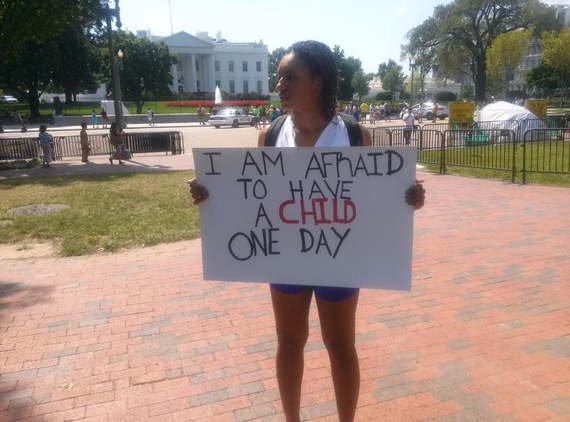 Last week I made a trip to Cleveland with fellow activists from Washington, D.C. and Ferguson, MO to support grassroots organizing in the local community.

"It's probably fake, but you know what, he's scaring the (expletive) out of (inaudible). ... He's sitting on the swing right now, but he keeps pulling it in and out of his pants and pointing it at people. Probably a juvenile, you know? ... I don't know if it's real or not, you know?"

Two officers were dispatched to the scene. The officers did not receive details from the 9-1-1 call regarding Tamir's estimated age or the gun being a toy. According to reports,Tamir Rice was commanded to put his hands up before shooting him. However, the surveillance video below from The Guardian shows the Officer Loehmann opened fire on Rice while simultaneously stepping out of the squad car.

Buzzfeed reports Cleveland Deputy Chief Loehmann confirmed Loehmann shot Rice within "1 ½ to 2 seconds" of arriving at the scene. The officer who called in the shooting into the dispatcher reported, "Shots fired, male down, black male, maybe 20." It was also later revealed that Tamir's body laid wounded for nearly four minutes before he received any medical treatment

When our group arrived in Cleveland, we met local community members in the space Tamir's life was taken. The space in which we gathered manifested a particular kind of anguish inside me that I find nearly incommunicable.

If a community playground is not a safe space for black children, do any exist?

After Tamir's death, there was a toy gun buyback campaign launched in Cleveland in mid-December. In the wake of Tamir Rice and John Crawford, who was also killed by police in an Ohio Wal-Mart while holding an air rifle, barring toy guns is certainly the most rational choice. However, it is extremely disheartening that black children must circumvent common juvenile behavior to protect their livelihood, while their white counterparts do not experience the same risks.

In March, the American Psychological Association published a study indicating black boys are perceived as older and less innocent than their white counterparts by police officers.

Researchers tested 176 police officers, mostly white males, average age 37, in large urban areas, to determine their levels of two distinct types of bias -- prejudice and unconscious dehumanization of black people by comparing them to apes. To test for prejudice, researchers had officers complete a widely used psychological questionnaire with statements such as "It is likely that blacks will bring violence to neighborhoods when they move in." To determine officers' dehumanization of blacks, the researchers gave them a psychological task in which they paired blacks and whites with large cats, such as lions, or with apes. Researchers reviewed police officers' personnel records to determine use of force while on duty and found that those who dehumanized blacks were more likely to have used force against a black child in custody than officers who did not dehumanize blacks. The study described use of force as takedown or wrist lock; kicking or punching; striking with a blunt object; using a police dog, restraints or hobbling; or using tear gas, electric shock or killing. Only dehumanization and not police officers' prejudice against blacks -- conscious or not -- was linked to violent encounters with black children in custody, according to the study.

While this study tests a sample of police officers in the United States, it illuminates the dehumanization and maturation ascribed to youthful black bodies. A law enforcement culture that indoctrinates officers with these notions proves to be deadly for black life.

In essence, the research depicts how black children are deprived of experiencing childhood. Black children are not afforded the privilege of engaging in normal child-like behavior because black bodies are characterized with unwarranted threat. Often black bodies exhibiting normal behaviors are weaponized, such as 12-year-old Tamir Rice who was shot and killed for playing with a toy gun at a playground.

Responsible for the death of Mike Brown, St. Louis County Police posted a repugnant message on its Facebook page essentially victim-blaming Tamir Rice for his own death. The language of the Facebook post disturbingly attempts to rationalize Tamir's death with problematic respectability politics fit for an adult. Unfortunately, knowing that black children must bare the same level of responsibility as adults when approached by officers or it may cost them their lives is a tormenting reality we have always faced in this country.

And for that reason, I live in fear for my unborn children.