Parents, bystanders and Internet users alike are calling Kansas police officer Andy Black a hero for the way he helped a mom at a local shopping mall.

Photographer Jilli Nel captured the below photo of Officer Black feeding and comforting a baby girl while paramedics helped her mother onto a stretcher after she suffered a seizure. 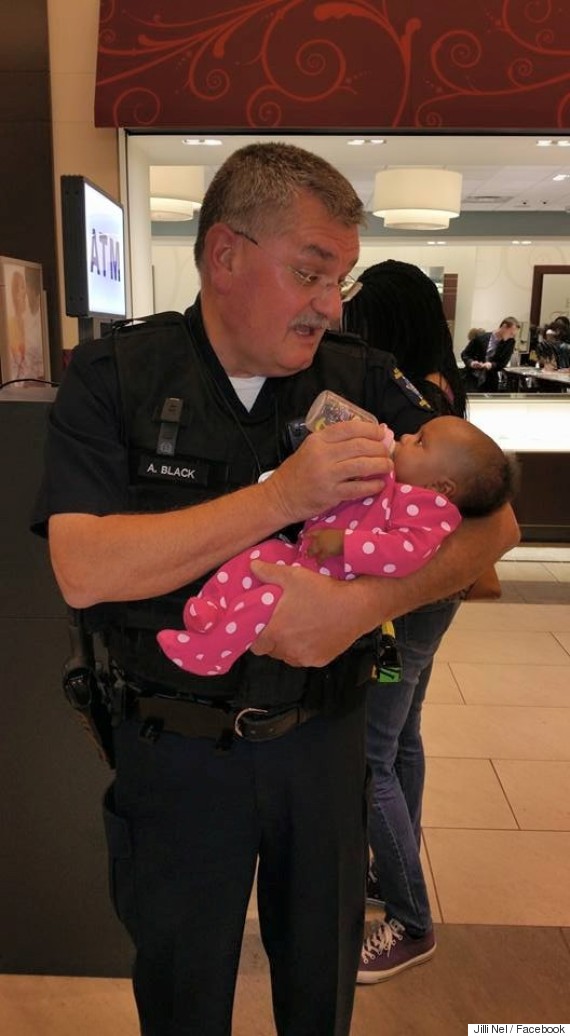 When she shared the photo on Facebook, Nel wrote, "This is what we don't get to see... the times of the quiet hero...going beyond his duty." She added, "My heart was Sooooo warmed."

The photographer implored her followers to share the photo and sent it to multiple local news stations, catapulting the image to viral fame.

In an interview with Kansas City's Fox 4 News, Officer Black said that he's been working off duty at Oak Park Mall for 25 years. While at work on May 30, he was called to assist a woman who had suffered a seizure.

When he arrived on the scene, the mom was still a little disoriented and she tried to pick up her baby from the carrier and give her a bottle. Worried that the woman had not fully recovered, Officer Black offered to hold the baby. "When she gave her to me, she handed me the bottle,” he told the local news station. “The baby started crying."

As an experienced grandpa of 14, Officer Black knew what to do. "I took the bottle, and I fed the baby,” he said.

His simple act of kindness did not surprise his colleagues. Officer Gary Mason of the Overland Park Police Department told BuzzFeed News that the photo captures how “humble” Black is. “He is always willing to give of himself to others,” Mason said.