Elizabeth Daly's terrifying ordeal has gone viral. In April, the 20-year-old college student and her friends were jumped by a team of undercover agents from the Virginia Department of Alcoholic Beverage Control. The girls were jumped in the parking lot of a grocery store because the agents mistook a case of bottled water they'd purchased for alcohol. One agent pulled a gun as another jumped on the hood of Daly's car.

Incredibly, Daly was arrested, jailed and charged with assaulting a police officer because in fear, she attempted to flee her attackers, and apparently grazed one of them with her car. Daly spent a night in jail and, incredibly, didn't have the charges against her dropped until last week. Now we have the 911 audio from one of Daly's friends who was in the car at the time. You can hear the panic and fear in the women's voices. And all in response to actions taken by the government employees who are supposed to protect them.

Now that the story has percolated in the public for several days, there are a lot of lingering questions. Here are a few of them:

-- Even if that is standard procedure (and if it is, that's outrageous), how did these particular agents know that Elizabeth Daly was underage? Since she wasn't purchasing alcohol, she wouldn't have been carded in the store. Did an agent check her license plate, and somehow cross-check that with her date of birth? If not, it means that not only did these agents dressed in street clothes jump and pull a gun on a group of college women in a parking lot after dark for the petty crime of purchasing alcohol before the age of 21, and not only were they wrong about the fact that that crime had been committed, they jumped these women before they even knew for certain that they were underage.

-- If Daly hadn't realized the men who just confronted her were cops, and if she'd attempted to drive away, would the agents have fired their guns at her? If they had, would the ABC have considered them justified in doing so?

-- Why are ABC agents armed in the first place?

This is only the latest incident in the creeping use of more police force to enforce increasingly petty crimes. In fact, just a couple weeks ago, a dozen government officials -- some of them armed police officers -- raided the Family Wash bar in Nashville in what police claim was an inspection to be sure the business was complying with the state's alcohol regulations. Owner Jamie Rubin told the Tennessean, "They may want to call it a ‘spot check.’ But you can talk to anybody that was in there – employees, patrons – it was a raid. That’s what it was.”

A few years ago, I wrote about a 50-man police raid of a Manassas Park, Virginia, pool hall on lady's night. Here's what it looked like:

The raid was clearly a drug search, but the police didn't have enough evidence to get a search warrant. Instead, they brought along inspectors from that same Virginia Alcoholic Beverage Control board, which they claim made the raid not a criminal search, but a regulatory inspection. Owner David Ruttenberg's subsequently filed a lawsuit alleging that sending a 50-member police team -- some in ski masks carrying shotguns -- was an unreasonable amount of force to bring for an alcohol inspection. The 5th Circuit Court of Appeals disagreed. They dismissed his lawsuit.

In 2010, police in New Haven, Connecticut sent a SWAT team to raid a bar that investigators suspected wasn't being vigilant enough about underage drinking. And it isn't just alcohol. I've also written about other examples of using this sort of force for other regulatory inspections, such as occupational licensing.

The other issue here, though, is that Daly was initially charged with assaulting a police officer. I wonder, would that charge still have been dropped if Daly had just illegally purchased alcohol? And when cops in street clothes jump out on citizens with their guns waving, how are we to know that they're actually cops? Are we really supposed to wait to see if the men running at us with guns might be law enforcement before we attempt to flee? Daly's attorney pointed out that she had just attended a symposium about sexual assault on campus. Is the Virginia ABC telling college women in Virginia that if one or more armed men run at them in a parking lot after dark, they should stay put in their cars, just in case the men might be law enforcement officers enforcing the state's underage drinking law?

It's an extraordinarily absurd use of force in and of itself. But it also isn't difficult to see how these sorts of tactics could lead to tragic outcomes. A good example is the story of Jonathan Ayers.

Ayers was a Georgia pastor who made the mistake of counseling and ministering to troubled women who also happened to be under investigation for drug offenses. In 2009, an undercover team of cops who had the woman under surveillance saw Ayers pick her up and give her some money. Ayers was actually giving her the cash out of his wallet to help pay her rent, so she wouldn't be evicted. But suspecting they now had a more upscale suspect, the police followed Ayers as he left the motel where the woman was staying. They followed him to a convenience store, where withdrew some cash from an ATM.

When Ayers returned to his car, a black SUV screeched into the parking lot, and a team of narcotics cops toting guns and dressed in street clothes ran at his car. Ayers threw the car into reverse and attempted to escape. The police opened fire, killing Ayers. According to a nurse at the hospital where he died, Ayers' last words were that he thought he was about to be robbed.

A subsequent investigation of the incident by the Georgia Bureau of Investigation -- which the local DA claimed went to "very extraordinary lengths" -- cleared the cops of any wrongdoing. The report concluded that Ayers was mostly to blame, and that he should have known by the badges hanging from their necks that the men running at his car were cops. Here, by the way, is what one of the agents was wearing that day: 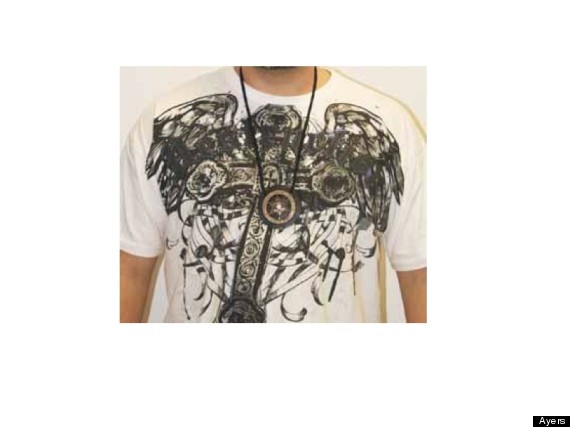 There's one other lesson from the Ayers story. The Virginia ABC board apparently already reviewed a complaint from Daly and determined that its officers had done nothing wrong. That means that either this sort of action is either standard procedure, or at the very least doesn't violate any Virginia ABC rules or guidelines for alcohol enforcement. They've now agreed to look at the incident again, in light of media scrutiny. That second review is ongoing.

With Ayers, recall that the Georgia Bureau of Investigation review found no wrongdoing on the part of the cops who killed the young pastor. But an investigator hired by Ayers' widow later discovered that the police officer who shot the pastor wasn't even legally authorized to arrest him. He hadn't completed the necessary training. Here's the kicker: The officer had also yet to receive any training on the use of lethal force. For some reason, the investigation that went to "very extraordinary lengths" to look at the case impartially had failed to turn any of that up.

The state of Virginia needs to take a long, hard look at the tactics used by its alcohol enforcement officers. If the Virginia ABC board again determines that its agents did nothing wrong, then the state's politicians need to step up and reform the Virginia ABC Board. If something doesn't happen, it's probably only a matter of time before the state produces a Jonathan Ayers of its own.

Radley Balko is author of the new book Rise of the Warrior Cop: The Militarization of America's Police Forces.