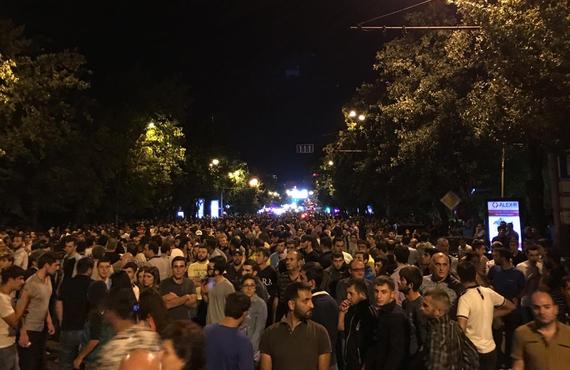 The 31 armed men who took over a police station in Armenia's capital of Yerevan on July 17 made two demands that got widespread news coverage.

After the 20 men who were still in the station on July 31 surrendered, the group made another appeal to the public.

This time it wasn't a demand. It was a entreaty that they embrace what they felt was another important political objective. That objective was for Armenia to stop being a Russian colony and become independent in fact as well as in name.

One of the group's demands when it seized the police station was that the government release the man they considered their leader -- Jirair Sefilian, head of the Founding Parliament fringe political party. Authorities had arrested Sefilian in mid-June on a charge of plotting a coup.

The other demand of the occupying group known as the Daredevils of Sassoun was that President Serzh Sargsyan resign.

The government wore down the Daredevils during the siege, cutting off their water, food, electricity and cellphone service, and wounding several of them with sniper fire.

Hardening authorities' determination not to compromise was the fact that two police officers died during the occupation. One was shot during the initial takeover and the second by sniper fire halfway through the siege.

The Daredevils are now going through the justice process. They face long prison terms, but they are still defiant, maintaining that they are not common criminals but prisoners of war.

A longtime political activist decided on the very day that the Daredevils surrendered to try to increase public awareness of their contention that Armenia needs to stop being a Russian vassal.

Tigran Khzmalyan stood in front of a small group of Daredevils sympathizers outside Yerevan's Opera House to read an online post the Daredevils had made.

"Today all the processes in our country are governed from outside," he quoted the Daredevils as saying. "I am speaking about Russia."

"We want the people, and the international community, to realize that this is a national liberation movement against Russian colonialism," the Daredevils said.

Although the Daredevils represent a political fringe group, many Armenians believe as the Daredevils do that their country needs to cast off its Russian shackles.

Russia owns the country's electrical system and supplies it with most of its gas, making Armenia beholden to the Kremlin for its energy needs. The Russian electricity company's decision to raise electricity rates 17 percent last summer led to tens of thousands of people protesting nationwide.

Many Armenians also resent Russian President Vladimir Putin bullying Sargsyan into dropping Armenia's plan to join the European Union and instead joining the Kremlin-led Eurasian Economic Community. Sargsyan's about-face in the fall of 2013 was greeted with demonstrations in Armenia, and additional street protests when Putin visited the country later that year and in 2014.

Many Armenian intellectuals and young people in particular resented Putin's interference in Armenia's effort to shape a better economic future by looking toward Europe.

There is also growing resentment about what many Armenians see as Russia's interference in the Nagorno-Karabakh situation.

Putin has been personally trying to mediate a settlement of the longstanding dispute, which flared into open warfare in April of this year.

The ethnic Armenians living in Nagorno-Karabakh fought a war with Azerbaijan over the enclave from 1988 until 1994. Both sides continue to claim that the area is theirs, with flare-ups in fighting punctuating their claims.

Putin has said publicly that the two sides need to reach a compromise on the issue.

Armenians, who of course back their ethnic brethren in Nagorno-Karabakh, are afraid that Putin will demand, as one term of compromise, that the enclave cede some of its land to Azerbaijan.

Many of the Daredevils of Sassoun fought in the Nagorno-Karabakh War between 1998 and 1994, as did Sefilian, so they are dead-set against a settlement involving loss of land.

Many Armenians also resent the fact that in recent years Russia has been selling arms to both Armenia and Azerbaijan.

Russia has justified sales to both sides as an attempt at maintaining balance in the region.

It has also said that if it weren't selling arms to the Azerbaijanis, somebody else would be. The gist of that cynical message: Why should we give up profits that we don't have to give up?

No polls on Armenian public sentiment about Russia have been taken for at least two years, as far as I know.

So there are no figures to confirm the anecdotal evidence I'm seeing that indicates more Armenians are becoming tired of being a Russian colony.

Thousands of protesters turned out to support the Daredevils of Sassoun during the police-station siege, indicating that the group had succeeded in galvanizing opposition to the government that went way beyond the membership in the tiny Founding Parliament Party.

Will their movement also stoke a broader effort for Armenia to get out from under Russia's thumb?

I wouldn't bet against it.