Much has been written about parenting philosophies concerning gendered toys, clothes, lunch boxes, etc. While there are lots of boys who like Frozen as much as any girl, I have two sons of the fire truck/construction vehicles/dinosaur/sports variety and I can admit to encouraging these interests. I admit to being very happy about not having to grapple with any daughters going through pink princess phases. I respect and support my friends indulging and resisting those tendencies with their daughters as best they can. In a similar vein, I promise I won't judge you if you get toy guns for your kids, as long as you won't judge us for being one of those families that doesn't. My husband has requested that I avoid getting any clothes with camouflage patterns because of the militarism associated with it. And while I am happy to indulge my boys in fire truck backpacks, t-shirts, and a bin filled with fire rescue vehicles, I have intentionally avoided doing the same with police-themed paraphernalia. 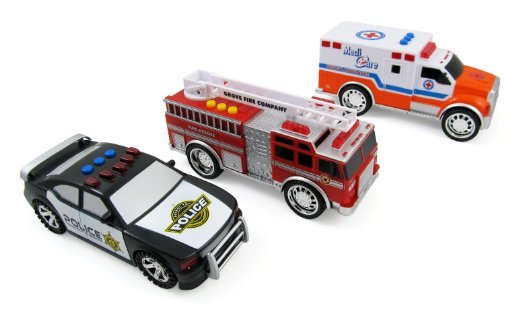 This was the year of "the talk." Millions of families have been having "the talk" every year, but this was the year White parents, and so many others, started to engage in conversation about the fact that parents of Black and Brown children need to have a special conversation about behavior and conduct with police. The #BlackLivesMatter movement built on the outcry and outrage from so many communities nationally, has thankfully pierced the mainstream discourse bringing attention to institutional racism and how it impacts our lives, including parenting.

This was also the year of, and I hate to bring it up again, the Rachel Dolezal phenom. A friend commented that she wondered if Rachel Dolezal had a photo of me on her Pinterest board when getting her look together. Ha ha. Very. Funny. One of the many realities a white person imitating my "look" didn't have to deal with as a child, was having her father pulled over by a cop not simply because he was driving while Black, but because he was driving while Black with a White woman (Mom) in the driver's seat and a pale-skinned little girl (me) in the back.

My first "talk" with my oldest son was probably when he was four. My mother died of cancer in 2000. My father is the grandparent living closest to us and most called upon to pick up my son from school. He is also my sons' only Black grandparent (the others are White). We live in an incredibly diverse neighborhood filled with multicolored families, but my father was still pretty anxious about his babysitting role. What if my son had a temper tantrum (not unheard of) and people were wondering who this old Black guy was trying to move him along? We intentionally had a photo taken of me, my dad, and my sons, which I then had put on a keychain for my dad to carry in case he was ever stopped by cops. I had to tell my oldest that he had to make sure to let anyone and everyone know that grandpa was his grandpa--especially a police officer if one ever asked -- because sometimes people might not think he is because of what he looks like.

When our family was in Tompkins Square Park this summer, my 3-year-old interrupted me mid-rant to ask why I was angry again about the mobile watchtowers recently stationed in our neighborhood. (I mean, look at this s#%t!) After much protest, the police removed the one from the park, but we see the "SkyWatch" towers every day stationed by the public housing down the block from us. I find them terrifying, infuriating, absurd, and grotesque all at once. In my research on the things, I found an anthropological blog asserting that they may be agents of gentrification, and noting that a watchtower is known colloquially as "the Octopus," which is now what I think of whenever I see one. 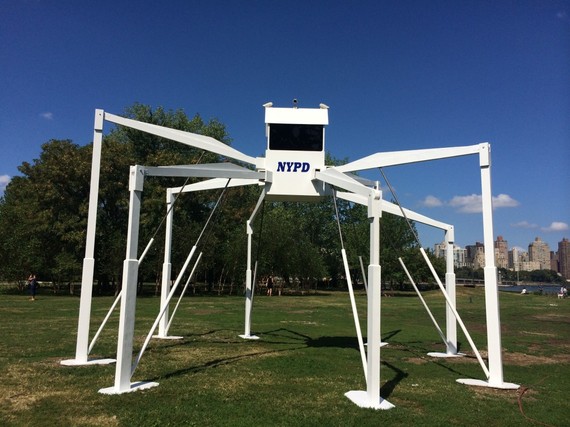 Police violence is more than something to be horrified by, it's the symptom of an institution to question and reject. I actually don't generally believe in being pedantic about my beliefs with my children. I avoid dragging my children to rallies and public actions because I want them to make their own choice about what to be passionate enough about to show up for. One of the most important values my husband and I want to pass on to my children is the importance of critical thought. I want them to question concepts of punishment and legality. I want to engage them in conversations about how to restore harm, how to learn from our mistakes, how to keep everyone safe, and how our society can be fair for everyone. To me this means not having an excess of toy police cars in our home. Not because I'm trying to teach them to hate cops, but because I don't want to ingrain them to think our current policing system is necessary. Another way is possible, and we can be dreaming and working towards that way all the time.

There is a lot I can say about raising white-appearing boys with a white husband while appearing to be... it truly depends on the viewer. Trust me, whatever you think I look like -- that does not reflect what most people think. There is no consensus. The most important thing to me is that my children know who they are despite what others might tell them they are. They are fourth-generation socialist Jewish-Americans, fifth-generation free from African slavery, third-generation Black college graduates (eventually, I expect), as well as fourth-generation, blue-eyed Norweigan-Americans, and fifth-generation Lower East Siders. Race is often, but not always, about how you look. For some, racial identity can be a very political choice in America -- not in a Dolezal way, but by not letting skin privilege erase one's most politically disenfranchised heritage.

I speak critically about policing with my young children not because I'm worried about them being singled out as black boys. I am free from not living with that particular terror, but terror is still there. The Octopus on Avenue D petrifies me, and my dad, more than the local gang violence; I don't trust the bullets in anyone's gun -- certainly not those that are shot with impunity. I want my sons to know I have an opinion, and that it is informed by our heritage. Sharing that opinion is one of many ways I share that heritage with them.