For those of us born in the USA in the 1940s, there were three kinds of terrorism: the terrors posed by World War II enemies and the prospect of losing a (future) father, brother, nephew; the incipient terror of the atomic bomb and nuclear war; and the terror of paralytic poliomyelitis (a home-front home-grown terrorist). The polio virus twisted limbs, maimed and compromised the respiratory systems of its victims, mostly children, many of whom could only breathe with the aid of iron-lung encapsulation. 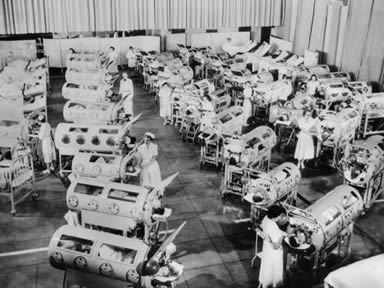 A 60th anniversary
On April 12, 1955, Dr. Jonas Salk's vaccine was officially declared to be effective and full-scale inoculation efforts were set in motion. Banner newspaper headlines proclaimed the godsend. 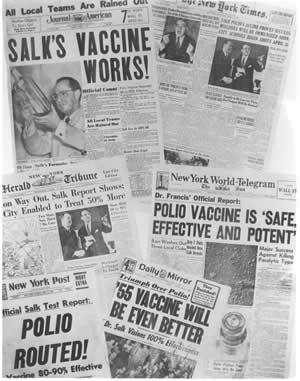 In an informal survey of undergraduates conducted by me and several colleagues (at a university and a community college), we found that while some students have some awareness of polio, there was scant recognition of the name Jonas Salk. By contrast, a fair portion of those surveyed recognized the name Nick Jonas, the singer-songwriter "multi-instrumentalist" of the pop-rock band the Jonas Brothers.

The fact that so few know of Jonas Salk, the medical researcher and virologist who developed the first successful vaccine against polio, is evidence of how effective his efforts at eradication were, at least in the USA.

While the vast majority of students polled know of someone afflicted with cancer and understand cancer's consequences, very few had a clear sense of what polio wrought. As if the timing had been ordained, an experimental treatment for cancer is bringing polio back into the news.

Spring 2015: Polio virus makes news -- good news
By extraordinary coincidence, recent "60 Minutes" segments highlighted the cancer-eradicating potential of a genetically-engineered strain of the deadly polio virus. The modified virus, which is being infused into the brains of glioblastoma patients (at Duke University's Brain Tumor Center), seems to thwart those particularly lethal cancer tumors.

An expensive undertaking, to be sure. The March of Dimes, which was founded in 1938 by polio-victim Franklin D. Roosevelt, was instrumental in raising funds that helped bring about a cure for polio. A 21st century March of Dollars will be needed to increase the arsenal of immunotherapy agents.

What polio wrought
The scourge of polio was depicted in Philip Roth's novel Nemesis. For the most part, it's not an exciting story, and the first two of three chapters (the first 237 pages, of 280) are not especially lyrical. But the concluding 43 pages -- Chapter 3 "Reunion" --are quite moving and poignant.

The narrator of the story is finally identified and his conversations with the protagonist -- who was a junior-high phys. ed. teacher and boys' playground supervisor back in Newark, New Jersey's equatorial summer of 1944 -- remind us of polio's toll: "monstrous headache, enfeebling exhaustion, severe nausea, raging fever, unbearable muscle-ache; followed by paralysis." Then, weeks of catheterization and enemas; respiratory salvation in an iron lung; re-educated limbs set in body casts; surrender to disfigurement with mobility occasioned by steel-and-leather leg braces, crutches and wheelchairs; and, in a terrifying number of cases, surrender to respiratory failure and expiration.

We are given to appreciate the surrendering of hopes and dreams that were once within the realm of navigation, but which were irretrievably maimed by polio.

We are given to ponder chance, fate and blame-worthiness.

The unbearable heaviness of being
The phys. ed. teacher who directs playground athletics, in the summer of 1944, has "the cast-iron, wear-resistant, strikingly bold face of a sturdy young man you could rely on."

Polio deforms his psyche as well as his body. In 1971,

There was no lightness in him. That was missing, as were the energy and the industry that were once at the center of him. And, of course, the athletic ingredient had completely vanished. It wasn't only an arm and a leg that were useless. His original personality, all that vital purposefulness that would hit you in the face the moment you met him, seemed to have been stripped away, lifted from him in shreds as though it were a thin swatch of bark peeled from a birch tree....


We are allowed to "see" the once-taut face of an athlete that polio and self-blame have "interred in a fleshier face, a concealment that people often see when looking with resignation at their aging selves in the mirror."

We are allowed to "hear" a pouring forth that is "neither an unburdening nor a remedy so much as an exile's painful visit to the irreclaimable homeland... that became the site of his undoing."

Reluctantly, we come to feel the shame of someone who burdens his already-burdened body with presumed blame for being a carrier and conveyor of the crippling virus.

At the same time, we want to exonerate the phys. ed. teacher who had indicted, convicted and sentenced himself to a confinement as severe, in its ways, as the imprisonment of his leg braces and the prospect of recidivism into a wheel-chair.

Guilt and "Spiritual Extinction"
How did the polio contagion spread? Was it harvested at public drinking fountains or through milk bottles? Did it stream from swimming pools

or was it the side dish at the hot dog shack? Did it migrate hand-to-hand, via the opening of mail or the exchange of paper money? Did it transfer by way of a baseball bat, a catcher's mitt, a shared soda-pop bottle? And how did the virus get to those things in the first place? The phys. ed. teacher assigns blame to himself.

What can the narrator say to the self-blamer who is crippled emotionally as well as physically? The phys. ed. teacher has allowed his life to be deformed and paralyzed along with his limbs. His life withered along with his arms and his legs.

The narrator relates the history of a sufferer who is "crippled physically by polio but no less demoralized by persistent shame," and is "the very antithesis of the country's greatest prototype of the polio victim, FDR." The narrator is unable to get the once-admired once-inspiring seemingly-invincible phys. ed. teacher "to see himself as something more than his deficiencies and begin to liquidate his shame."

Remembrance of things passed
For those of us who were spared by fate and vaccine, Philip Roth's Nemesis charts polio's course and brings to mind the friends and neighbors who suffered the withering and the life-long incarceration of limbs. We consider the lives that are lived without the life once contemplated.

In the novel's most-memorable concluding pages, the narrator reminds us that the phys. ed. teacher had quietly, unassumingly, savored his moments springing from a high-dive platform to plunge majestically into pre-polio waters.

The phys. ed. teacher's playground charges had rightly been awed by his "primordial" track-and-field prowess as a competitive javelin-thrower. His preparations and launches are soaring reads.

The narrator's recountings are all the more searing in that he has had to make his way in the world with the leg braces and crutches that marked him as a polio victim.

Just prior to the javelin-throwing demonstrations described in the novel's concluding pages, the narrator lets us in on his own career arc -- his own physical and psychological trajectory:

There was plenty of bitterness growing up with a pair of stick legs. For years I lay in bed at night talking to my limbs, whispering, 'Move! Move!'.... In school, the girls pitied me and the boys avoided me. I was always sitting brooding on the sidelines. Life on the sidelines makes for a painful adolescence. I wanted to walk like everyone else. Watching them, the unbroken ones, out after school playing ball, I wanted to shout, 'I have a right to be running too!'.... For a while I didn't want to go to school at all -- I didn't want to be reminded all day long of what people my age looked like and of all they could do....

The narrator's pain is a good reminder, for all of us.

Note: Newspaper composite courtesy of The March of Dimes Foundation.

Columnist, PsychologyToday.com and The Fiscal Times