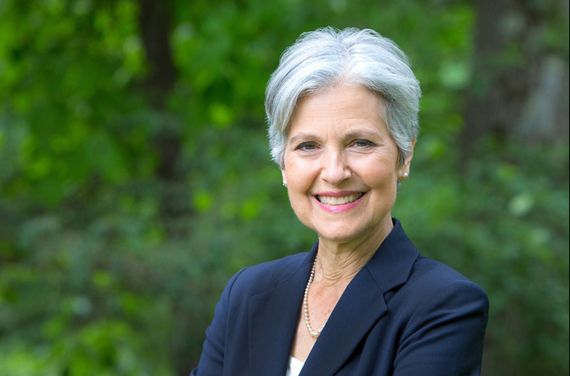 Nature abhors a vacuum. With the Democratic establishment over time steadily moving to the right, cracking down on civil liberties though increased surveillance and militarization of police, strengthening corporate control through agreements like TPP, disregarding the environment resulting in fracking accidents and poisoned watersheds, and supporting increasing military expenditures to fund a new trillion-dollar nuclear arms upgrade program and systematic regime changes and ongoing warmongering abroad, someone has to fill the gaping hole, the vacuum on the left.

Bernie Sander's rock-star popularity has been result of exactly that phenomenon. Now that he essentially exited the race, the vacuum in the political atmosphere has reappeared. Yes, pushed by Bernie, the Dems moved the party platform left on several important domestic issues. Was it convincing? Was it enough of a bargain? What the unconvinced Independents and millennials will do is the game-changing question. Don't let the pundits answer it for you. They can't.

In this eye-opening campaign season Bernie has removed a lot of the shine from the already tired Capitalist machine, giving a strong voice to the Left. He also gave hope to the people that have had enough regardless of their political affiliation. The rise of Independents, who are now the largest voting block in the US at 43% reflects that majority of Americans feel unrepresented by Republican and Democratic duopoly.

We have learned in these elections that progressive values, lets call it "the Left" for lack of a better word, isn't just alive in the U.S., it's in the zeitgeist, at the heart of the millennial generation. Older Americans may be lost as to why socialism is so appealing to young people. One of the answers is that what they define as socialism doesn't look as grim as what generations before them where trained to believe. They are envisioning not a Soviet style but European socialism with free healthcare and education, strong labor rights and long paid vacations along with civil liberties and free enterprise.

What we have also learned is that American people at large are more caring stewards of the Earth than their leaders, more progressive in their majority than two parties on energy policy. Americans are overwhelmingly anti-nuclear, anti-fossil-fuel and pro-renewable. Bernie Sander's platform reflected their desire to move from fossil fuels and nuclear energy to completely renewable clean energy.

Staunch Democrats also have hard time getting it, but for many Independents and millennials there isn't enough difference between the Democrats and Republicans (that Clinton and Trump are the least popular candidates in history don't help). There is nothing unreasonable or cynical in it. Let me illustrate with just one example why the lesser evil argument doesn't work for someone like me.

Look at America from the outside, in terms of foreign policy. Jimmy Carter was most proud that he didn't start a single war, didn't drop a single bomb, and talked about keeping country out of war as the most important work of the president. It really scares me that some Americans don't see resource wars and war profiteering as unacceptably evil as long as "their" party (Republican or Democrat) is in charge, even though human lives are being destroyed by the millions and lands scorched. I am lost and distraught at how people can't see that as unacceptable. If you can see this, you'll understand why after initial grieving for Bernie, many of his supporters will likely be looking for alternatives to Clinton and Trump.

And here's where the Green Party's Jill Stein comes in. With Bernie's exit, she is the progressive alternative.

Ralph Nader presciently noted in 2000 that there was little to no difference between the Democrats and Republicans, but US voters en masse were not ready for this message. Now with the rise of Independents and millennials, a large portion of the population is ready to move on. Bernie or Bust was their rallying cry until he exited last week, and now they are pouring resources and support into Jill Stein's campaign, with donations increasing over 1000% in a couple of days.

Just recently it was unthinkable that an Independent or Green candidate could win the Presidency. But then no one anticipated massive swell of support for Sanders, and the underlying economic and environmental conditions in the US that drive this popularity are only getting worse with each Democratic or Republican administration.

Inspiring left-wing, Jill Stein understands that. There may be a perfect political storm happening right now that will result in unexpected and just recently unimaginable rise of the Greens in the US.

How is that? Let's just do the math. Considering that only 1 out of 10 voters in the US know about Jill Stein, she is polling between 4 and 6 percent nationally. And that's a very respectable number. This informal poll of readers conducted by The Guardian day after Bernie's endorsement of Clinton shows that Jill Stein was the most popular among respondents, with more than double the number supporting her over Clinton.

What would Jill do? Her vision is similar enough to Sanders that she has invited him to lead the Green Party ticket. From an environmental perspective she has the best policy. She is strongly anti-war and strongly pro free college education. She goes even further than Sanders cutting military spending in half, proposing emergency measures to curb the effects of climate change, abolishing nuclear weapons, and abolishing all existing student debt.

She speaks with conviction and passion to the left-leaning, anti-war and environmentally aware Democrats, Independents and millennials. She is courageous, consistent and articulate. If she gets 15% in national polling, she will become a part of televised presidential debates and the majority of voters will discover her for now and for the future.

The future, expressing itself in millennials, belongs to the Left, and if the Democratic establishment keeps their center-right trajectory, the future may flock to Jill Stein with the force of a tsunami. And that will be a huge political climate change in the US. On the backdrop of Earth-wide climate change a perfect political storm is in the air.