WASHINGTON -- When Joe Ricketts, the founder of the brokerage firm TD Ameritrade, had an itch to spend $10 million on an anti-Obama ad campaign, Fred Davis, the well-traveled conservative media consultant, was there to help him craft a plan.

Davis is known for producing memorable, offbeat and sometimes controversial ads. He put together the infamous "Demon Sheep" spot for Carly Fiorina's California Senate campaign, the "I'm Not A Witch" ad for Christine O'Donnell in Delaware, the racially tinged "Debbie Spend It Now" ad for Michigan Senate candidate Pete Hoekstra and an introductory clip for presidential candidate Jon Huntsman that featured a dirt biker tearing through the Utah wilderness.

For Ricketts, Davis suggested an ad campaign attacking President Barack Obama for his ties to his former pastor, Reverend Jeremiah Wright -- controversial subject matter designed for maximum impact. But the campaign never made it into production after an advertising plan was leaked.

Ricketts' solicitation of Davis highlights an oft-bemoaned trend in campaign spending, which has been further exacerbated by the explosion of super PACS: Consultants are reaping bigger rewards than ever before. As The Huffington Post reported Tuesday, the top 150 consulting companies have already grossed more than $465 million during the 2012 campaign, much of which has come from outside groups.

And it doesn't seem to matter how their clients do. Davis's work generates a lot of buzz, and has enjoyed occasional success -- his infamous "Build The Dang Fence" spot for Sen. John McCain (R-Ariz.), for example, helped McCain fend off a 2010 primary challenger. But often it hasn't done the trick. He was able to attract Ricketts' business even though Hoekstra was widely condemned for his ad and Fiorina, O'Donnell and Huntsman all ended up losing.

Critics of consulting's influence on politics say that changes to the campaign landscape have further entrenched certain consultants, regardless of their track records.

"I'm quite defeated about it," said Markos Moulitsas, the founder of progressive blog Daily Kos, who has been a longtime critic of the political consulting industry, particularly its influence on the Democratic Party. "It's an incestuous world where a small group of hacks rotate between running the party and consulting, and they all shovel campaign contracts to each other. If you want party money, you hire their friends."

Since consultants rarely advertise the work they do on behalf of losing clients, it's difficult to assess who is part of this group. But a few examples are available.

The Washington Monthly highlighted the failing-upward dynamic in 2005, pointing out that Joe Hansen, then the field director of for the Democratic Senatorial Campaign Committee, had lost seven of the nine campaigns on which his firm consulted in 2002. The magazine noted that Mark Mellman, the prominent Democratic pollster, was hired by John Kerry's 2004 presidential campaign despite logging a similarly bad record advising Senate candidates two years prior.

More recently, consultants like John Weaver, best known for his work on McCain's presidential campaigns in 2000 and 2008, reportedly received more than $650,000 to help Huntsman with his presidential bid. Joe Trippi, who worked on behalf of Howard Dean in 2004 and John Edwards in 2008, has done work for a number of congressional candidates, with his firm bringing in more than $790,000 total, according to federal records. 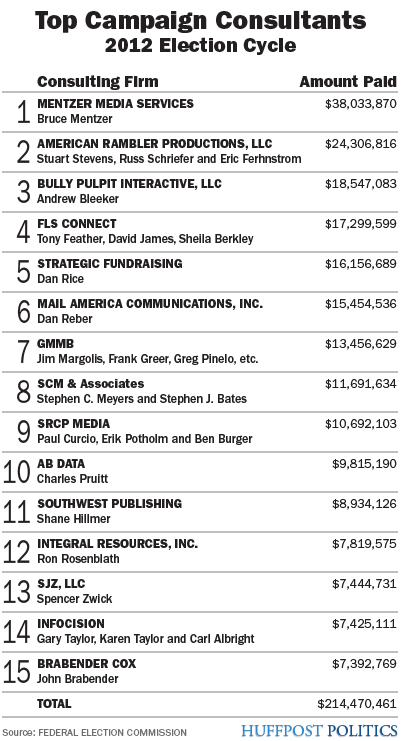 Failure, in the consulting world, is a subjective term. And often the big defeats do end up overshadowing the victories. Davis didn't return a request for comment, but one fellow Republican consultant said his work was "often the most innovative feature of the campaign he's consulting." Trippi helped Dean become the first presidential candidate to tap into the organizing and fundraising capacity of the internet -- a massive, if not historic, achievement for which he earned subsequent business, despite Dean's loss. Trippi has also had high-profile wins amid the presidential losses, including Jerry Brown's 2010 gubernatorial run in California.

"My own view is that anyone who succeeds to the level where people are concerned about how much money they are making had to be good to get there," Trippi said. "I don't remember anyone asking about my payments when I was [in my younger days] making $15 a day in Iowa freezing my ass off."

For consultants, indeed, the notion that they should be judged by a win-loss count is inherently unfair, given that campaigns are inevitably more complex than their final results. A consultant could offer insightful advice, they argue, only to be overruled by the candidate or a colleague. He or she could be brought on board a drowning ship, with not enough time to save the campaign.

"The reality is that political consultants in some instances, not all, are much like emergency room doctors," said Dale Emmons, president of the American Association of Political Consultants, a trade group for the industry. "They get what is brought to them. And if you come to the emergency room, are dramatically injured, you may or may not have a survivable wound ... There is no single recipe or a biscuit-cutter that you can use for every situation."

If 2012 spending follows historical trends, as much as $3 billion will go to consulting companies and firms. Much of that will be used to buy television airtime, place phone calls, print pamphlets and the like. But a good chunk will be siphoned off as fees. In defense of those fees, consultants argue that their work is a subtle art form, and a valuable one as well.

"It is like having a great horse. If you don't put a jockey on the horse, the horse isn't going to win," said Ed Rollins, who has consulted for decades, sometimes scoring surprise wins (Christine Todd Whitman's 1993 gubernatorial race in New Jersey), sometimes falling short (Mike Huckabee's 2008 presidential bid), and sometimes burning bridges (Michele Bachmann's presidential bid in 2012).

"[With] a second- or third-tier horse, a great jockey can make a winner," Rollins said. "I can tell you if a spot is going to work, having watched hundreds of ads during my career. ... That may be a saving of a million or two million dollars compared to someone putting up a piece of shit that doesn't do anything."

Not all prominent political consultants were willing to defend their business or their fellow consultants. Privately, several expressed strong concern that the industry is being irrevocably branded as one that cares more about earning the next paycheck than maintaining ideological consistency. To that, Trippi said that his fellow consultants are "neither all slime balls in it for the money nor altruistic believers in the cause of their candidate."

Bob Shrum, a former Democratic consultant who is better known for working on failed campaigns, like Al Gore and John Kerry's presidential bids, than successful ones, like Kerry's 1996 Senate reelection campaign, said that the notion that consultants were merely in it for a check was "just flat wrong." But even he couldn't apply that statement universally.

"I would defend almost anybody except Dick Morris from that allegation," said Shrum. To which Morris, the Bill Clinton confidant-turned conservative consultant and commentator, replied: "The difference between Shrum and me is I win and he loses."

What's unique about the 2012 cycle is the increased opportunities for consultants to find work. They can be hired by Super PACs and other outside groups, which can spend unlimited amounts of money on campaigns thanks to the Supreme Court's 2010 Citizens United decision. And industry officials expect that the stream of money will flow from the federal races down to the statewide contests, allowing even those who aren't particularly strong at their craft the chance to cash in.