Favorable ratings of the Congressional party leaders drop, but change in Obama's job rating is glacial at best. Two new polls confirm previous trends in Virginia and New Jersey. And Nick Gourevich explains how pollsters can share the misery of unhappy sports fans. This is HuffPollster for Thursday, October 10, 2013.

POLITICAL LEADERS’ RATINGS DROP - Jeffrey M. Jones: “Americans' basic opinions of President Barack Obama and key congressional leaders are worse today than they were prior to the government shutdown. Net favorable ratings of Obama, House Speaker John Boehner, and Senate Republican Leader Mitch McConnell are at least 10 percentage points lower than before, with a smaller five-point decline for Senate Democratic Leader Harry Reid. House Democratic Leader Nancy Pelosi's image has by contrast improved slightly, but remains more negative than positive. The Republican congressional leaders, Boehner and McConnell, appear to have taken a slightly larger hit from the shutdown than the Democratic congressional leaders Reid and Pelosi, as well as President Obama, given slightly larger declines in the Republicans' net favorables.” [Gallup]

As does Americans’ satisfaction with government - Joy Wilke, on a separate Gallup poll: “Eighteen percent of Americans are satisfied with the way the nation is being governed, down 14 percentage points from the 32% recorded last month before the partial government shutdown began. This is the lowest government satisfaction rating in Gallup's history of asking the question dating back to 1971.” [Gallup]

Looking more closely at party favorability - University of Wisconsin-Milwaukee political scientist Thomas Holbrook: “The figure posted below summarizes the 'favorability' of both parties, using results from publicly available polls that asked respondents to rate their feelings toward the parties as either favorable or unfavorable. There are several notable patterns here. First, throughout this time period (February 2012 to October 2013), Democrats have held a distinct favorability advantage: the mean net rating for the Republican Party is --16.4, while the mean net rating for the Democrats is 1.2. In fact, there is not a single poll in this series of 44 polls in which the Republican party registered a net positive rating, and not a single case in which the net Republican rating was higher than the net Democrat rating….What do these data say about the impact of the government shutdown? Unfortunately, polls that include party favorability questions are too few-and-far-between to be able to pin much on specific events, and the figures presented here include only one poll taken since the shutdown began, the aforementioned Gallup Poll. In all likelihood, that poll does reflect the impact the shutdown, but it is only a single observation and it doesn't really have much effect on the overall trend in the data.” [HuffPost] 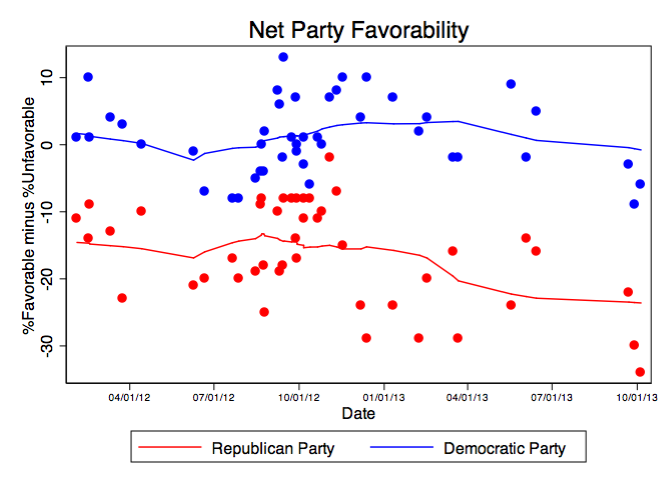 What about Obama's job rating? - Questions about whether Americans approve or disapprove of the job Barack Obama is doing as president are tracked on a daily basis by Gallup live interview and Rasmussen automated polls. They are also measured on a weekly basis by Ipsos/Reuters and Economist/YouGov (using opt-in internet samples) and the Democratic firm PPP (using automated calls). When their surveys conducted just before and after the government shutdown are combined and averaged, they yield little meaningful evidence of change. The Gallup and Rasmussen surveys suggest a slight drop in approval for the president of one 1 to 2 percentage points, although even with their massive combined samples, these slightly shifts may still be the result of sampling error -- due to random chance alone. The changes on the other surveys are all just a point or two.

The HuffPost Pollster chart, even when set to allow for less smoothing of the regression trend line, shows virtually no change before and after October 1. [HuffPost]

And Christie still far ahead in New Jersey - “Despite strong support for same-sex marriage, which New Jersey Gov. Christopher Christie is blocking, likely voters back the Republican governor 62 - 33 percent over State Sen. Barbara Buono, his Democratic challenger, according to a Quinnipiac University poll released today. In today's survey, women back Christie 59 - 36 percent, while men back him 64 - 30 percent. Christie leads 91 - 7 percent among Republicans and 71 - 22 percent among independent voters, while Democrats go to Sen. Buono 67 - 28 percent.”[Quinnipiac]

MIKE LEE’S SHUTDOWN APPROACH NOT BACKED BY CONSTITUENTS - HuffPost: “Sen. Mike Lee (R-Utah) has been one of the most prominent tea party voices in the budget showdown in Washington, but many of his constituents want to see him compromise, according to two new polls -- and his unwillingness to do so may have cost him some points. An online Brigham Young University poll of a panel of Utah voters randomly recruited at polling places, found that Lee's favorable rating is down 10 points, from 50 percent in June to 40 percent in October. Among his own party, his rating dropped from 71 percent to 57 percent….A 57 percent majority of Utah voters said Lee should compromise, even if that means passing a budget that funds Obamacare, while 43 percent wanted him to stand by his principles regardless of the shutdown….A second survey, conducted by Dan Jones & Associates for KSL-TV and Deseret News, found similar results in the state, with 56 percent of Utahns saying it wasn't worth shutting down the government to repeal Obamacare.” [HuffPost]

TO POLL OR NOT TO POLL? - Nick Gourevitch, on the dangers of polling during hurricanes and other disruptive events: “While natural disasters are an obvious case, pollsters often have to balance the need for timely data (and the needs of their clients) with the desire for accurate polling in an era of waning response rates. I can think of numerous cases when GSG has either delayed calling or adjusted our calling procedure to avoid certain individuals or areas. Sometimes this is due to concern over response rates or whether certain groups of individuals might be less willing to participate -- leading to an unrepresentative sample [such as religious holidays, Halloween or major sporting events]….There are also other external day-to-day events that may influence public opinion. If it rains for five days straight, does that make respondents more pessimistic about whether things are headed in the right direction or off on the wrong track? What if your local sports team goes on a terrible losing streak or loses a big game in heart-breaking fashion?” [HuffPost]

THURSDAY'S ‘OUTLIERS' - Links to more news at the intersection of polling, politics and political data:

-An NBC/WSJ poll finds the majority of Americans worried about the debt ceiling (more results coming at 6:30 tonight). [NBC]

--7 percent of Americans say they have signed up for insurance though the Obamacare exchanges, three fourths reported encountering problems. [AP/HuffPost]

-A poll commissioned by Ted Cruz shows voters blame Republicans more than Obama and Democrats for the government shutdown. [Examiner]

-Nate Cohn points out that low approval ratings didn't stop Republicans from holding the House in 1998 and winning the presidency in 2000. [New Republic]

-Harry Enten thinks a likely McAuliffe win in Virginia should make Republicans "at least a little worried" about 2014. [Guardian]

CORRECTION: A previous version of this posted misstated which city the UMass Lowell mayoral poll surveyed.