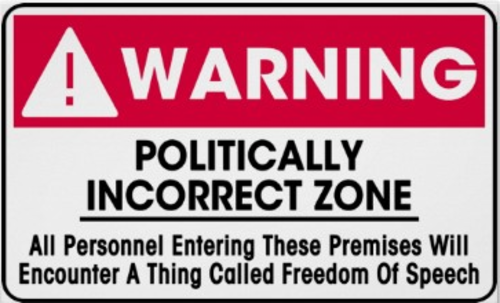 Ask a politician a blunt question, and chances are you'll never quite get a real answer. Say the truth loud and clear, and you'll probably become a pariah of sorts- unless you're Trump, that is. You see, our country is battling an intellectual illness termed political correctness; a social and political trend that Wilbur Smith deems "the worst form of censorship" because "you're not allowed to speak your mind unless you're...a minority people." It's a dangerous mask for apathy, a validation for the corruption and immorality in this upside down world. All in all, it hinders our growth as a nation and impedes the very foundations on which this country was built: freedom of speech, justice, and progressive change.

Ever since Kindergarten, we Americans are taught to cherish the Freedom of speech that our country provides; it is the very essence of the life, liberty, and pursuit of happiness that our founding fathers promised. What our country fails to understand, however, is that freedom of speech includes the right to offend other people, no matter their shape, race, accent, or office. If anyone knows anything about censorship and free speech, it's George Orwell, an author known for his shrewd political criticism. He shared with the world that "If liberty means anything at all, it means the right to tell people what they do not want to hear." After all, the third amendment in our nation's Bill of Rights reads plain and simply, "Congress shall make no law...abridging the freedom of speech," and no where does it make mention of any exceptions. If only society could foster an environment that truly appreciates this value in every sense of the word, our world would be a more honest place.

Like freedom of speech, justice is in the very ethos of our country. It's a value we Americans preach time and again­­; just take a stroll through our country's history and the history of the world at large: justice for women, justice for black people, justice for Christians, justice for Jews, justice for Veterans, justice for the LGBTs. As Martin Luther King Jr. so eloquently articulated in his 1965 speech to the people of Selma, Alabama:

This idea represents so much of what this fearless man stood for. Apathy is a dangerous habit, and history is its greatest testimony. We stand by as innocent Jewish blood is spilled in Israel each day; as children are stabbed on their way to school, parents shot in front of their very own children, and soldiers butchered while defending their country. We read the headlines about ISIS, but can't spare a minute to urge our elected officials to take action. If we continue to keep silent and don't raise our voice of conscience for those that can't, then who will? If the numbers six million and 1945 don't speak volumes, then I don't know what does. After all, we are our brothers' keepers.

At times, change must be sought for true justice to be realized. One need not attend an Alcoholics Anonymous meeting to feel the inspiration of the iconic Serenity prayer that originally appeared in a New York Herald Tribune obituary during the mid-1900s:

Change is like climbing a mountain- ever slowly and steadily, but progressively; the first step is awareness, the peak is courage and determination, and the rappel down is acceptance of the transformation. Politics aside (for a brief moment), President Obama's speechwriters had it right: "Change will not come if we wait for some other person or some other time. We are the ones we've been waiting for. We are the change that we seek." When push comes to shove, it is our duty as a nation to speak up when we recognize the need for change- even in the face of adversity; because if it works, don't change it, but if it doesn't­- we should've changed it yesterday. Four score and seven years ago (give or take), brave men rose to the occasion when they recognized the need for a free democracy in a sea of autocracy; let us follow in the footsteps of the American dream of life, liberty, and the pursuit of happiness and heed the call for action when change is needed.

We the people claim that we value the freedom of speech, justice, and progressive change on which our nation was established, so out with the sanitized sound bites and in with the truth. Some criticize Trump's sharp tongue; others can't get enough of him, but at the end of the day, George Orwell's profound wisdom in his 1946 essay "Politics and the English Language" rings true: "Political language... is designed to make lies sound truthful and murder respectable, and to give an appearance of solidity to pure wind." When we are too sensitive in our speech, we are acting insensitively to the men, women, and children who desperately need our help. As the leaders of tomorrow, let us take a stand by distinguishing between diplomacy and political correctness gone too far. Let's ensure that the pillars of our country's democracy don't crumble; let's make the folks on our coins and dollar bills proud.