Across the globe women's leadership and political participation are limited. Despite progress, women are underrepresented both as candidates and voters, as well as in prime political positions. The obstacles faced by women are evident, as the recently agreed Sustainable Development Goals include a focus on gender equality. Goal 5 states that women's representation in political and economic decision-making processes will fuel sustainable economies and benefit societies and humanity at large.

Women have proven abilities as agents of change and leaders in their communities on every continent. Women have a right to participate equally in democratic governance but impediments are routinely imposed. In 2015, the number of women parliamentarians across the world, rose only by 0.5 percent, according to an annual report by the Inter-Parliamentary Union.

Patriarchy, in particular, plays a huge role in the way women in politics are viewed; women have challenges in believing in themselves and behaving as leaders. The need to always follow subtle practices defined by patriarchy overtakes, and this is often bolstered by religious beliefs, which claim that women taking up leadership roles is against religious teachings. Women, who take leadership roles, are often regarded as aggressive as opposed to assertive. Yet, when they express their femininity, they are said to be weak and incapable of leading. These are all features of the subtle, and often not so subtle, ways in which patriarchy operates. 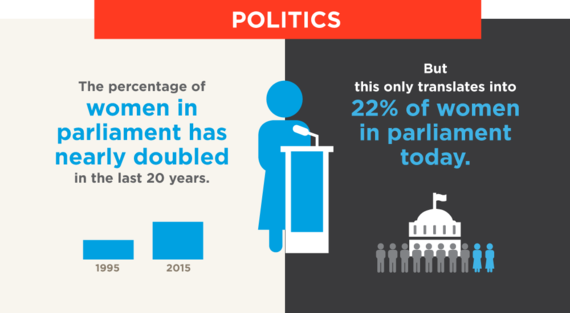 Women who aspire to take up leadership positions have competing demands impacting them constantly. Political participation challenges are also hindered by attitudes towards women fueled by double standards, lack of confidence, negotiation skills, and skills to navigate the formal complex political maze. Additionally, political processes, such as elections, are often violent in Africa, and not infrequently women become the easy targets in forms of political intimidation.

There are very few countries in the world with full gender parity in the political arena. Rwanda stands out as a case in point with 64 percent women parliamentarians, although these figures are viewed primarily as a result of the absence of men who perished in the genocide in the 1990s. Regardless of the circumstances, there is a reason to celebrate these women. Nonetheless, the lack of equal representation in politics worldwide is surprising looking at the human advancements over the years. Research shows that, with the current rate of progress in women's political leadership, women in the United States will not have an equal share of seats in Congress until 2121 because of the various issues raised above hindering women.

This is the reality in countries throughout the world, as illustrated by Hillary Clinton who recently told Time magazine:

"It's hard for anybody, but I do think that women bear that extra burden. And I think that the sexism is maybe less pronounced, less obvious but it still is prevalent in our political scene and in our culture and as a result people do say things and use language that have implicit biases about women in public life that demonstrate persistence sexism."

Ironically, in Zimbabwe, although regarded as a dictatorship, where violence and fear play a major role in politics, particularly during elections in addition to the other impediments, is actually doing better than the U.S. in terms of women's political participation (34 percent versus 19 percent).

It is important to have more women in politics and strive for parity because our priorities are different from men, and diversity is essential for progress. If more women take up politics, more attention would be given to social issues, such as health, education and housing. This is because women bring different concerns to government, especially as they have experienced lived reality of being in the home which is not taken seriously as work; interacting with children, the elderly and infirm. More women need to be encouraged to participate in politics as candidates, as voters and to vote for other women. A study in Zimbabwe, by the organization I run, showed that, as elsewhere in the world, women are interested in politics despite the challenges and their participation increases when they are coached individually by other women who understand the political processes.

The Research and Advocacy Unit study showed that, although electronic and print media campaigns, had an impact on stimulating women's desire to participate in politics, when women spoke to each other the impact was greater than the media effect. This is important particularly where women can experience other women participating in the wider political arena. The women showed a preference for women's organizations as the primary source of encouraging women to vote, but also felt that women's organizations should not be responsible for mobilizing women candidates. This dispels the notion that women are not interested in politics. More woman-to-woman campaigns are required, not only during campaign periods, but throughout the electoral cycle, as has been recommended by women's organizations, and feminist academics. Women supporting other women in politics works and should be properly organized and encouraged. The myth that women do not help other women is very strong particularly in environments that are still struggling with livelihood issues. However strong mentoring relationships spring out of real and often earned connection felt by both sides and this should be the case and owned by women.

Kuda Chitsike is Director of Research and Advocacy Unit (RAU), an independent, non-partisan, non-governmental organization with a mission to provide high-quality research on human rights and governance issues, particularly those pertaining to women and children as empirical evidence for advocacy to influence relevant and appropriate policy change. Kuda is a 2015 Eisenhower Fellow, a premier global network of leaders from all sectors working to better the world.