Anyone watching the Republican and Democratic presidential debates would be excused for thinking that there are indeed two different countries called "America," a Republican America and a Democratic America. The way "America" was presented and described by the Republican candidates bore little resemblance to the "America" of Democrats. Political polarization today means more than people simply strongly disagreeing on a particular issue such as being pro-life versus pro-choice. Americans from different political parties believe that there are very different challenges facing the country. 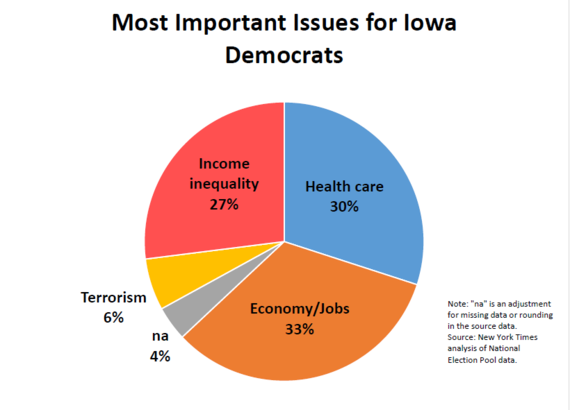 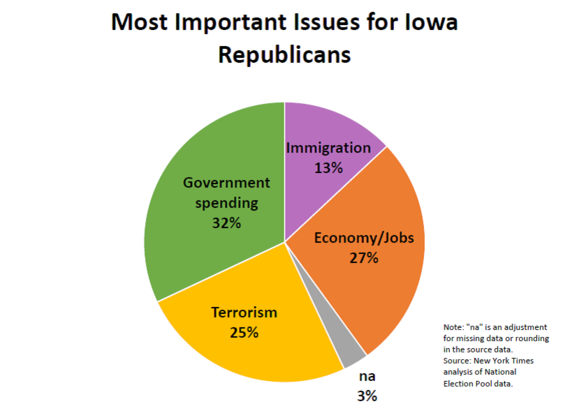 We can see the polarization in political priorities between Democrats and Republicans in the data provided by the New York Times on the issues that matter most to Iowa caucus voters. For about a third of Republicans, government spending is the most important issue, but this issue does not even register for Democrats. For almost a third of Democrats, health care is the most important issue, and it is not on the radar for Republicans. Income inequality is another big priority for Democrats, and it is not something that Republicans are thinking much about. About an eighth of Republicans are very worried about immigration, but this issue too does not register for Democrats.

In Red-State Iowa, government spending is out of control and the country is being overrun by immigrants. In Blue-State Iowa, health care is under threat and the rich are becoming richer while everyone else becomes poorer.

At first glance it seems that there are two priorities shared by Iowa Democrats and Republicans: terrorism and the economy/jobs. A quarter of Republicans see terrorism as the most important issue, but this amount is four times the share for Democrats. The fear of terrorism is a much bigger issue for Republicans.

Both groups share a somewhat similar level of concern about the economy/jobs. A third of Democrats prioritize this issue as do about a quarter of Republicans. But while somewhat similar shares of both groups see this issue as very important, the approaches to addressing them are likely to be very different. Democrats might want to help the economy by raising taxes on the rich and investing that revenue in infrastructure, and Republicans might want to cut taxes on the rich and loosen regulations.

This is the view from one dis-United State in America.

Algernon Austin is the author of America Is Not Post-Racial: Xenophobia, Islamophobia, Racism, and the 44th President which is the only book to analyze the 25 million Obama Haters in America.