Barack Obama is a Socialist who consorts with domestic terrorists. He is a Muslim who was born in Kenya and is therefore not constitutionally eligible to be president. He wants to import homosexuals, destroy the Second Amendment, and encourage abortions. According to Sean Hannity, he has thrown Israel under a "bus full of suicide bombers." According to Glenn Beck, he has "a deep-seated hatred for white people." According to Rush Limbaugh, he has "nothing but contempt for this country."

The tenor and tone of the right-wing assault on the President of the United States should disturb all Americans. It is, to say the least, unseemly. Of course, we cherish the right to free speech. But having the right to do something does not mean one should actually do it. The Nazis had a First Amendment right to march in Skokie and the Klan has a First Amendment right to burn a cross, but that doesn't mean we should join or applaud them. With rights come, or should come, maturity and personal responsibility.

Although the ugliness of our current political discourse is distressing, it is not unprecedented. In 1798, a critic of President John Adams fumed that under Adams' leadership, "every consideration of the public welfare" was being "swallowed up in a continual grasp for power, in an unbounded thirst for ridiculous pomp, foolish adulation, and selfish avarice." During the Civil War, Abraham Lincoln was variously attacked even in the North by those who opposed the war, the draft and the Emancipation Proclamation as a "despot," a "liar," a "monster," a "perjurer," an "ignoramus," and a "tyrant." And during the McCarthy era, the columnists Joseph and Stewart Alsop observed that "something has gone wrong, very wrong, in the capital of the United States," noting that a "miasma" of political accusation "is seeping in over the nation's capital, like some noxious effluvium from the marshy Potomac."

False, misleading and vitriolic attacks on our nation's leaders do not serve our democracy. But do they really have an effect? I was struck this morning by a recent report from the Gallup organization about how self-described Democrats, Independents and Republicans perceive the ideology of President Obama and the seven remaining candidates for the 2012 Republican presidential nomination.

In this poll, Gallup evaluated ideology on a scale from 1 to 5, with 1 being the most liberal and 5 being the most conservative. Not surprisingly, Republicans incline toward the higher number, Democrats toward the lower number, and Independents fall in-between. What was striking to me about the results of this poll was that for each of the Republican candidates, Democrats, Independents and Republicans all assessed the candidates' ideology very similarly. But as the following chart reveals, there is a dramatic gap in their respective assessments of President Obama's ideology. 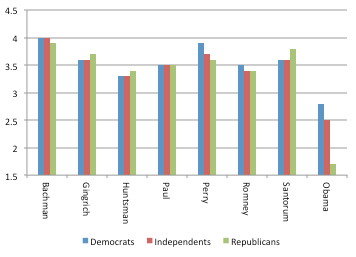 Although Democrats and Independents come to fairly similar conclusions in their evaluation of the President's political ideology, the Republicans are simply off-the-charts. If we assume, as seems sensible, that Independents have a reasonably neutral understanding of each candidate's ideology, then the data suggest that Republicans have a wildly distorted perception of the president's views.

This, I fear, may be one very troubling consequence of the aggressive and often nasty assault on truth and reason in our contemporary political discourse. The attacks, exaggerations and lies do, indeed, seem to have a significant impact on public opinion, especially among those who are already inclined to believe them.