From time to time, America's ruling class deigns to quiz its subjects about the relative importance of various issues. And actual Americans have been fairly resolute in rendering their opinions: Jobs and unemployment are the top priority for actual humans, while Beltway creatures maintain the idea that the deficit is the most pressing issue in America. That's not to say that the public doesn't harbor misgivings about the federal deficit, but those who do are nevertheless extremely leery about cuts to the programs they favor.

Which brings us to today's Politico/George Washington University "Battleground" poll, which is being presented to readers thusly:

That's a pretty neat trick there! Rather than explain what the poll actually revealed, Politico combines two manifestly different issues, presenting them as easily equatable matters. Of course, Congress is now dead set on a massive deficit debate -- today begins the long-promised process of holding hostages over the debt ceiling -- and this debate actually presents an opportunity cost to efforts that might help spur employment. Combining the two matters in this fashion is sort of like saying 98 percent of people either support or oppose abortion rights, right?

Says HuffPost Pollster editor Mark Blumenthal: "[That's] right. It's technically true that 48 percent opt for one of those two choices, but that's also an odd and misleading combination. You could also say that 52 percent choose economy & jobs, education, Medicare and Social Security and health care costs but only 22 percent choose either government spending and the deficit or taxes." [The extra 2 percent there comes from the 2 percent of respondents who assigned "taxes" as a priority. See internals, below.]

Indeed, the internals of the poll indicate that, once again, jobs are the top priority, with "the deficit" running in second place. 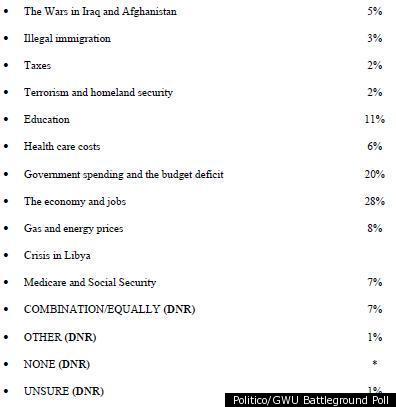 Frankly, the deficit-obsessed should take some satisfaction in the fact that the issue is important to one out of every five respondents. But combining the two crafts the illusion that deficits are much more important to voters than they actually are. The jobs numbers are essentially being used to lend more prominence to an issue that's not as important.

Despite the fact that this conflation of the two priorities would be a terrific talking point for the GOP, I note that the analysis offered by Republican Ed Goeas is, nevertheless, more sophisticated than Politico's:

Despite the historic military triumph in the days before this survey fielded, voters remained overwhelmingly focused on pocketbook issues like the economy and jobs (28%) and government spending and the budget deficit (20%).

Of course, the federal deficit is not, strictly speaking, a "pocketbook issue" (the household deficits incurred from lengthy unemployment fit that bill better), there is at least a tacit acknowledgement that two issues are actually distinct from one another.

At any rate, when we get to Sunday and you hear the people on the "hostage-taker" side of the debt ceiling debate talk about how 48 percent of Americans think curbing the deficit is their top priority, now you'll know how the actual opinions of the poll respondents got laundered.