Co-authored by Amanda Garza, an Art History and Archaeology student at Boston University and also a closet political junkie and sci-fi nerd.

While seeking his first seat in the Illinois General Assembly, Abraham Lincoln published a statement in the Sangamo Journal that in part divulged his motivations behind seeking elected office. Lincoln wrote, "Every man is said to have his peculiar ambition. Whether it be true or not, I can say, for one, that I have no other so great as that of being truly esteemed of my fellow-men, by rendering myself worthy of their esteem." Fast forward through 150 years of American politics and it is jarring to see how much and how little has changed. The Party of Lincoln, of Theodore Roosevelt and of Ronald Reagan is now the Party of Donald Trump.

Throughout his career Trump's "peculiar ambition" has been power and his public pursuit of it has garnered him esteem as a paragon of financial wisdom in the eyes of the public. He has branded hotels, beauty pageants and yes, steaks, with his name. This branding leaves the United States precariously close to becoming "Trumps AmericaTM". Trump's candidacy has become perhaps the greatest acid test of the integrity of the Republican Party and its members that the GOP has ever faced. All along the line, from the grassroots to the establishment, the breakwaters are failing. Trump deftly defeated his primary opponents by promising a segment of the electorate that feels disenfranchised renewed power by his proxy and the party the establishment is falling in line behind him. Despite the vow by the Republican wing of the #NeverTrump movement to not go quietly into the night, Trump has proven to be the Borg of the GOP: resistance is futile.

Previous Republicans who have vehemently condemned Trump - Carson, Christie, and Rubio - now fully endorse him. Trump, initially a political outsider, is now courting the Republican Party. Now the outsiders seem to be those still opposed to him. After he decried Trump as a "danger to democracy" who is "playing the American public for suckers" Newt Gingrich remarked about the previous Republican nominee Mitt Romney, "Having a guy like that go berserk in public makes you wonder what his problems are." Out of the political spotlight, Romney will likely weather such criticisms well but current elected Republicans face the prospect of being "Cantored" should Trump and his cronies lock down power over the party.

Meanwhile, the list of Republicans who have thrown their weight behind Trump (to varying degrees) is a curious laundry list of the entrenched old guard and the most power-hungry members of the Republican party. In contrast, those who continue to speak out against him or stay quiet are by and large those with no more political races left to run like Romney, the Bush family and Tom Delay. Curiously, many Republicans have been choosing to not "endorse" Trump but merely "support" him. While this may appear to be a ludicrous designation those who use it can be viewed as expressing their "support" of the will of the party while attempting to maintain distance from its controversial nominee.

Even more unusual are responses are those from party members like Cathy McMorris Rodgers, Washington representative and chair of the House Republican Caucus, who remained undecided for several weeks. By way of explanation, she commented on May 5 she would like to question Trump about his previous statements before passing judgment. On May 19 she publicly endorsed the GOP nominee. As Trump continues to soothe the fears of the hesitant party establishment by hiring mainstream staff members and whispering what have thus far been mere sweet-nothings into the jittery ears of the center right-wingers about dialing back his divisive rhetoric, the ranks of Republican holdouts against Trump will continue to shrink.

While the GOP establishment's backing of Trump may seem unconscionable, it is merely an extension of the consent the Republican electorate has given Trump to be their nominee. The leadership of the Party of Personal Responsibility appears to recognize that they have dug their own grave after 7 years of overblown criticism of all but the most extreme elements of the party, leaving an outsider like Trump strategically placed to exploit the anger that has resulted. The only way Republican non-supporters of Trump come out ahead after the election is if Trump loses badly in the general election and they can say "I told you so." If he wins, they risk being outsiders in their own party. Worse yet, if Trump loses narrowly to Clinton, or even long-shot Bernie Sanders, Trump non-supporters will more than likely be derided as traitors to their own party who may as well have voted with the Democrats.

The most vocal remaining "questioning" Republican, as of May 31st, is Speaker of the House Paul Ryan. His political calculus behind temporarily remaining on the fence about Trump is among the most complex. Ryan has consistently pushed for nuanced discourse among politicians about the issues facing America which provides among the sharpest contrasts against Trump's reductionist politics. In a recent video message Ryan declared, "Liberals and conservatives are going to disagree with one another on [how to help Americans succeed]. No problem, that's what this is all about. So let's have a battle of ideas, let's have a contest of whose ideas are better and why our ideas are better."

While Ryan and indeed no politician is always as pragmatic, by contrast, Trump is a true 21st-century candidate; his inflammatory rhetoric is pre-parsed into delectable sound-bites for the 24-hour news cycle that rarely even require 140 characters. In Trump's world the American economy can be distilled to a single word: "disaster"; Clinton is "crooked"; Ted Cruz is "lyin'" and the New York Times is "failing." Aside from urging Trump to invest in a thesaurus, Ryan is among the few Republicans with the political clout to push Trump to begin a more nuanced discussion of the issues facing America.

Ryan spoke out about not backing Trump as a presidential candidate on May 6. "I'm just not ready to do that at this point. I'm not there right now," he said in an interview with CNN. Media outlets breathlessly covered this. By tracking the 6,580 tweets on "Paul Ryan" and "Donald Trump" from May 6 to May 20 it becomes clear that speaking out against Trump sharply piques the media's interest. The herd mentality is present; as leading news networks such as CNN and NBC covered Ryan's speaking out against Trump, smaller news networks in the United States and foreign news networks jumped in. 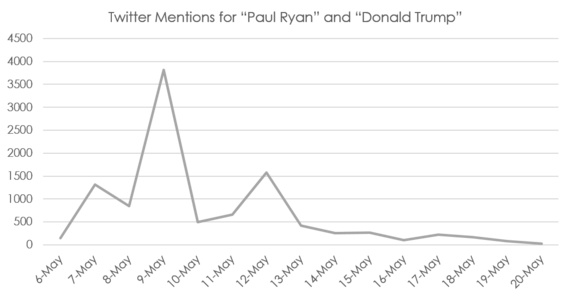 Mitt Romney has also spoken out against Trump. On March 3, Romney called Trump a "phony" in a speech. Immediately, Romney was thrust back into the spotlight after months of relative obscurity.
There is a immediate benefit to speaking out against Trump, or even simply speaking about Trump. By simply mentioning his name, one gets a share of the media coverage Trump has monopolized. Media consumers pay attention to Trump, and whomever is associated with Trump - like him or not, most people have some opinion on Trump's larger-than-life cartoon character. Lukewarm ex-candidates such as John Kasich do not incite passion. However, there is also a downside - Trump still receives most of the attention from attacking those who speak out against him. 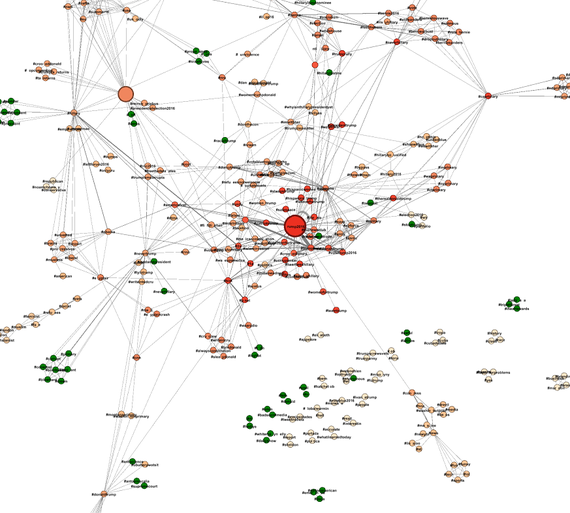 This network graph, modeled with open source data visualization software Gephi, shows the hashtags that are used across different communities on Twitter.

One would be remiss to romanticize any previous period of politics, including the one in which President Lincoln operated; our 16th President is renowned by historians for his shrewdness and political acumen, and even viewers of the recent Spielberg film Lincoln may recall the quip made by John Hawkes' character Robert Latham: "It's not illegal to bribe congressmen. They starve otherwise." However, Americans who have supposedly been pining for elected officials who aren't "bought and paid for" by special interests, while repeatedly re-electing officials who are, have finally come face to face with a candidate who is only accountable to his own ego and drive for power and has re-shaped the Republican Party in his own image. Despite this, he remains a dangerously unknown quantity American politics.

For everyday Americans and elected officials appalled at the prospect of choosing between Trump and Clinton, and already copping out of voting in the November election, these authors would argue that the choice at hand is deceptively simple: check one box for the devil you know or the other for the devil you don't. Regardless of who wins in November, it appears that little can be done to stop the barque of American politics from continuing to sail off the edge of the map.