Important Update: I mistakenly wrote that PolitiFact rated this as "mostly true" when their actual rating was "half true," so they were a bit more critical than I thought. MY BAD. Still, it should have been rated "mostly false."

As I've said before, I'm all for these fact checkers taking a close look at the claims of politicians and their proxies, particularly around election time. There's an ocean of misinformation out there, and we need skilled life guards if we are to avoid drowning in spin.

But it's unsettling when the fact checkers themselves get it wrong, as occurred in this PolitiFact review of the claim that median incomes rose $5,500 while Mitt Romney was governor of Massachusetts. PolitiFact grades this claim as half true, when it is mostly false.

Median income in the state rose, 2002-06, in nominal terms, i.e., before accounting for inflation. The review points this out, but downplays its significance, when in reality what matters to households is the real income trend, not the nominal one. That's what determines buying power and living standards.

And once you factor in inflation, as I do in the figure below, median income declines over these years in Massachusetts.

If your income goes up 5% and inflation goes up by the same amount, you're no better off in real terms, which is why economic statistics like this are always cited in real terms. Take GDP, for example. I just Googled "US GDP growth" and clicked through as many articles as I could stand. Not one cited nominal GDP growth. Same with the Census's own income reports -- and the news stories they generate -- on income growth. The headline is always the real, inflation-adjusted values.

There was legitimate analysis in the PolitiFact review about whether governors or presidents should get credit or blame for economic trends over their watch. And the nominal data are not "wrong." But they're clearly not what should be cited in this context. PolitiFact got themselves a bit spun on this one. 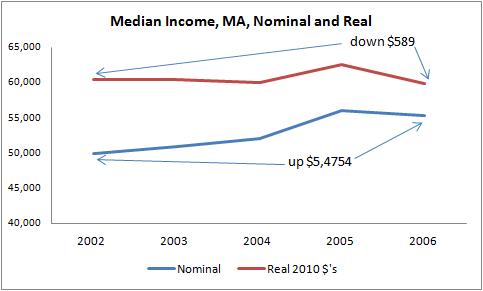