A majority of Americans have a favorable view of wealthy individuals and believe that they deserve their fortunes, according to a new poll.

GlobeScan, a market-research firm, released a 23-country study last week showing that 58 percent of U.S. citizens "strongly agree" or "somewhat agree" that the rich deserve their wealth -- a slight increase from a similar survey in 2008.

The findings come at a time when tax cuts for the rich, Mitt Romney's wealth and Occupy Wall Street have all been hot topics in the 2012 campaign cycle.

Growing economic inequality is a real phenomenon. Last year, for example, a study from the nonpartisan Congressional Budget Office showed that income distribution had tilted dramatically towards top earners between 1979 and 2007. Another study showed that the richest one percent has disproportionately benefited during the recovery.

The GlobeScan survey does not necessarily contradict previous polls that show Americans think income inequality is a real problem. Earlier this year, the president of the Pew Research Center wrote a New York Times op-ed that explained, "People [in the U.S.] don’t necessarily want to take money from the wealthy; they just want a better chance to get rich themselves."

The United States was one of only six countries surveyed where a majority thought the rich deserved their wealth. It ranked number three, with only Australia and Canada having more favorable views toward the rich. In Greece, just nine percent thought so. 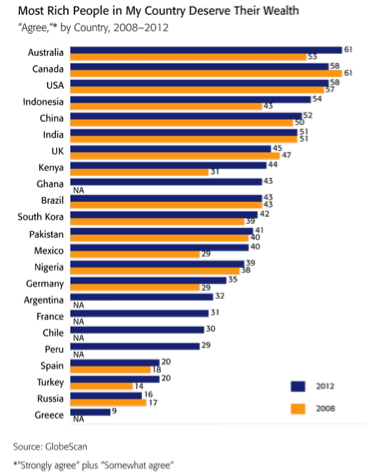