Surprise! The media still doesn't want to discuss climate change that much.

A new FAIR survey looking at top national news networks found that while reports of extreme weather dominated the media in 2013, networks failed to include hardly any mention of human influence. From January to September 2013, CBS Evening News, NBC Nightly News and ABC World News aired 450 segments consisting of 200 words or more, FAIR reported Wednesday. However, only 4 percent of those reports actually mentioned the words "climate change," "global warming" or "greenhouse gases."

Here is a graph of the results: 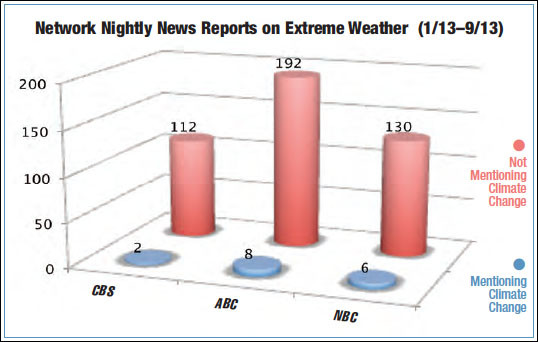 Climate change coverage in the media has long been scarce. Similar reports of the media neglecting talk of global warming occured in the days after Hurricane Sandy, when CNN and Fox News made little to no mention of "climate change" in their reports. Fox News has been criticized several times in the past for its denial of the human impact on weather, and a study in August revealed that the more time viewers spend consuming conservative news, the more likely they are to become skeptical of climate science.