The dreams of American parents for their sons and daughters are deep and vast, but they do not include a Beltway career, according to a poll from Gallup. Contacted between June 20 and June 24, the respondents, by a 64 percent to 31 percent margin, said, "Oh, hell, no!" when asked if they wanted their babies to grow up to be politicos: 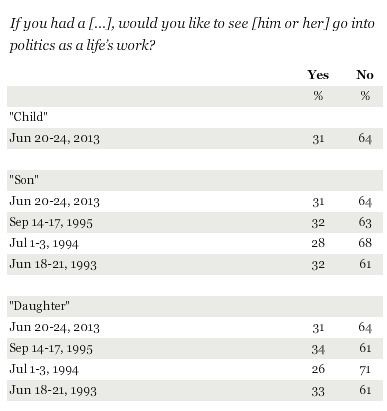 In general, Democrats and independents were slightly more inclined to see their children go into politics than Republicans were. Roughly one-third of Democrats and independents would like to see either their sons or their daughters enter politics. For Republicans, those numbers dropped slightly -- 28 percent would like to see their sons take up a political career, and 24 percent would like the same for daughters.

Non-white respondents were the most enthusiastic about seeing their kids sally forth to public office -- 42 percent wanted to see their sons in those careers, 45 percent said the same thing about their daughters. For the white respondents, these numbers were 26 percent and 25 percent, respectively.

Compared with other possible careers, politics ranks fairly low in Americans' pecking order. Another historical Gallup question has consistently found Americans mentioning a career in medicine or technology as the one they would advise a young man or woman to pursue. A career in politics or government has historically ranked well behind those professions as well as law, business, teaching, and engineering.

For all you know, you don't want most of these kids in politics either.

READ THE WHOLE THING:
In U.S., 64% Want Their Child to Avoid Career in Politics [Gallup]