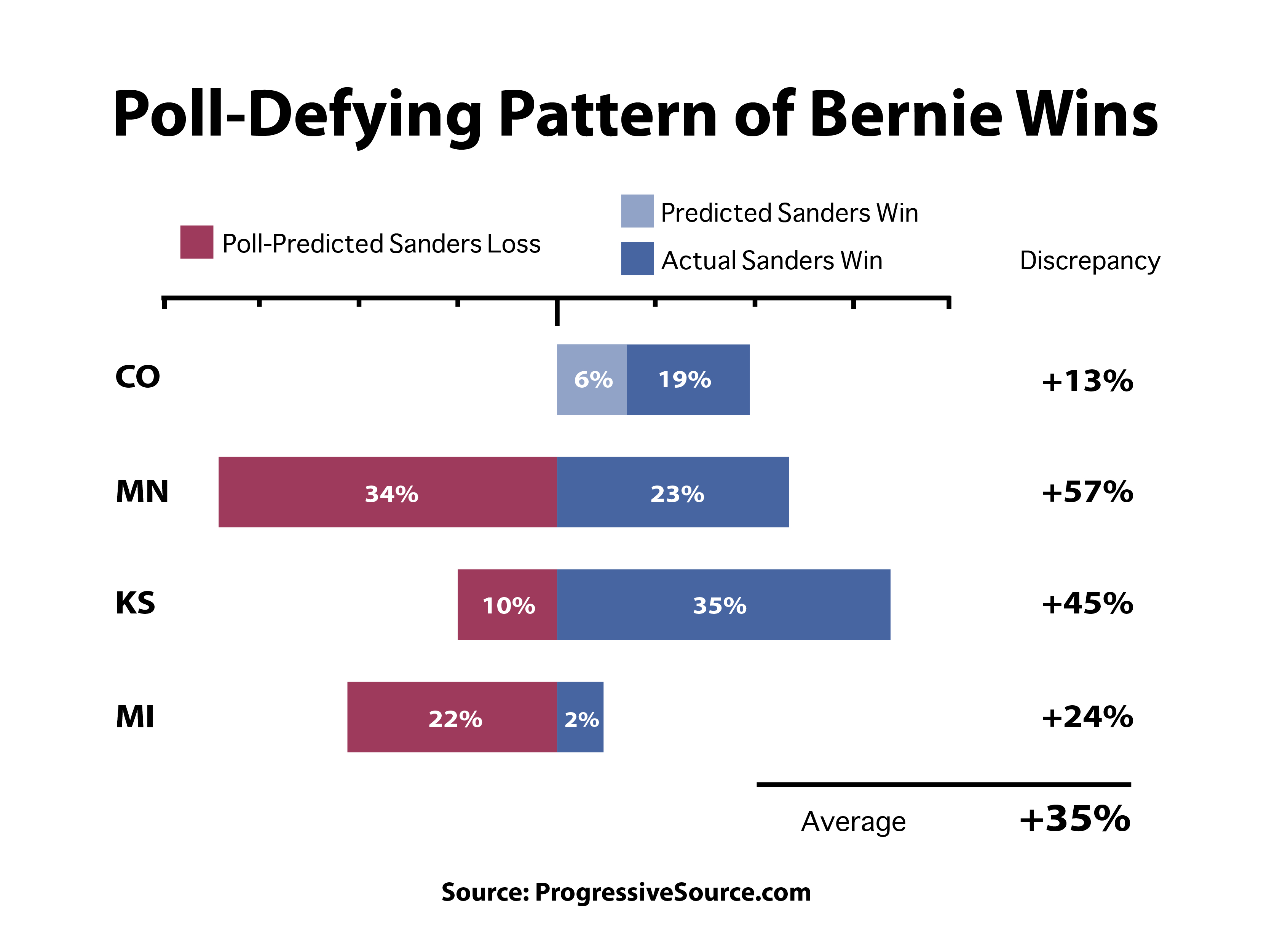 Bernie Sanders' historic upset in Tuesday night's Michigan Primary, which the nation's most influential polling aggregator estimated he would lose by 22 points, may prove to be the turning point in this election. That's because Sanders' two point victory in Michigan follows just a week or less after three other huge, but barely unnoticed poll-defying victories by Sanders in Colorado, Minnesota, and Kansas. Taken together with these other states, the Michigan upset is not, as America's foremost poll analyst Nate Silver claimed, a freak event not witnessed since the New Hampshire primary of 1984, but part of a new pattern of poll-defying results that will, if they continue, carry Bernie Sanders into the White House.

In the March 1st Super Tuesday contest, Sanders won Colorado by 19 points. The most recent poll there had shown him losing by 18% of the vote, adding up to a poll-to-reality discrepancy of 37 points.

The compelling question that eight days of election results in Michigan, Kansas, Colorado and Minnesota raises is how accurate are all the other recent polls showing Clinton victories on the March 15th Super Tuesday sequel? If Bernie surpasses the polls in these states by as much as he just did in Michigan, he stands to score historic upsets in the important delegate-rich states of Ohio and even North Carolina.

If Sanders does nearly as well as the 35 percent average poll-to-reality discrepancy of the four state pattern described above, Bernie may even win Illinois and Florida next week. Should that happen, it will be Bernie, not Hillary, who will have become "inevitable."

Why Aren't Voters Listening to the Polls?

The media drumbeat that Hillary Clinton has the election in the bag has been going on for months now. A few weeks ago, New York Times Washington correspondent Nate Cohn confirmed Hillary's coronation in a column titled, "Hillary Clinton and Inevitability: This Time Is Different." Cohn looked at the delegate count and compared Clinton's performance in 2008 with how she was doing this year, and concluded, "If a candidate has ever been inevitable -- for the nomination -- it is Mrs. Clinton today."

Media experts like Cohn point to an abundance of polls masquerading as news as the basis upon which they inform voters that Hillary Clinton will be winning the primary election. Poll results translate into conventional wisdom and until the startling Sanders upsets during the past few weeks, become a sort of self-fulfilling prophesy. The March 6 press release by the Mitchell/FOX 2 Detroit Poll, viewable in its entirely here, is a great example of how this was supposed to work in Michigan.

Detroit's widely watched Fox News commissioned Steve Mitchell, the region's top polling firm, to do more than a half dozen polls in the weeks leading up to the Michigan primary. The pollster's pre-election press release was headlined:

It continued, "In a poll conducted Sunday afternoon and evening before the start of their CNN debate in Flint, former Secretary of State Hillary Clinton has opened up a huge lead over Vermont U.S. Senator Bernie Sanders among Democratic Party Presidential Primary voters in Michigan. Clinton leads Sanders 66 percent-29 percent, up from 55 percent-37 percent on Thursday night. Only 6 percent of the voters remain undecided."

The poll, the press release explained, was scientific and accurate. Mitchell's press release provided pages of tables and informed reporters that, "A quadruple filter was used to determine that we were surveying only likely Democratic Party Primary voters." The poll "has a Margin of Error of + or - 4.5 percent at the 95 percent level of confidence."

To spoon feed deadline reporters conventional wisdom, Mitchell provided this explanatory quote: "Hillary Clinton (66 percent), fueled by strong support from women and African-Americans, has a tremendous lead over Bernie Sanders (29 percent), Clinton is seems poised to win convincingly in Michigan on Tuesday. She came into the state earlier than Sanders and she really made the Flint water crisis her issue, adding to her already strong support among African-Americans, who could make up a quarter of all voters." 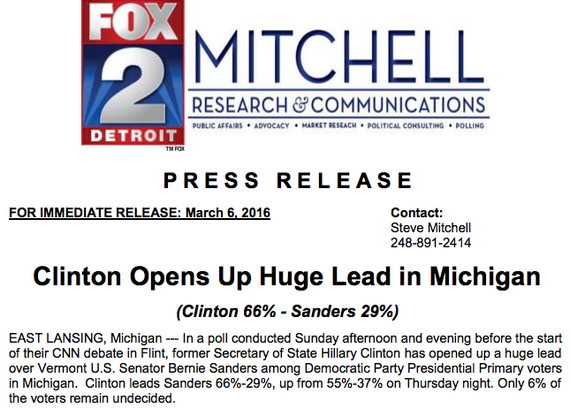 The message to be conveyed to readers, viewers and listeners the day before the big presidential election was clear: Pack it in, would-be Sanders voters. You're dreaming if you think your puny vote will make a difference! Might as well stay home.

But a funny thing happened in Michigan. Bernie voters didn't listen to the polls, or the pundits. They turned out anyway, as they did in Kansas, Minnesota, and Colorado. And during next week's big primaries, the purportedly scientific polls that today show a big Hillary sweep in every state are going to seem a lot less scientific.

Other Indicators That Bernie Will Win the Nomination

In addition to the poll-to-reality discrepancy pattern described above, another encouraging indicator for the Sanders campaign is that his largest victories seem to lie ahead, while Hillary's are nearly all behind her. As Seth Abramson observed in this excellent Huffington Post column titled, "5 Reasons the Clinton-Sanders Race Is Much, Much Closer Than You Think", after Clinton's big wins in very red Southern States, "In virtually every other state left to vote -- twenty-eight states, to be exact -- the demographics are substantially more favorable for Sanders than they were in even the "friendliest" state for him in the South (Virginia). Perhaps this is why he's leading in the most recent polls in Wisconsin, Utah, and Idaho... This may be why even the Clinton boosters on CNN are now saying that they're worried Clinton will lose Ohio, Illinois, and Missouri to Sanders next week. In other words, Hillary performed impressively only in the South, and in less than a week there will be no more South for her to mine for votes."

One more indicator that Bernie will be the Democratic nominee is the least known, even though it has the most successful predictive track record. American University's Kogod School of Business tracked every Presidential primary since 1968 to determine which state primaries for each party were most likely to predict the eventual winner in the nomination contest. In their extensive study, only one state was found to predict the Democratic nominee 100 percent of the time for every presidential election during the last 50 years.

That state was Kansas.

Bernie won Kansas on March 5, with a poll-defying 67.7 percent of the vote.