WASHINGTON -- With just one day remaining in the 2012 race for president, the polling picture is now virtually complete. President Barack Obama continues to hold narrow but significant leads over Republican presidential nominee Mitt Romney in enough battleground states to put him over the 270 electoral votes needed for victory.

The sheer volume of data tells us that Obama's leads in the tipping point states like Ohio and Nevada are not a matter of random chance, and there are no signs of any late breaks to Romney. If anything, the latest national polls appear to indicate a slight uptick in Obama's favor.

The only real remaining question is whether the the final polling averages will prove to be accurate or whether some systematic error in the swing state surveys is concealing a hidden Romney advantage that will reveal itself when all the votes are counted.

Before weighing those possibilities, consider the dozen or so new national polls released on Sunday. The results appear to be converging, as they often do in the final days of the campaign. A week ago, the margins separating the candidates varied between a 4-point Romney advantage and a 3-point Obama edge. Now the spread in the margins is narrower. Five of the polls show an exact tie, and seven give nominal advantages to Obama that are between 1 and 3 percentage points. The new surveys include the final national samples from the Pew Research Center, NBC/Wall Street Journal, CNN/ORC International and YouGov. 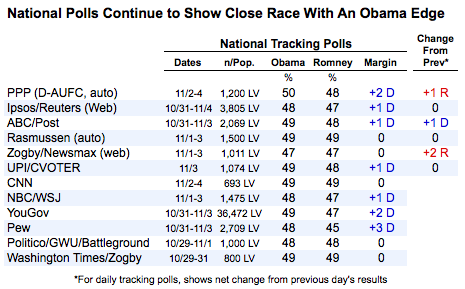 For much of the last three weeks, the national popular vote estimate produced by the HuffPost Pollster tracking model has been a near tie, with razor-thin margins favoring Romney by a half a percentage point or less. As of this writing, the national popular vote estimate now favors Obama by 1.1 percentage points (47.9 to 46.8), the largest Obama margin since before the first debate in early October.

Given 82 new national and statewide surveys entered over the weekend, including the massive new 36,472-interview YouGov national internet survey, the model now reports 91 percent confidence that the slim Obama national lead is real. When we factor in the potential for error observed in past national polling, however, the probability of an Obama lead in the national popular vote drops to 69 percent.

Ultimately, however, the race for president will be decided in the contests for Electoral College votes in the 50 states and the District of Columbia, and on that score Obama's advantages are holding.

Of the 10 new surveys released in Ohio since Friday, all but one show nominal, single-digit Obama leads, except for one automated Rasmussen Reports poll indicating a tie. The Pollster tracking model, as of this writing, gives Obama an Ohio lead of over 3 percentage points (49.1 to 45.7 percent). 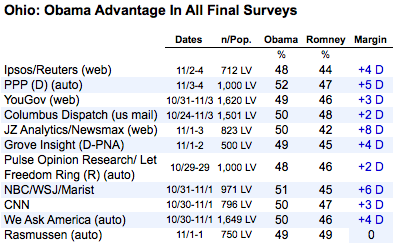 The weekend's new surveys narrowed Obama's margin slightly in Iowa. The most favorable result was a 5-point Obama lead over Romney (47 to 42 percent) on the Des Moines Register/Selzer & Company survey, but three others, including two polls from Democratic pollsters Public Policy Polling (PPP) and Mark Mellman, showed closer margins.

The Pollster estimate for Iowa's seven electoral votes now gives Obama a 2.8-percent lead over Romney (48.6 to 45.9 percent) as of this writing. The trend lines provide no indication that the margin separating Obama and Romney in Iowa is narrowing.

Obama's lead in Iowa combines with 3 to 4 percentage-point advantages in Wisconsin, Nevada and Ohio to give Obama an Electoral College lead. Victories in these four states plus the others where Obama leads by larger margins would net him 277 electoral votes, just seven more than needed for victory. 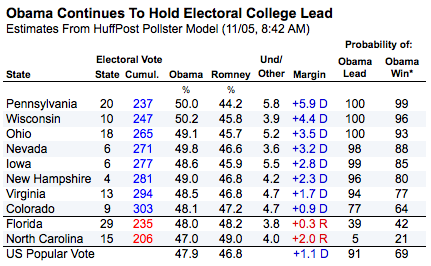 Given the large number of polls and interviews released in recent days, the model's statistical confidence that Obama leads in these states is relatively high (roughly 90 percent or better) but that assurance assumes accurate and statistically unbiased polling. When we factor in the historical potential for polling error, the probability of an Obama win falls below 80 percent in all three states.

The current estimate for Florida is very close, with Romney holding a tiny edge (48.2 to 48.0 percent), as of this writing. Romney's advantage is more significant in North Carolina, where he currently leads by 2 percentage points (49.0 to 47.0 percent).

When combined, these estimates add up to Obama winning 303 electoral votes to 235 for Romney. With the historical patterns of polling error factored in, the Pollster model currently gives Obama an 90 percent probability of winning the election.

So what are the arguments for a failure in the polling that could be concealing a Romney victory?

• A late trend in Romney's favor. No such pattern is apparent. If anything, the polling has shifted slightly in Obama's favor over the last few days.

• A last minute "break" of undecided voters against the incumbent. Such a shift occurred in 1996, when the final round of national polls understated support for Republican challenger Robert Dole while getting the percentages for President Bill Clinton and independent candidate Ross Perot exactly right. That pattern has not been in evidence in closer elections like 2012, however, and those who have closely examined the still undecided voters in recent days, including the Pew Research Center, Marist College and political scientists John Sides and Lynn Vavreck, see no looming "break" to Romney.

• Polls are heavily overstating Democratic early voters in battleground states. While pollsters do face a challenge in accurately incorporating the increasing number of early voters into their samples, and while some polls may overstate the early vote, most appear to be producing reasonable estimates of the early vote.

• Cell phone only voters. A third of U.S. adults now live in households without a landline phone, and the challenges of reaching "cell phone only" voters is the most likely source of potential error in the 2012 polls. If this issue is causing systematic problems in the polls, however, it will most likely work to Obama's favor.

More polls will be released later on Monday, including final national numbers from Gallup, whose daily tracking survey has been the most consistently favorable to Romney in October. But today's additional data will not resolve these questions. We will know whether the polls have been collectively accurate when the votes are counted.