A flurry of polls conducted last month found more Americans urging their political leadership to compromise to get things done. So are leaders who vote against the tax-and-benefit deal reached this month flauting public opinion?

Not necessarily. Dig deeper into poll questions on compromise and principle, and you'll find a more nuanced set of views. Republicans are currently far more resistant to political compromise than Democrats. Moreover, many embrace a formula for give-and-take that is really partisanship in disguise: Only the other side should compromise with my leaders.

Just after the November elections, five media pollsters asked questions about the relative merits of compromise versus principle. While three of four show more support for making a deal, their slightly different approaches yield some intriguing patterns.

For example, as reproduced below, the questions asked by the NBC News/Wall Street Journal poll, USA Today/Gallup, Economist/YouGov and the bi-partisan project of partisan outfits Democracy Corps (D) and Resurgent Republic (R) all found more Americans or voters expressing support for compromise rather than adherence to principle, though with some variation. 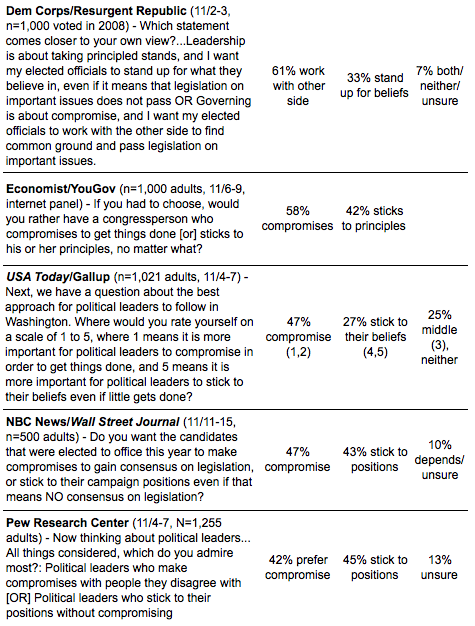 The NBC/Wall Street Journal poll produced a much narrower preference for compromise (47 percent to 43 percent) than the others, perhaps because they associated standing up for principle with sticking to "campaign positions." In other words, voters may be more reluctant to see their leaders compromise their beliefs when it means breaking a recent promise.

Meanwhile, the Pew Research Center survey took a different approach, asking voters about the kind of leaders they admire rather than their preferred approach to governing. Doing so, they found more Americans who admire leaders who "stick to their positions" (45 percent) than those who "make compromises" (42 percent).

So overall, we see a number of different attitudes at work and some in conflict: Americans are more apt to admire leaders who stand up for their beliefs, but more of us want them to compromise with each other to get things done (albeit less so if it means breaking a promise).

But that's just the aggregate. When we tabulate these results by party, we see far less enthusiasm for compromise among Republicans. All but the NBC/WSJ poll published results to these questions by party, and all three show the same pattern. On all four polls Republicans are less supportive of compromise. 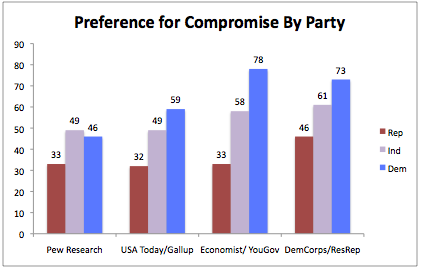 Even more interesting is what happens when pollsters asked about whether specific political leaders should compromise or stand up for their beliefs. Three pollsters took that approach in November, the aforementioned polls from Pew Research and Democracy Corps/Resurgent Republic plus a third from CBS News.

Consider first the questions pertaining to President Obama, reproduced below. Overall, large majorities of Americans, ranging from 62 to 78 percent, want the president to compromise and work with Republicans. The CBS News question -- which makes no reference to Republicans -- produces the strongest support for compromise. 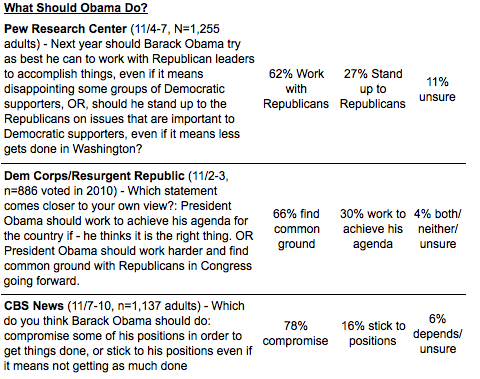 All three polls also asked the same questions about Republican leadership and found smaller majorities of Americans, ranging from 55 to 72 percent, urging Republicans to compromise with the president. Once again, the CBS question, which makes no explicit reference to Obama, produces the greatest support for compromise. 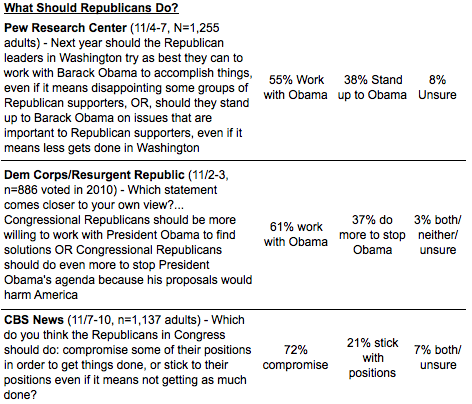 More interesting, however, is the pattern produced when tabulating these results by the partisanship of the respondent: For partisans, and especially for Republicans, "compromise" is something they want leaders on the other side to do. 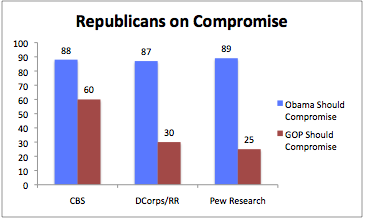 These numbers help explain the now well-known reluctance of incoming Republican House Speaker John Boehner to the embrace the word "compromise" in a Sixty Minutes interview last Sunday, despite having negotiated the most significant, bi-partisan deal of the last two years. He was trying to reconcile his actions with the overwhelming reluctance of his base to compromise with the president. 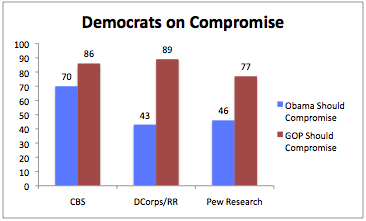 Finally, consider the same chart among independents. The results fall in between, but keep in mind that as tabulated here, most "independents" aren't truly independent. The majority lean to one party or another, so in all likelihood these results represent a blend of independent-leaning Democrat and independent-leaning Republican attitudes resembling those illustrated in the first two charts. 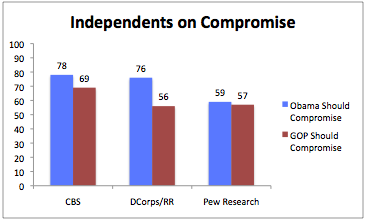 The primary message here? For many partisans, "compromise" is really a disguised expression of partisanship. They want to see the leaders of both parties working together, but mostly in support of their preferred policies. A larger number of Democrats -- a third to half -- are open to their leaders compromising with the Republicans, and that difference helps tilt the overall numbers in favor of compromise.

It would be interesting to analyze these questions at the individual level: How many voters consistently support the notion of compromise, urging both parties to compromise with the other? And who are they?