WASHINGTON -- A subtle difference in wording appears to explain drastic differences between two sets of polls that gauge whether the public would hold Republicans or Democrats responsible if the looming government shutdown does occur.

Two polls released this week by The Washington Post and the Pew Research Center (reported by HuffPost on Tuesday) show Americans essentially divided on who to blame should the federal government shut down over a budget impasse. But three surveys conducted in the last two months show Americans ready to hold Republicans responsible for an impending shutdown by double-digit margins.

The Pew Research and Washington Post polls ask Americans whom they think "would be more to blame" if the federal government shuts down as a result of a failure of the Republicans or the Obama administration to agree on a budget. They find roughly the same number ready to blame Obama or the Republicans on polls conducted this past week and in late February.

But, three different polls conducted over the same period by The Washington Post and ABC News, CNN/Opinion Research Corporation and Quinnipiac University ask a similar question with one key difference: The pools asks respondents whom they think would be "responsible" for a shutdown, rather than whom they would "blame." 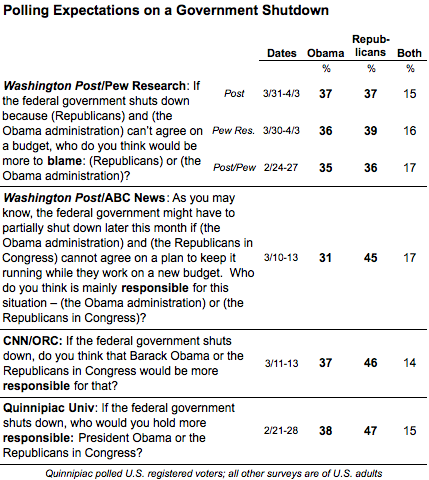 What is likely happening is that some respondents may hear different meanings in the words responsible and blame. Some may view the rise of the new Republican majority in the House of Representatives as "responsible" for pushing deeper budget cuts and thus creating the ongoing budget stalemate but may be more reluctant to assess "blame" for any potential breakdown in negotiations.

The Post/ABC poll, which shows Americans holding Republicans responsible by the widest margin (45 to 31 percent), asks the question in a different verb tense, emphasizing the present impasse rather than a potential future shutdown. They ask who "is mainly responsible" for the current lack of a budget agreement rather than who "would be more responsible" if the federal government shuts down.

These are relatively subtle differences in question language, and the differences they produce appear to occur mostly among Democrats and independents. The gap in the percentage who hold Republicans "responsible" rather than to "blame" on Post/Pew and Post/ABC questions shows up mostly among Democrats and independents, as seen in the following chart (based on data shared by The Washington Post's Jon Cohen). Very few Republicans are ready to hold the Republican leadership accountable regardless of the question wording. 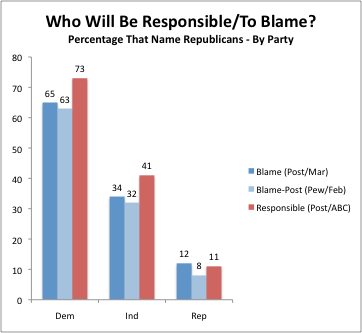 As a general rule, when small, subtle changes in wording produce strange or unexpected differences, the culprit is usually fleeting reactions that are not grounded in strongly held opinions -- what pollsters call "non-attitudes." In this case, the difference made by changing "responsible" to "blame" probably tells us that it is simply too soon to anticipate how Americans will react to a government shut down, should it occur.

What we can see more clearly, however, is that large majorities of Americans want President Obama and the Republicans to reach a compromise and avert a shutdown. Four different surveys released in the last two months shows majorities ranging from 55 to 81 percent expressing a preference for compromise rather than a hard line leading to a government shutdown. 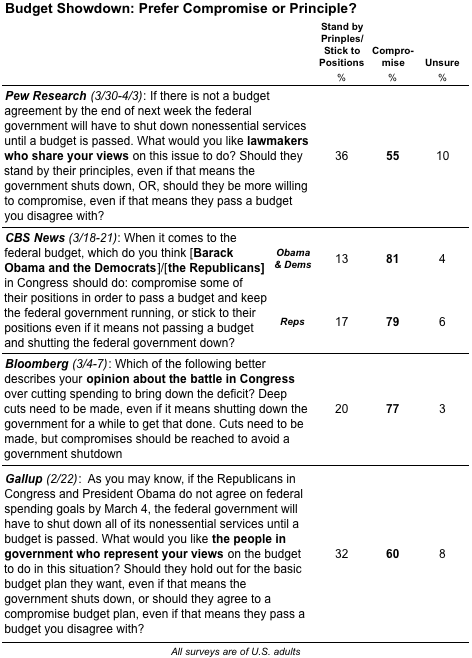 The variation in the compromise vs. stick-to-principles questions likely results from the tendency of partisans (especially Republicans in the current environment) to be more eager for compromise by the other side than by leaders of their own party. That's why the Pew Research question, which asks everyone about what they want "lawmakers who share your views" to do, produces the smallest number favoring a budget compromise (55 percent compared to just 36 percent who want their side to "stand up for their principles").

That contrast helps explain why the Republican leadership appears to be taking a harder line in budget negotiations, a position that may ultimately alter judgements about who will be to blame if a government shut down occurs.

- - - - -
Note: The box below displays a new tool that The Huffington Post is testing to ask poll questions online. We encourage you to give it a try, but please note that any results displayed are not a "scientific" random sample and are for your entertainment only.