WASHINGTON -- Five new national polls released on Monday or Tuesday all confirm that former Pennsylvania Sen. Rick Santorum has gained significant support in the wake of his victories in last week's caucuses and primaries and now runs roughly even with former Massachusetts Gov. Mitt Romney among Republicans nationwide.

The latest national surveys add up to a consistent snapshot of the Republican race. When asked who they prefer as a nominee, Republicans divide almost evenly between Santorum and Romney, with Rep. Ron Paul (R-Texas) and former House Speaker Newt Gingrich (R-Ga.) running far behind.

Three of the new surveys, from CNN/ORC International, CBS News/New York Times, the and Pew Research Center, all show Santorum ahead of Romney by margins of 2 to 3 percentage points. The latest Gallup Daily tracking poll shows Romney leading by 2 points and a new Fairleigh Dickinson University survey shows both candidates running even.

Random sampling error accounts for much of the minor variation between the surveys. Since the nomination is decided by a series of statewide primaries and caucuses rather than a national primary, the critical finding is not the precise level of support for each candidate but that the Republican race has taken yet another dramatic turn.

As illustrated by the HuffPost Pollster chart below, based on all national polls on the Republican nomination, Santorum's support has nearly doubled in the last two weeks (to 31.4 percent) putting him into a near tie with Romney (31.1 percent) followed by Gingrich (14.5 percent) and Paul (12.1 percent). 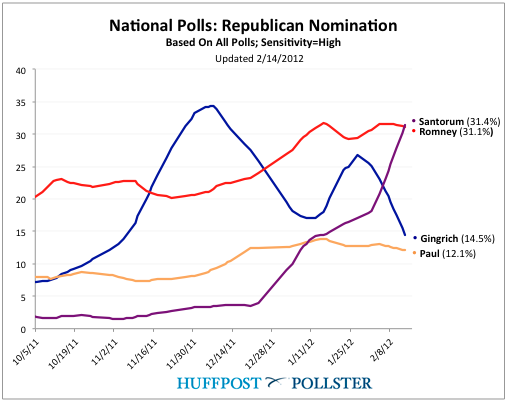 The question everyone is asking is whether the current snapshot will persist or whether Santorum, like a series of conservative "not-Romney" alternatives before him, will soon fade. The polling volatility is likely to continue, since the latest results confirm that Republicans have not yet come to a consensus on their preferred nominee.

In recent Republican and Democratic contests, January proved to be the decisive month in which opinion shifted in a way that either crowned the presumptive nominee -- as with Sen. John McCain (R-Ariz.) in 2008 and Sen. John Kerry (D-Mass.) in 2004 -- or shifted to an alignment that remained mostly intact through the remaining primaries (as with President Barack Obama and Secretary of State Hillary Clinton in 2008).

Not this time. Instead, as explained in a Gallup analysis published on Monday, Republicans have responded to five of the first six primary or caucus nights by "jumping on the winner's bandwagon" and producing an immediate gain in the national polls. As shown in the table below, Romney, Gingrich and Santorum have all experienced increases in support on the Gallup Daily tracking ranging from 6 to 14 percentage points after victories. 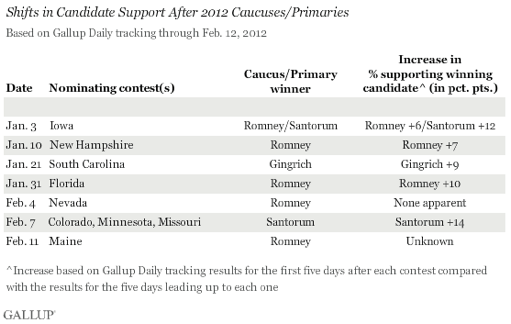 The fact that many of these shifts quickly faded suggests that national polls on the Republican race will continue to show the volatility they have demonstrated all along. The conservative Republicans that have been shifting from candidate to candidate remain skeptical of Romney's conservative bonafides, and surveys continue to produce evidence of great voter uncertainty. On the new CBS/New York Times poll, for example, 60 percent of Republican primary voters nationwide say they could still change their minds about which candidate to support.

So at very least, the national polls are likely to shift again based on the outcome of the next set of primaries in Michigan and Arizona on Feb. 28.

No, January was not the month that national polling became more stable, as it did in nomination contests waged over the last decade. Instead, the better model for this year may be the Democratic contest of 1988. In that year, the eventual nominee, Massachusetts Gov. Michael Dukakis (D), finished third in Iowa and then won in New Hampshire, but his victory got lost in coverage of the Republican race and the battle among the other Democratic candidates.

Polls in late 1987 and early 1988 showed no dominant front-runner, and support for Dukakis mostly varied between 10 to 15 percent of Democrats nationwide. His support increased after the New Hampshire primary to 25 percent on a CBS/New York Times survey, putting him roughly 10 percentage points higher than the other Democratic candidates. 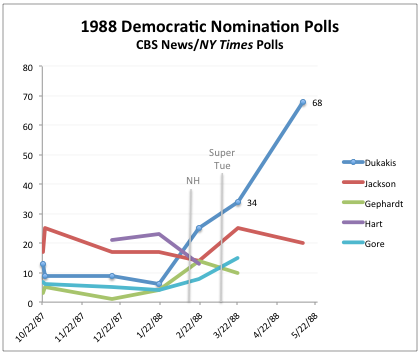 But Dukakis failed to win a decisive victory in the Super Tuesday primaries on March 8, 1988. The results that day were something of a wash, with Dukakis, the Rev. Jesse Jackson and Tennessee Sen. Al Gore all winning multiple states. The field narrowed, but another CBS/New York Times poll conducted two weeks later gave Dukakis only a nine-point lead (34 to 25 percent) over Jackson.

It was not until the contest narrowed to just two candidates in April that national polling shifted decisively in Dukakis' favor. A final CBS/New York Times News survey in May found Dukakis with a 68 to 20 percent lead over Jackson.

Although the national polls currently show a close race, Romney's campaign is well organized and flush with cash and thus able to compete for delegates in every state. For now, Santorum's campaign must focus more narrowly on the upcoming primaries. Moreover, the majority of Republicans continue to believe that Romney will win. On the CNN/ORC International poll, for example, more than two thirds of Republicans (68 percent) now say they expect Romney to win the Republican nomination, up from 41 percent in December.

CORRECTION: This article has been updated to remove references to a new Rasmussen Reports poll from Michigan inadvertently included among the new national surveys.