WASHINGTON -- This afternoon, the U.S. House of Representative will vote on the Republican budget plan proposed by Rep. Paul Ryan (R-Wis.) that would transform the Medicare program into a system that would provide seniors with vouchers for private health plans rather than direct payment for their medical bills. But if Americans conclude that it "ends Medicare as we know it," as President Obama argued earlier this week, the proposal will likely face public resistance. Though Americans know little of Ryan's plan, large majorities oppose cuts in Medicare and see little need for a major overhaul.

While pollsters ask about potential changes to Medicare in various ways, their most straightforward questions are about potential budget cuts. The table below features responses to three questions asked about the popular program in recent months. The national surveys show majorities, ranging between 54 and 76 percent of adults, reject the notion of cuts to Medicare: 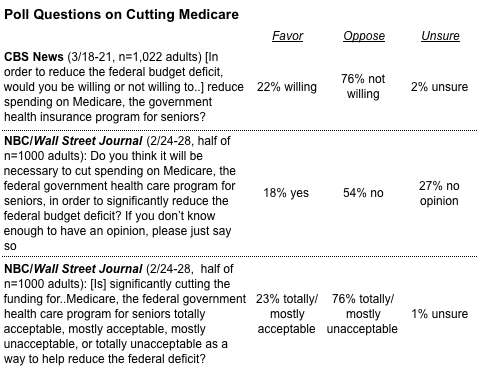 The same CBS News and NBC/Wall Street Journal polls as well as another from USA Today/Gallup also asked more broadly about the need for "changes" in the Medicare program. These results show a willingness to make changes but little enthusiasm for a "complete overhaul." Specifically:

So the very significant changes to the Medicare program proposed by the Ryan budget will confront a public skeptical of the need for cuts in Medicare or a complete overhaul of the program. That's quite a difference from what President Obama and the Democrats faced in regard to the need for reform of the health care system. Then, as NBC's Mark Murray notes, "a whopping 70 percent said the health system needed 'major reform' or 'complete overhaul.'"

However, these general attitudes do not tell us how voters are reacting to the specifics of Ryan's proposal. The best measure of that comes from the afforementioned NBC/Wall Street Journal poll, which asked about "a proposal to change how Medicare would work so seniors being enrolled in the program ten years from now would be given a guaranteed payment called a voucher from the federal government to purchase a Medicare approved coverage plan from a private health insurance company."

They found those with an opinion split -- 21 percent say the proposal as described is a good idea, 22 percent say it is a bad idea, but a much larger majority (57 percent) who say they do not "know enough about this to have an opinion at this time."

This last result is critical. The vast majority of Americans know little about how Ryan's budget affects Medicare, so polling questions that go on to describe that in more detail are likely to produce fleeing reactions that have more to do with the wording of the questions rather than actual, previously-held opinions about the Republican budget.

Here are a few examples that, not surprisingly, show a huge range of variation:

A previous NBC/Wall Street Journal poll from February asked about "gradually turning Medicare from a system in which the government pays for most beneficiaries’ medical bills into a program in which seniors would receive government-issued vouchers in order to purchase private health insurance." They found slightly more who consider such changes unacceptable (48 percent) than those who found it acceptable (43 percent).

But in their March poll mentioned above, they present arguments from supporters and opponents of a plan to change Medicare into a voucher program starting in ten years:

Which of the following statements do you agree with more?

OPPONENTS of this proposal say the current Medicare system provides health insurance to seniors with much lower administrative costs and this proposal will result in less coverage and more out of pocket costs for seniors.

This question produces the opposite result. Nearly half (48 percent) say they agree with the supporters and just slightly better than a third (35 percent) agree with opponent.

Now consider two questions asked on a survey released this morning by the Democratic Party-affiliated Democracy Corps project. They first asked about "a budget for the next 10 years," proposed "this week [by] Republicans in the House of Representatives…that they say will cut 6.2 trillion dollars from the federal budget." When described that way, with no mention of any change to Medicare, the Democratic poll finds 48 percent in favor of the Republican budget and 33 percent opposed.

But they then provide a five-sentence description of the Republican budget plan:

The plan cuts 6.2 trillion dollars below the president's budget and reduces the debt as a percentage of the economy. It makes small cuts in defense spending. It cuts spending for domestic programs in the coming year by 72 billion dollars, almost 20 percent, and freezes it for five years. It repeals the new health care bill and the new Wall Street reform law, makes major cuts of almost 800 billion dollars to Medicaid and Medicare for seniors over the next ten years. Starting in 2022, new retirees will no longer get health coverage through Medicare, but instead will get a voucher that will partially pay for insurance they purchase from private health insurance companies. The proposal cuts taxes for corporations and people making over 370 thousand dollars a year.

This description produces a large shift: Just 36 percent now favor the plan and 56 percent oppose it.

We saw something similar during the health care debate on questions that tried to explain the specifics of the public option. If there's a lesson from that experience it is that these more descriptive questions are the least important measures of what Americans actually know of any ongoing legislative debate. It is the real, fundamental attitudes that matter most. And when it comes to a potential Medicare "overhaul," the overwhelming majority of Americans are skeptical.