WASHINGTON -- A prominent Democratic pollster has a blunt warning for the Party: Despite a turn in economic growth and job creation statistics, Americans perceive no change in a "real economy" of reduced wages and benefits.

On Thursday, Democratic pollster Stanley Greenberg briefed reporters on results from a recent series of focus groups, one-on-one interviews and a national survey of likely voters all sponsored by Democracy Corps, the organization Greenberg founded with campaign consultant James Carville.

The results show that backward-looking campaign messages about who is to blame for the recession or whether the recovery efforts are succeeding are doomed to failure. Instead Greenberg is urging Democrats to look forward, embrace the ongoing economic hardship and propose solutions that target perceived greed and unfairness.

Not surprisingly, given his affiliation, Greenberg highlighted some hopeful news for Democrats. Although voters rank government spending and deficits among the top problems they want addressed, the new survey finds a six-point decline in confidence in Republicans since April on having "the right approach spending and deficits." Voters chose Republicans over Democrats on that measure by a 16-point margin in April (51 percent to 35 percent), but by only nine points in May (44 percent to 35 percent). 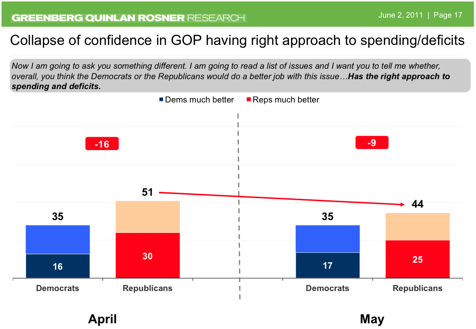 The newly released Democracy Corps report explains that Republican budget and Medicare proposals helped cause this change as well as a sharply diminished Republican advantage on the economy. "Voters never wanted austerity," Greenberg and his colleagues write, "and attacking Medicare cut right to the heart of middle class financial security."

Greenberg was less sanguine about perceptions of the economy. "There is a real economy out there," he warns, an economy "that's not changing." Despite the creation of 244,000 new jobs in April, 23 percent voters believe the economy is still "at the bottom" and not improving, and 31 percent think it "has not yet bottomed out and will still get worse." Just 42 percent of voters believe "the economy has already bottomed out and is starting to improve."

Moreover, on a question tracked since 2008, two thirds of the voters surveyed by Democracy Corps continue to rate the state of the economy as "cold" rather than "warm."

What's the problem? Across a series of surveys, between 37 and 40 percent of Americans report experiencing reduced wages or benefits in the last year, between 35 and 41 percent have reported losing a job, 22 to 27 percent report having lost their health insurance and 13 to 22 percent report having fallen behind on their mortgages. As the Democracy Report chart shows, these numberrs have shown no sign of sustained improvement since early 2010. 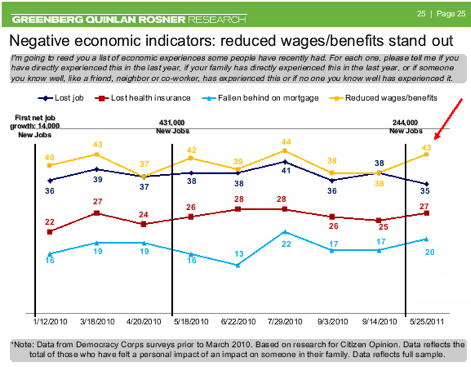 These perceptions are based on "real experiences," Greenberg said.

Against this backdrop, Greenberg warns the Obama administration and Democrats that "the past is a trap." Political messages about who was more responsible for the financial crash or about the merits of the recovery effort, "tested dismally" in the survey.

Instead, Greenberg argues for Democratic messages that fully embrace the new economic reality. The messages that tested better in his survey: reject both "credit-taking" and the "blame game," concede that "immense economic problems will take years to solve" and emphasize economic and budget solutions that "ask the richest to pay their fair share of taxes," support "education and innovation" and "confront the power of money and the lobbyists."