A new Pew Research poll confirms a strong continuing trend in favor of same sex marriage. Obama's internal polling analytics beat the polling averages. And the CBS/Times poll shuts down its in-house call center. This is the HuffPost Pollster update for Thursday, June 6, 2013.

MAJORITY OF AMERICANS THINK GAY MARRIAGE IS ‘INEVITABLE’ - HuffPost: “Gay marriage remains a divisive issue, but the majority of both supporters and opponents now agree it's here to stay. Polling released Thursday by Pew Research finds that 72 percent of Americans say that recognition of same-sex marriage is "inevitable," up from 59 percent in 2004. Today, 59 percent of those who oppose legalizing gay marriage believe it nonetheless will happen, and 85 percent who support legalization think it will happen.” [HuffPost] 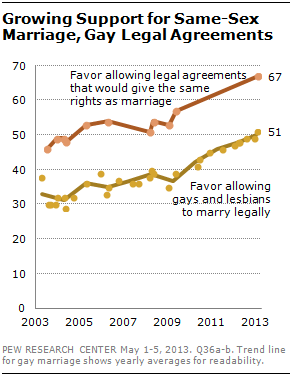 Republican pollster Alex Lundry: "These Pew numbers are absolutely STUNNING. This is the most profound public opinion shift in modern political history." [@AlexLundry]

OBAMA'S ANALYTICS OUTPERFORMED...US - Bloomberg Businessweek's Josh Green persuaded the Obama campaign to share a bit more information about the performance of their internal tracking, including an assessment of how their internal horse-race tracking stacked up against the polling aggregators: "The Obama folks make two big claims: that they were more accurate—and more accurate earlier in the race—than their competitors. To back this up, they agreed to share, for the first time, the results of their own nightly forecasting model, code-named 'Golden,' that was based on 62,000 simulations of the November election and distributed each day at 2 p.m. to David Axelrod, Jim Messina, and the rest of the campaign’s brain trust." Green also obtained an analysis showing how the Obama "Analytics forecast" outperformed the polling averages produced by Pollster, FiveThirtyEight, RealClearPolitics and TalkingPointsMemo.” [Businessweek] 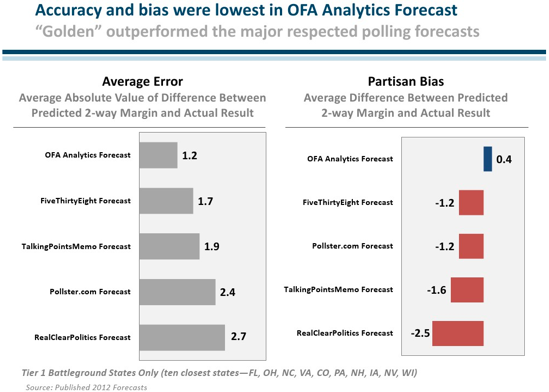 CBS/TIMES: POLITICS DROVE IRS TARGETING - CBS News: "Most Americans regardless of party believe political reasons drove the Internal Revenue Service to single out for burdensome and unnecessary scrutiny some conservative groups applying for tax-exempt status, according to a CBS News/New York Times poll out Thursday. The public splits across party lines, though, about whether President Obama and his administration were involved. Sixty-eight percent of respondents- 80 percent of Republicans, 60 percent of Democrats and 66 percent of independents - said they think the IRS targeting was motivated by politics, rather than adherence to the tax code policy. But while forty-four percent think the Obama administration had a hand in the targeting, 40 percent said they believe the agency acted on its own." [CBS]

CBS shuts down call center - The methodology blurb at the end of the CBS report included an easily overlooked change that marks the end of an era in news media polling: "Data collection was conducted on behalf of CBS News/The New York Times by Social Science Research Solutions of Media, PA." Previously, interviewing for CBS News polls, including those conducted in recent years in partnership with the Times, had been fielded at a Manhattan based call center owned and operated by the television network. But industry sources confirm that the CBS has opted to shutter its in-house call center. Both the CBS and Times/CBS polls will continue as before, but with telephone interviewing conducted by outside firm SSRS. Most news media polls now subcontract interviewing to outside firms. The CBS/Times partnership was the last major media polling operation to use an in-house call center.

Marjorie Connelly remembers - Connelly, a polling editor at the New York Times, via email: "I got started in this business as an interviewer for the Times/CBS News polls when I was in college. At that time, the interviewing was still being done at The New York Times building on West 43rd Street in the advertising department – a large room with desks, telephones and a staff that cleared out by 5:00 pm and didn’t work weekends. Desks for daytime interviewing were located throughout the newsroom – we used the desks of reporters on vacation or out on assignment. It worked that way while it was still being done by pencil and paper – from 1975 to 1991. The introduction of CATI interviewing necessitated the relocation of the interviewing operation to CBS offices on West 57th Street. For many years, there has been a dedicated survey room in the Broadcast Center."

CAN GALLUP BOUNCE BACK? - The New Republic's Nate Cohn: "The most important Gallup news might not have been any innovative finding from the report, but a continued commitment to transparency. Gallup deserves considerable credit for releasing their raw data through the Roper Center for Public Opinion archives, which allowed Blumenthal to diagnose Gallup’s failings early on. Blumenthal and Ariel Edwards-Levy reported Tuesday that Gallup would make the raw data from their experiments and future surveys available through the Roper Center, which will allow analysts to confirm that their changes have yielded improvements...The survey is extremely well-funded and has huge samples, especially over a multi-week period. They’ve brought in a highly regarded team of survey methodologists, and their commitment to transparency means that analysts should ultimately be able to confirm that their efforts have paid dividends. It just might be enough to restore confidence in America’s oldest polling firm." [TNR]

Or time for alternative methods? - The Guardian's Harry Enten: "I'd look to other sources in preference to a survey that interviews some number of respondents in one survey, a different set of respondents in the next survey, and so on. One of the biggest takeaways from the American Association for Public Opinion Research (AAPOR) conference is on the usefulness of panel research. That is, you have a set number of respondents, weighted to the correct population parameters, who get interviewed over and over again. This leads to less volatility, and you can actually see how different respondents are reacting to the campaign." [Guardian]

GOP FEMALE OFFICE-SEEKERS FACE A TOUGH ROAD - Christine Matthews and Kristen Folkerts: “A majority (58%) of Americans would like to see men and women represented equally in the U.S. Congress, according to a new HuffPost/YouGov poll. Despite efforts like Rutgers University CAWP 2012 Project "20% in 2012" campaign, women still account for only 18% of Congress. While many would like to see women members of Congress at parity with men, many challenges remain to getting them even close. For Republican women, the challenges are even steeper....Republican men were far more likely than anyone else to think Congress should be mostly men. They also thought that women's interests were already fairly represented in Congress...so why bother electing women?” [HuffPost]

POLLSTER UPDATE VIA EMAIL! - With a few technical glitches now out of the way, you can receive this daily update via email. Just enter your email address in the box on the upper right corner of this page, and click "sign up." That's all there is to it (and you can unsubscribe anytime). The Pollster Updates will continue to publish online, but if you'd prefer the convenience of email, it's just one click away.

-Americans are feeling more optimistic about the economy, but most see no job growth. [YouGov]

-Brendan Nyhan warns journalists about making too much out of one poll. [CJR]

-Joe Twyman, the director of YouGov’s Baghdad office, tells the story of conducting the first survey in Iraq after the fall of Saddam. [BBC]