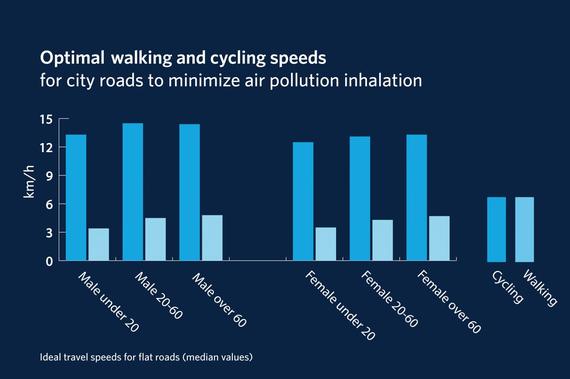 Walking and cycling are good exercise, but in urban settings, increasing your breathing rate can mean inhaling more polluted air. In a new study, Alex Bigazzi of the University of British Columbia has pinpointed optimal walking and cycling speeds to minimize exposure to air pollutants. We asked him about his research and findings.

ResearchGate: What led you to research this?

Alex Bigazzi: I've been doing research on traffic-related air pollution and travelers' exposure for a while, mostly focused on mitigation strategies for transportation engineers and planners. In communicating those results to the public, many people expressed interest in what they could do on their own to reduce their personal air pollution risks when they walk or bicycle in cities. This led to my recent research on the pollution-related impacts of route and speed choices. And, as a daily bicyclist, I'd personally wondered how my speed impacts my pollution inhalation.

RG: Different cities have different levels of pollution. Does it matter which city the pedestrian or cyclist is in?

Bigazzi: Absolutely, the city makes a big difference, and where you are within a city makes a big difference too. We know that on-road pollution concentrations can vary greatly over distances of a single block, so route choices are important for pollution risk. But in this research, I was just looking at how speed choice impacts pollution inhalation. The results are independent of the concentration in the air. The analysis essentially shows how speed and breathing rate combine to amplify pollution risk by influencing the total volume of air inhaled over a fixed distance. The degree to which the traveler's health is ultimately impacted will, of course, depend on where they are and what route they take.

RG: What walking and cycling speeds do you recommend based on your findings?

Bigazzi: The findings show that there is an optimal speed which leads to the least total pollution inhalation dose over a trip - what I call the minimum dose speed (MDS). The MDS depends on a number of personal, bicycle, and roadway factors, such as body mass and road grade. Across a wide range of people, the MDS is 3-6 km/hr walking and 12-20 km/hr bicycling on level ground. The MDS is lower when going up hills. For the vast majority of people, the MDS corresponds to a moderate exercise intensity on relatively flat terrain. Moderate exercise intensity can be roughly judged as being too winded to sing, but not so winded you can't hold a conversation. The good news is that moderate exercise intensity is associated with the positive health benefits we expect from exercise.

RG: How do these speeds compare to how fast most people cycle and walk?

Bigazzi: The minimum-dose speeds are similar to what we see in on-road studies of people walking and biking. So people are already traveling around their optimal speeds from an air pollution point of view, which is good news. I don't imagine this is because they're trying to minimize their inhaled dose, and speed choice behaviour is something I'm in the process of researching.

RG: Why is it worth being conscious about limiting our exposure to air pollutants?

Bigazzi: There is a large body of literature showing diverse negative health impacts of air pollution on urban populations. There are also some studies showing acute health impacts over very short exposure periods, such as a single commute. There is even some recent work suggesting that air pollution can counteract some of the positive neurological effects of exercise. Unfortunately, because some of the most worrying health outcomes, like cancer and cardiovascular and respiratory diseases, tend to be the long-term result of years of cumulative exposure, it is still challenging to translate variations in on-road inhalation doses to major health outcomes.

There are also thousands of different toxicants in urban air pollution, and we don't have great understanding of which are most responsible for the observed health effects. We should be cautious about predicting effects from trip-level changes or comparing very different types of health mechanisms that happen over varying time scales, such as air pollution risk versus exercise or crashes, for example. I'm more confident saying that we know inhalation of air pollution presents a substantial health risk, and so whatever we can do to minimize pollution inhalation, the better.

I do not want to discourage people from engaging in more vigorous exercise, like power walking, jogging, or sport cycling, in cities. Especially in Europe and North America, where there is evidence that the net health effects are positive.

RG: Are there ways other than speed regulation people can limit their exposure to pollution while walking and cycling in cities?

Bigazzi: Absolutely. Route choice is very important, and recent work has shown that choice of a lower-traffic route can significantly reduce the amount of pollutants absorbed by the body over a single trip. It's particularly important for those exercising vigorously to avoid high-traffic streets, because the total volume of air and its pollutants you inhale can easily be 2-4 times higher than at a more moderate pace.

RG: Has your research changed your own walking or cycling behavior?

Bigazzi: It's hard not to be more conscious of my breathing when I'm bicycling. My typical speeds are above my personal MDS, so when I'm on busy streets, I try to moderate my speed. But when I'm off on a quiet street that I know is fairly clean, I let myself speed up. And I already avoid higher-traffic roadways more because of my other work on route choice.

RG: What do you hope the public will take away from your study?

Bigazzi: I always like to emphasize that I am not suggesting that people should not engage in active transportation like walking and bicycling. We should acknowledge that there are certain risks associated with it, and try to minimize those risks while still reaping the many benefits.

US Presidential Election 2020
Breaking news, analysis and the latest polls on the presidential race from HuffPost’s politics team
See More
Voting Made Easy
Register to vote and apply for an absentee ballot today
Register now
More:
Pollutionhealthy livingCycling citiesHealth
Newsletter Sign Up
The essential guide to taking care of your mind and body
Subscribe to HuffPost’s wellness email
Successfully Subscribed!
Wellness delivered to your inbox