At 5 am as many as 500 cars and trucks are lined up outside the gates of the fairgrounds in Fresno, CA, waiting here for hours as the sun rises and slowly lifts the persistent morning fog off the valley floor. Many of the people in the line even camped out here overnight to get something that might not normally be that thrilling... a tailpipe emissions test.

Nearly three-quarters of the cars in this line will fail the emissions tests, and almost half of them have been driving around as unregistered vehicles for quite some time. Many of the people in the line have one car per family to get to work plus get all members of the family where they need to go every day. So, it's not like they retire the car and stop going to work just because they can't pass the emissions test. They simply don't register the cars, but they keep on driving them.

Because these polluting cars are not registered with the Department of Motor Vehicles, technically, at least according to the records, these cars don't exist. But try breathing and you'll know they exist as soon as the air hits your nose, eyes and throat. The American Lung Association named the Fresno/Madera area most polluted city in America for particle pollution and fourth worst in America for ozone pollution in its 2014 State of the Air Report.

"The problem with high-emitting cars is obscured by the high rate of unregistered cars in this group," says Tom Knox, executive director of Valley CAN, a non-profit that works on air quality in communities in California's San Joaquin Valley. "These are the dirtiest cars in already the dirtiest air in the country."

For the past eight years, Valley CAN has operated "Tune In and Tune Up" events, like this one at the Fresno fairgrounds, throughout the San Joaquin Valley. Funded by the Valley Air District, participant vehicles undergo an emissions test and, upon failing, will receive a voucher worth $850 toward approved emissions-related repairs.

"As few as five percent of vehicles may be causing one-half of the state emissions," explains Knox, who helped implement the program. Those five percent are cars low-income people are driving because no one who has another choice drives cars like this. They come with breakdowns and expensive repairs and are generally unreliable. Knox calls this "a confluence of low income and high emissions vehicles."

"Some of the cars just should not be fixed. They are at the end of their life," Knox says. "For cars 1995 and older, it's often not feasible to repair them to make them a clean vehicle."

In order to address this issue a new pilot program will go into effect in California in April that offers owners an incentive for retiring cars 1995 and older with a failed emissions test. If your income qualifies you to participate and you retire your old vehicle, you will get $4,000 toward a low emissions gas vehicle, $7,000 for a hybrid, $8,000 for a plug-in hybrid, and $9,500 for an electric vehicle. The pilot is being funded with money from California's carbon reduction law, AB 32, which requires companies who don't meet state mandated emissions requirements to buy carbon permits at auctions. State law requires a portion of the auction money to be invested in programs in low-income neighborhoods.

Valley CAN just completed a pre-pilot program and retired 108 high-polluting cars. These retirement and replacements were for lower emissions gasoline cars. A typical transaction under the program might consist of trading a 20 MPG 1991 Oldsmobile Cutlass with 240, 000 miles for a 30 MPG 2011 Toyota Corolla with 44,000 miles. There's a burgeoning market for reasonably priced used electric vehicles now, and a driver who takes advantage of the increased vouchers for plug-in hybrids and electric vehicles will cut pollution even more. Driving on electricity is roughly the cost equivalent of dollar-a-gallon gasoline. For families that spend a disproportionate share of their income at the gas pump, this could make a real difference financially. 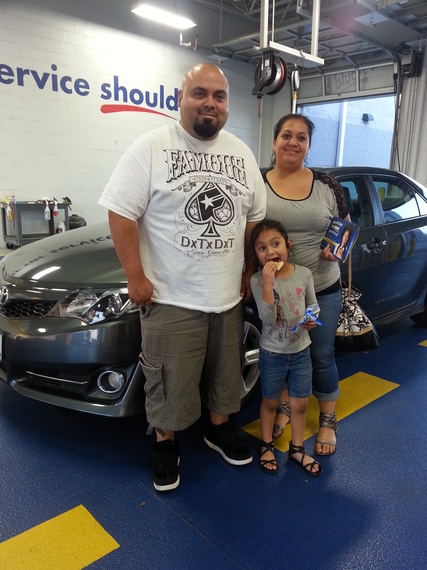 Individuals who get better cars not only reduce pollution but also seem to have a better chance of getting to work regularly with fewer breakdowns. For example, Marisol Rivas of Stockton has always lived within a budget. Her family spent a significant amount of money repairing their car, and so could never buy a new one. Their 1995 Isuzu Trooper was always breaking down, frequently leaving the family stranded. Now that their 2012 Toyota Camry doesn't require costly repairs, they are hoping to put the savings towards a down payment on a home. "The peace of mind that one has knowing you are driving a reliable car is something that is not easily explainable!" remarks Rivas. Electric cars, with fewer moving parts than their internal combustion counterparts, offer potentially even greater savings on maintenance.

Qualified individuals now have a choice, but it may not be an easy one. They can redeem the voucher and fix a car they know is going to continue to break down. Or take the retirement incentive and purchase a reliable low emissions vehicle with a car payment in lieu of a monthly car breakdown budget. About 25 percent, under the pre-pilot, just can't do the car payment, Knox says. But for the rest, there are some pretty good deals on used cars at CarMax the dealership Valley CAN uses to help people find qualifying vehicles, including used electric vehicles.

For those drivers who opt for a plug-in vehicle, the question is often, "Where do I plug in?" The good news is that plug-in hybrids like the Chevy Volt can be fully re-charged overnight on standard household electrical outlets. Those who opt for pure electric cars, like the Nissan LEAF, will likely want to install a charging station on a 240 volt outlet (like what your dryer uses). Either way, it's a lot more convenient to re-fuel at home than to go to the gas station and deal with wildly volatile gas prices.