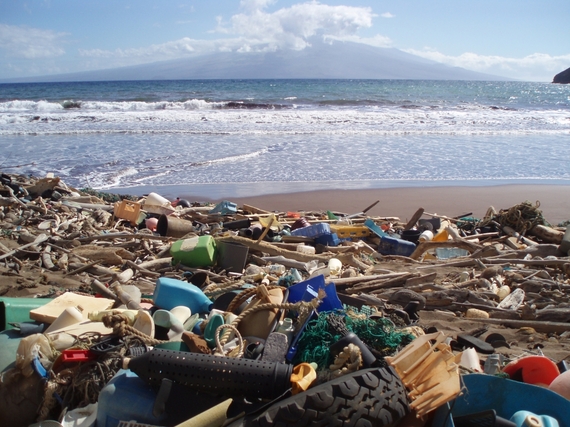 Trash from the Pacific collects on the shores of Kanapou Bay, Hawaii, roughly halfway between the Great Pacific Garbage Patch and the Marshall Islands.
Image courtesy of NOAA

In the north Pacific Ocean there is a swirling murky soup of debris known as the Great Pacific Garbage Patch. Mostly composed of small non-biodegradable plastic particles, the patch (or patches) stretches for hundreds of miles and is fed by trash from Japan, The United States, and other countries lining the Pacific.

Thousands of miles south of the garbage patch, the Marshall Islands are battling climate change. Over the past few years, the small nation of narrow, low-lying islands has been coping with unprecedented, destructive weather patterns. Climate scientists have projected that rising ocean levels could entirely overtake the islands by the end of the century if we don't drastically reduce greenhouse gas emissions worldwide.

The extremes seen in the Pacific offer a warning to the rest of the world. Waste and pollution have spiraled out of control and those least responsible have been most affected. Recent reports on climate change predict that those in developing nations will continue to be hit hardest by climate change, as they are least prepared to deal with disasters and tend to be located near coastal or tropical regions.

Though many fear that environmental conservation poses challenges to ending poverty, these two are not opposing forces. In fact, environmental degradation is profoundly linked to inequality, and an approach that targets one and not the other is destined to fail.

The history of inequality and environmental degradation are closely interwoven and stretch back beyond the pre-industrial era.

Traditionally, as Ethnologist Claude Lévi-Strauss notes in The Science of the Concrete, those most equipped to steward a region are its indigenous, who have developed a rich understanding of the local ecosystem. Lévi-Strauss points to several groups to illustrate this, including the Coahuila, a Native American tribe which, despite consisting of several thousand members, "never exhausted the natural resources of a desert region in South California, in which today only a handful of white families manage to subsist."

Yet a narrative arose in Western history that the shift from this type of local subsistence to a more industrial economy spreads prosperity. In fact, as feminist scholar Silvia Federici recounts in Caliban and the Witch, even England, the epicenter of the industrial revolution, didn't witness this pattern. Federici explains the effects the English saw of enclosing on communal lands to make way for industry:

Land privatization and the commercialization of agriculture did not increase the food supply available to the common people, though more food was made available for the market and for export. For workers they inaugurated two centuries of starvation, in the same way as today, even in the most fertile areas of Africa, Asia, and Latin America, malnutrition is rampant due to the destruction of communal land-tenure...

Federici goes on to describe the kinds of further stratification and environmental harm that resulted from dissolving communal lands, exploiting the now-landless for cheap labor, and expanding industry. Still, faith in the inherent prosperity of this new order remained intact for those in power. The spirit of this belief, as well as its violent logic was summed up well by Cecil Rhodes, one of Britain's greatest proponents of African colonization, in 1895:

I was in the East End of London yesterday and attended a meeting of the unemployed. I listened to the wild speeches, which were just a cry for "bread," "bread," and on my way home I pondered over the scene and I became more than ever convinced of the importance of imperialism. ... My cherished idea is a solution for the social problems, i.e., in order to save the 40,000,000 inhabitants of the United Kingdom from a bloody civil war, we colonial statesmen must acquire new lands for settling the surplus population, to provide new markets for the goods produced in the factories and mines. The Empire, as I have always said, is a bread and butter question. If you want to avoid civil war, you must become imperialists.

Despite a clear failure of industrialization alone to provide for lower classes, this misunderstanding persisted. At best this movement outsourced England's poverty and environmentally destructive industry, at worst it destroyed the culture, autonomy, and homelands of millions under colonial rule for the benefit of a few. 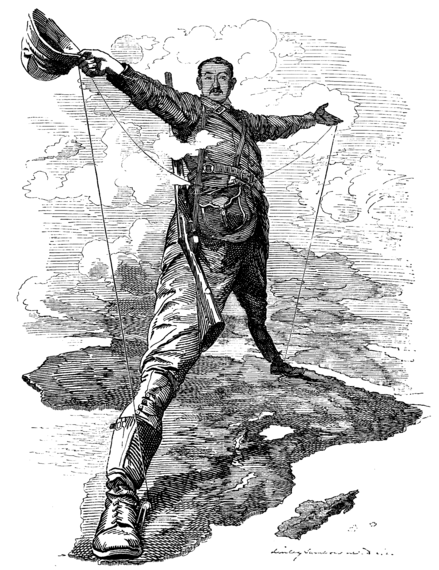 It's important to realize how this line of thinking is still hugely influential today as developing nations remain prime targets for businesses looking to offload pollution and exploit cheap labor.

In the past decade alone, while supporting development projects aimed to fight poverty, the World Bank has displaced 2.3 million people, nearly all in Sub-Saharan Africa, China, India, and Vietnam, and failed to provide the displaced with the protections they were promised. Meanwhile structural adjustment programs from the IMF in conjunction with trade agreements like NAFTA have kept wages low and environmental regulations lax. While details of the newest proposed trade agreement, the Trans Pacific Partnership remain unavailable to the public, the United Nations recently expressed concerns that the treaty could "aggravate the problem of extreme poverty, jeopardize fair and efficient foreign debt renegotiation and affect the rights of indigenous peoples, minorities, persons with disabilities, older persons, and other persons [living] in vulnerable situations."

In recent years, the concept of "sustainable development" has emerged as a proposed balance between environmental and humanitarian concerns. As the concept gains popularity, we need to keep this history in mind. When conflict arises, we need to advocate for native peoples at risk of being removed from their lands, whether through industrial development or climate change. We need to look not just at pollution caused by production, but also at the consumption that creates its demand.

Sustainable development shouldn't just create more jobs, it should improve wages and work safety. Sustainable development shouldn't just be the regulation of factory emissions in the Third World, it should address the ravenous demand caused by first world materialism. Human beings are more than just their labor and our environment is more than just a collection of resources. As wealth is tied to poverty, need is tied to waste.

In searching for practical steps to reflect this mindset, first world nations could learn a lot from the Marshall Islands. Though its inhabitants are relatively few, they have made drastic changes to their lifestyles in recent years. The country has implemented many renewable energy initiatives including the conversion of more than 95% of the nation's homes to solar power. Locals have also been transitioning from diesel powered shipping and transport to traditional Marshallese sailing and canoeing. Alson Kelen, a Marshall Islands resident who teaches traditional canoeing skills explains:

Culture is the most sustainable way of living. If we had followed those traditions, we probably wouldn't have had this problem with climate change.

The nation has even considered repurposing some of the world's abundant trash to fortify its coastline.

At the UN climate summit last September, Kathy Jetnil-Kijiner, another native of the Marshall Islands expressed her frustrations, sorrow, and hope for this situation as she read a poem she wrote for her daughter. Her perspective is one we don't hear often enough: