Limbe, Cameroon -- In Central Africa, on the edge of the immense Congolean rain forest, I recently convened with colleagues from WCS and BirdLife International to discuss how best to conserve the African Grey Parrot, one of the most popular birds of the pet trade worldwide.

Thanks in no small part to Alex, the subject of intensive studies by my colleague Dr. Irene Pepperberg, the African Grey is also one of the best-known species to demonstrate intelligence. Irene's studies revealed that Alex could make accurate use of human speech and syntax, and seemed to convey thoughts and feelings. 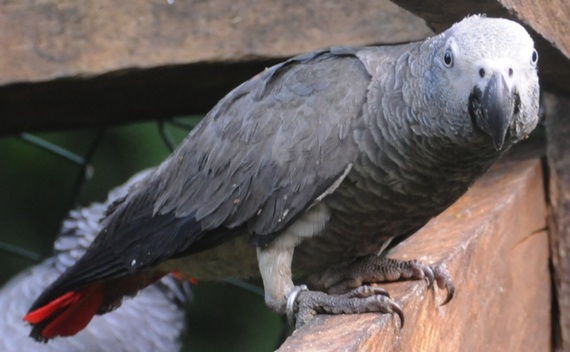 African Grey parrots are captured in great numbers for the pet trade, legally and illegally. This parrot is being rehabilitated after confiscation from illegal trade in Cameroon. Photo credit: Steve Zack/WCS

Two paradoxes to explore. First, the very popularity in the trade of this bird may place it in jeopardy. It is now listed by IUCN as Vulnerable due to declines in its range and numbers. While imports of wild parrots are now illegal in the U.S. and in Europe, the trade continues to grow in Asia and the Middle East.

Possibly as many as four to eight million of these parrots have been captured from Central Africa's rain forests in the past 40 years. Such trade is a complicated mix of legal and illegal activities, and the capture in the field and transfer to ports for export is fraught with mortality.

The Convention on International Trade in Endangered Species of Wild Flora and Fauna, or CITES, is an intergovernmental treaty designed to ensure that this trade does not threaten the survival of species in the wild. With respect to the African Grey, we don't know because we don't have baseline numbers from these forests.

We are now trying to figure out how best to establish that baseline for the first time, and add these parrots to ongoing surveys of other important wildlife done by WCS and partners in this incredible part of the world.

The African Grey Parrot is both hyper-social and hyper-mobile in nature. It can convene in great numbers in roost trees and riverside palms, in fruiting trees, and in forest openings ("bais") with mineral salts. Yet such aggregations, spectacular and conspicuous as they are, give no real information on their population size.

They do seem to travel great distances in nature, yet efforts to use tracking devices on this bird have been unable to survive their powerful beaks. To date, we really don't know how far the birds move across these forests. Without such information, we can't understand the size of the area from which their numbers are drawn. 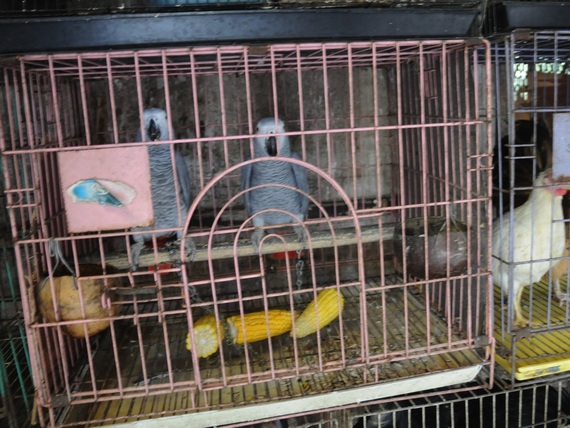 The challenge, therefore, is to survey these parrots in the immense forests while they are quietly going about their daily business. Only then can we gain the density estimates that will help provide an overall population estimate. And we can do so only if we coordinate such efforts in the vast forest habitat across the countries of Central Africa.

Second paradox: We know and love this bird from captivity and yet know very little about it in nature. I think that we need to change the narrative from seeing the Grey Parrot as a charismatic, chatty, and intelligent species in captivity to one where we seek to understand and explain this species as an amazing wild bird.

Doing so will help compel its conservation in nature. What is the social and ecological context in nature of this bird's remarkable mimicry and problem-solving abilities? Its intelligence and sentience didn't arise in a vacuum.

Further, do African Greys play an important role in these forests? Are they effective as seed dispersers for rain forest trees? Finally, do these long-lived birds produce enough offspring to offset the trade demand? In Congolean rain forests filled with elephants, gorillas, chimps, and raucous hornbills we hope to find answers to these questions. 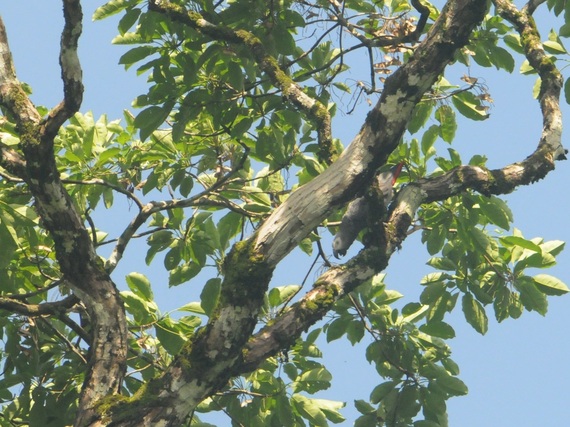 I was able to visit Camp Ma'an National Park in southern Cameroon after our gathering and see African Grey Parrots in the wild for my first time (and gain a fleeting glimpse of another recognized, intelligent animal -- a chimpanzee!).

There, amid huge trees and a myriad of diverse green colors, I saw these parrots in pairs quietly going about their daily rhythm of fruit eating and preening. In the mornings and evenings, I frequently saw them flying overhead and calling loudly -- a great sound in a great setting. Thrilling and affirming, they belong in these forests.

The African Grey Parrot: intelligent and highly social residents of Central Africa's rainforests. A chapter yet to be written, and a conservation outcome to be secured. Our own sentient species needs to appreciate that if we are to gain the necessary insight into this fascinating feathered denizen of the Congo.