Yelling "FIRE, FIRE!", my six-year-old brother came scrambling down the hill toward our back yard. Behind him rose a plume of black smoke. The campfire he had started did not stay small, spreading to the dry grass.

Neighbors reacted, charging up the hill like army ants.

When we got to the top, a wall of crackling flame was closing in on a seemingly abandoned wooden shed, and behind that a small neat house with nobody home.

My father uncoiled a lengthy garden hose; I found a stack of old throw rugs. Everybody attacked the fire, stopping it just short of the little shed.

Curious to know what we had saved, I poked my head inside . In the quiet shadows were rows of stacked cans marked "FLAMMABLE"--paint thinner...

If we had not stopped the burning when we did, I might not be writing this column.

What interests me now is the stages of the fire, and how that relates to a terrible disease: leukemia, which took the life of my sister Patty.

Leukemia is a cancer of the blood. Ironically, it appears to be spread by the patient's own stem cells. Most stem cells are helpful, but cancer stem cells are a deadly variety, and the body may not recognize them as dangerous. Learning how to defeat these "evil twin" stem cells is one of the great goals of the California stem cell agency.

In 2003, a small elegant woman named Theresa Blanda was diagnosed with polycythemia vera (PV), a disease where the blood thickens, producing too many cells.

Complications ensued. Like the spreading fire, her condition grew worse, becoming myelofibrosis, a form of bone marrow scarring. Her bones ached, her knees swelled. She had difficulty breathing when lying down, because her spleen enlarged. She had to quit work.

And waiting just ahead, like the paint-thinner explosion if we had not stopped it? The blast of cells, acute myeloid leukemia (AML), which killed my sister.

"You couldn't even breathe my way, or I'd bruise," said Theresa Blanda. "I did not think I was going to make it..." she said.

Partially funded by the California stem cell agency, Dr. Catriona Jamieson had made a discovery that might have a tremendous impact on Theresa's health.

She found a mutation in the blood-forming stem cells... in a gene called JAK2.

Like the lighting of my brother's match, that mutation was the start of everything bad. But what if the flame could be put out?

What if that mutation could be inhibited?

Theresa Blanda was admitted into a clinical trial, where she received a JAK2 inhibitor being developed by a San Diego biotech company, TargeGen, Inc.

She began to be able to breathe normally, because her spleen shrunk back. She could climb stairs again, as the knee swelling went down, as did the bone pain -- and she went back to work.

For five years everything seemed fine -- and then the FDA pulled the plug on the clinical trials. Some of the other patients had developed negative side effects.

As veteran science writer Bradley J. Fikes put it, "without the drug, her health began to regress. After having a seizure, she was rushed to the intensive care unit."

But Dr. Jamieson and her team would not give up. Racing against time, with Ms. Blanda's life literally hanging in the balance, they developed another inhibitor, which the FDA put an emergency rush on, and allowed. 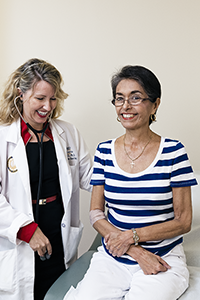 And, in affirmation of her faith in the future, she is getting married, to her childhood sweetheart...

In addition to the California stemcell agency and the Jamieson team, a wonderful collection of organizations cooperated: the Dana-Farber Cancer Institute, the Moores Cancer Center at UC San Diego, the Mayo Clinic, the Food and Drug Administration (FDA), a parallel study by Harvard Medical School-- and a small courageous biomed outfit called TargeGen.

All those people working together in a fight to save lives...


Don C. Reed is the author of STEM CELL BATTLES: Proposition 71 and Beyond: How Ordinary People Can Fight Back Against the Crushing Burden of Chronic Disease: with a Posthumous Forward by Christopher Reeve. Published by World Scientific Publishing, Inc., available for pre-order at Amazon.com.