It's late on a Wednesday in September, and the boys of Polyenso -- Alex Schultz, Brennan Taulbee and Denny Agosto -- are headed to The Bends, one of their favorite bars in St. Petersburg, Florida. The walls adorned with oddities: a brass taco, a caged monkey, a gargoyle who looks like a demonic Yoda and a picture of a youthful, mustachioed Burt Reynolds enshrined above the center of the bar. The Bends acts as Brooklyn-ish transplant, serving as a refuge for the young adults of St. Pete who are looking for something outside the stale polos and short-sleeve, button-ups that permeate so much of the city like a bad rerun of "Miami Vice."

As our basic introductory conversation begins budding into new friendship, an informercial, of sorts, comes on the television that flickers on the back wall of the bar. Sequence after sequence, middle-aged men in suits cut through pig’s heads, turkeys and rope pillars with two-handed swords, axes and all sorts of exotic knives. The set looks like a medieval dining hall. Enraptured by the video’s absurdity and awesomeness, we are all struck by the same thought: “We are totally going to cut some large objects with a sword one of these nights.”

And so we did. It’s funny how far a joke can go after a trip to Walmart and a few stops at bars.

"It just has so many deep, beautiful meanings to it. To us it represents perfection within imperfection."
Polyenso breaks down into two parts: “poly” and “enso.” “Poly,” the prefix meaning "many," also captures the band’s proclivity for polyrhythms. "Enso" is a symbol in Zen Buddhism that is a circle drawn in a single brushstroke. Never a perfect circle, thicker and thinner at certain sections, among many things it expresses a “moment when the mind is free to let the body create."

“We knew the music was going to have these electronic elements sprinkled in,” Schultz said. "We knew it was going to be some types of music that maybe people haven’t combined before. ‘Poly' kind of had that futuristic thing to it that we loved. But then we ditched ‘poly' and I discovered 'enso' and brought it to the guys. It just has so many deep, beautiful meanings to it. To us it represents perfection within imperfection. You do it once and the beauty is in that imperfection. We went back to ‘poly' and not only did it have this ring to it, but now we have 'enso' and we’re each our own. It represents something a little different for each of us.”

The band released their debut album, “One Big Particular Loop," at the beginning of 2013, an exceptional record that captured stylings of acts such as Radiohead, R.E.M. and Coldplay. For several months now, the band has been in studio crafting their sophomore album, before premiering the first track, “17 New Years.”

While there is a tying thread between their harmonic choices, rhythmic choices and Taulbee’s vocals, Polyenso’s new work is a significant departure from their debut. Described as "urban indie progressive" by Agosto, the album demonstrates their listening habits of hip-hop, neo-soul and experimental electronic music, mashing elements from acts like Flying Lotus, Bonobo, Common, The Roots, Bright Eyes, Bob Dylan, The Beatles and Justin Timberlake. But when it comes down to it, Polyenso has created a sound that is entirely their own. As Schultz notes, the failure to sound like your idols is how you create your own sound.

“The common goal is to find our version of a universal sound, as hard as that is because you can’t please everybody,” Agosto said. "I feel like it’s important to take a lot of those modern influences or old influences and put it in a cadence that is simple to understand, and, at the same time, be new and recycled.”

“It appeals to a wider genre, but taps into a more abstract style,” Taulbee said.

Recording in label Big3’s studio in St. Petersburg, the band came to producer Jason Pennock’s attention after a local promoter told him there was “only one band here worth knowing.” A long history in the business, having worked on a variety of hip-hop and pop records from Tupac to The Pussycat Dolls, Pennock described Polyenso as “some of the most creative people he has ever met.” He labeled his role as more of a psychiatrist, pushing and nudging the band instead of controlling, and encouraging the guys to be “wickedly honest” with each other.

“We’re all in the room a slave to the song,” Pennock said. "The song is actually more important than any of us, so leave the ego at the door because as much as I’d like my precious idea on the song, it’s more about the song dictating itself. They just live inside that space. There’s so much trust. They allow each other to make mistakes and explore.” 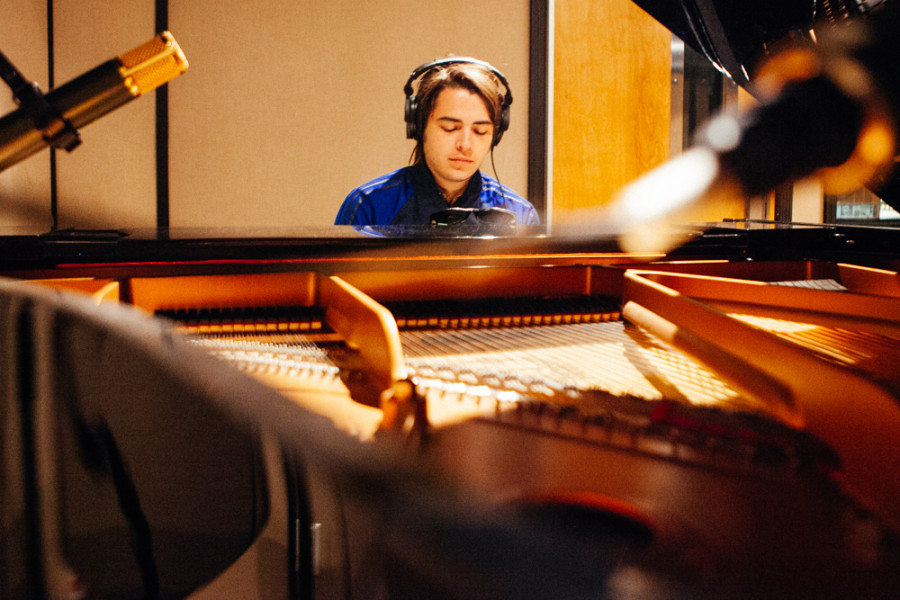 "That way you aren’t just hearing the guitar, drums, bass, piano, whatever your instruments may be. You hear almost a whole movie scene.”
For the new album, the band decided to rid themselves of all rules and barriers and experiment with a whole different approach to songwriting. Written almost entirely while in studio, they have forgone concerns of live-performance translation, choosing to focus on each song in that exact moment. Even when a track is fully written, they can think of something different, switch out those parts and give the song an entirely different vibe from where it started.

Hanging out in the studio's kitchen, Schultz explained how each member has a hand in every instrument, and that there is no limit to the sounds they are hoping to capture on the album.

“This is one of my favorite instruments,” Schultz said, pulling out a wooden bowl from below the sink. We were sipping on rum and cokes. “It just sounds so good.”

“And the spatula that he plays it with,” Pennock added.

“The spatula was a great find,” Schultz said. "That’s on like three tracks."

Besides kitchen utensils, Agosto has taken his passion for sound design to add organic noise into the songs.

“Brennan showed me this Bright Eyes song from the album 'Digital Ash in a Digital Urn,' and the lyric was, 'I feel like a piñata, why don’t you take a swing at me,’” Agosto said. "They put sample in the background of kids smacking on something, and they were laughing at the same time, and that painted the scene for me. I’ve heard it in other things before, but it never got my attention like that did. From then on, and that was quite some time ago, now I want certain parts or certain words in songs to make you feel like you’re there. I just take live sounds of certain things, and make instruments and samples out of different things that I hear. That way you aren’t just hearing the guitar, drums, bass, piano, whatever your instruments may be. You hear almost a whole movie scene.”

For example, one song includes the lyric “I’ll be going away for a little while, getting on a plane, thinking about not landing.” When Taulbee sings "getting on a plane,” Agosto added the ding of the seatbelt sign he recorded on an airplane, and when Taulbee sings “not landing,” he added a recording of a pilot saying, “Enjoy your flight.” They are subtle details, but they add an incredible amount of depth to the record. 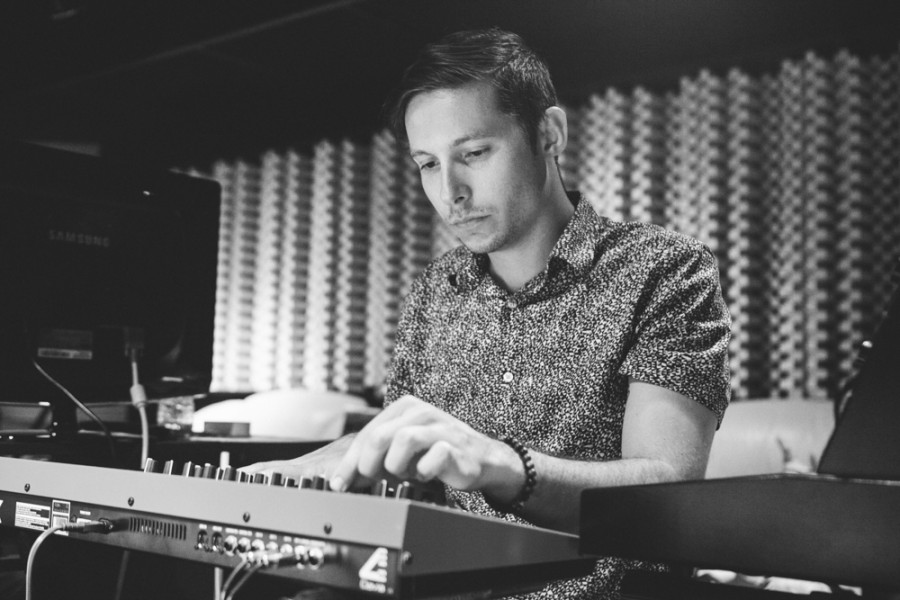 "It’s the shallow part, so if the singer is sexy, it’s like, 'Hell yeah, man, I wanna date this band!'”
“17 New Years” is about a moment in a relationship when you realize that the person you love is using you as a scapegoat for their past emotional injuries. And despite how much you care for them and want them, you can’t let them bring you down. “Is that all I meant to you?” the chorus begs, even though the answer is already known.

"It’s a really relationship-y record,” Taulbee said. "It’s about being friends, having your heart broken and really loving somebody.”

The song marks the first vocal appearance by Schultz, who handles the chorus. Taulbee sings the verses.

“There’s this dynamic between the two of them that was never there before,” Pennock said. "I’m a big fan of Brennan’s voice; he’s like a god to me. Being involved with projects, it’s like when you meet a girl, the lead singer is so important because no one falls in love with a girl at first because of her personality. It’s always the pretty factor, so the singer is that. It’s the body. It’s the shallow part, so if the singer is sexy, it’s like, 'Hell yeah, man, I wanna date this band!' And then you meet them and you realize they’re the marrying type. Not only is she hot, but she likes football, too. It’s the singer first, and the songs and always these little qualities and you think, 'I can bring this band home to mom.’ Now, his dynamic has changed it. He didn’t do a lot of singing before, but it all just started with one part in one song. [...] Could I listen to a whole album of just Brennan? For sure, but each have their own tone, so adding Alex’s vocals in just takes it to the next level.” 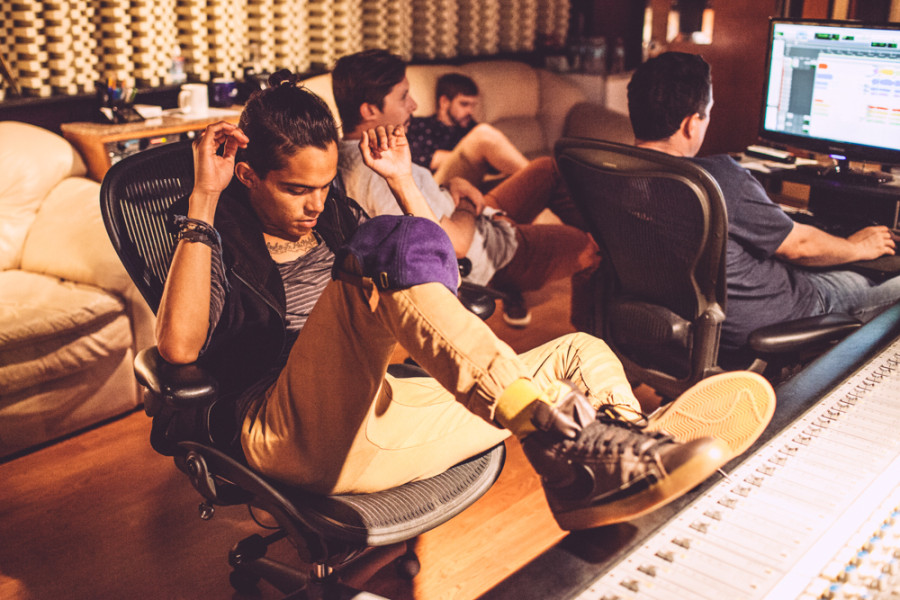 That's what Polyenso represents. It is truly rare to witness individuals who are absolutely in tune with their artistic vision and capabilities at work. It feels like a step into the future, where not only can you see the significance of what they are currently creating, but also how important they will be going forward. There’s something very spiritual to their music. From start to finish, their songs capture you in a moment, and in that moment we are all imperfect perfect beings together.