Story has been updated to reflect the latest arrest numbers.

Pomona College dining hall workers and their supporters conducted a sit-in Friday to protest the school's termination of workers who cannot verify their legal citizenship. Sixteen dining hall employees were terminated, effective Friday, and instead of collecting their last paycheck, they came to work chanting "We're here and we're not leaving."

The dining hall workers were joined by supportive students, professors and alumni from Pomona College and the other Claremont Colleges, as well as by a number of campus employees who also received threat of termination.

Unite Here Local 11 Communications Coordinator Leigh Shelton told The Huffington Post that there were roughly 300 protestors in attendance. School officials estimated there were 150 to 200 demonstrators.

The organizers made it clear that it was their intention to have 17 protestors arrested, in solidarity with the 16 terminations, plus one stalled termination pending documents. The university declined to arrest demonstrators as long as they were peaceful, but later, as a result of negotiations with the organizers, the Claremont Police arrested 17 demonstrators for blocking an intersection.

Shelton tweeted from the protest, "100s of students rush @pomonacollege dining hall in protest unjust firing of immigrant workers;" "'Above all this is humiliating,' says fired @pomonacollege cook of 9 years;" and " After 23 years @pomonacollege fires Felipa Sanchez for not showing her papers."

The terminations started with a Nov. 7 letter the university sent to 84 employees stating that, if they did not resolve deficiencies found in their files by Dec. 1, they would face termination. The letter explained that the Board of Trustees had received a complaint that several campus employees were in the country illegally.

The action comes as dining hall workers have been trying to organize an independent union for about two years. As the Los Angeles Times reports, union negotiations with the college are currently stalled.

Cynthia Peters, media relations director for the college, told HuffPost, "The terminations had nothing to do with the union organizing. The two issues are completely separate."

In a school-wide email, Paul Efron, chairman of the Board of Trustees, wrote “We agree that the College and some of its employees have been placed in a difficult and unfortunate situation, which we wish could have been avoided. However, while many of us believe that the country's immigration policies are in need of reform, it is important to emphasize to the Pomona community that the College has a responsibility to comply with the current laws.”

As the Pomona College student paper, Student Life, reports, Pomona visiting professor of politics and Yale law graduate Michael Teter challenged Efron’s legal reasoning in an open letter to the Board of Trustees, “The decision to conduct an audit of the I-9s demonstrates, at best, overzealousness and, at worst, a fundamental disregard for the dignity and privacy of every employee. To seek to justify the College’s actions by referring to a discredited allegation and to federal law is disingenuous."

Regarding the close timing of the termination to union organizing activity, Teter wrote that the college's “intrusive and arbitrary verifications.. may also have violated the National Labor Relations Act.”

Dining hall employees--some of whom have worked for the college for 10 to 20 years--say their citizenship status has not come up with the school until now. Christian Torres, who was a cook at the college for seven years, told HuffPost, "After seven years of working very hard, I feel confused, disappointed and sad. I just don't understand why they're doing this."

CORRECTION: An addition has been made to this story to clarify that protestors intended on being arrested. 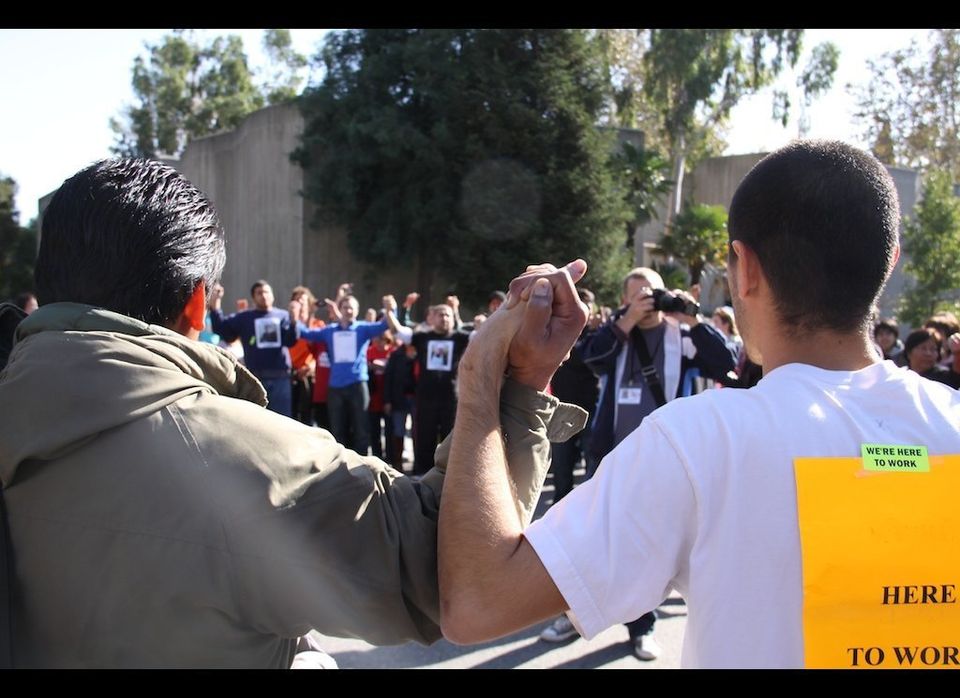