Is it a bird? Is it a plane? Is it some guy dressed (very badly) as Superman? Well, it could in fact be any of these (or one of a myriad of other weird costumes) as pond skimming season is upon us!

Rites-of-spring events at ski resorts are around the corner. This is the time when we get to see totally rational people (or not) pop on a costume and try to ski, board, or slide on some other device across a stretch of icy water. You know it makes sense!

There's something primeval about that springtime feeling, when you know that the end of the ski season is nigh. There's no longer any desire to ski hard, you just want to kick back and celebrate spring. What better way than stripping off all that super efficient skiwear and trying your luck at water crossing on your skis or board! 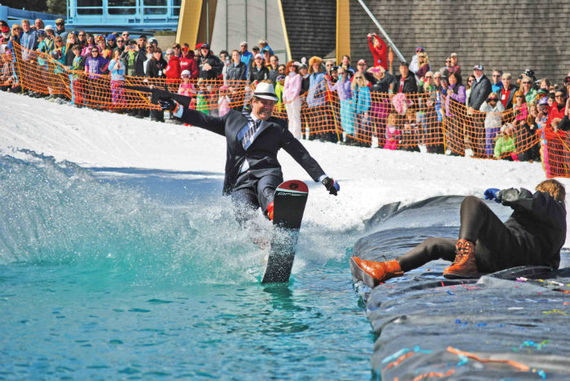 Sometimes called 'Slush Cups' (or 'Slush Huck' in Crested Butte's case), the number of pond skimming events at ski areas around the world has grown over the decades. Now, there are probably fewer resorts that don't have some sort of pond skimming contest than those that do.

Banff in Canada claims to have the oldest event, and this year will stage the 87th Annual Slush Cup during the last weekend of their very long season on May 18th. Sugarbush in Vermont, who stages their event on the last weekend of every March, has one of the larger ponds to cross -- a 120 foot long stretch of water at the base of Lincoln Peak. Vail hosts their World Pond Skimming Championships each year, even having Red Bull as a sponsor in the past.

In Montana, Big Sky organizes what's undoubtedly among the planet's biggest and best annual pond skimming contests -- and certainly with the slickest videos. Each year, the resort tries to rack it up a notch further. In 2011, there were two successive pools on the slope with a small area of snow between them. A contestant had to cross one, stay on his/her feet on the snow, then tackle the next. In 2014, there were two side-by-side water pools, one with a jump next to it and another with a long rail across it. Inflatable alligators waiting in the water added to the tension, or the laughs. It'll be interesting to see how they are going to top it this spring. 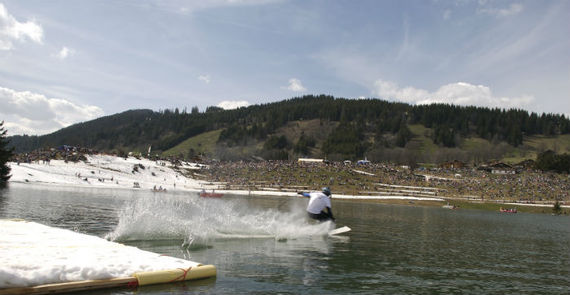 In the European Alps, one of the biggest events in the 'pond skimming calendar' (not that there is such a thing) is the annual Defi Foly contest at the French resort of La Clusaz. Here, skiers do not attempt so much to ski across a water pond, but instead across the local Confins Lake. The Confins Lake is frozen mid-winter, but the ice breaks by the time the competition begins in the latter half of April. Competitors hit the surface of this seriously-sized lake at high speed, wearing helmets and life preservers, while several rescue boats stand by. The record distance across of 509 feet (tantalizingly close to reaching the far bank) was set by one Philippe Troubat in 2010, beating the previous record of 477 feet that was set five years earlier by Freddy Quenet.

But, wherever you are at the end of the season, it's likely there's a pond skimming pool waiting at a ski resort with your name on it. Just remember to be quick to sign up as participation is so popular. Many resorts have to limit entry to the first 50 or 100 people to sign up.

Some of the Many Upcoming Events
April:

19: The Pond Skim at Mammoth, California 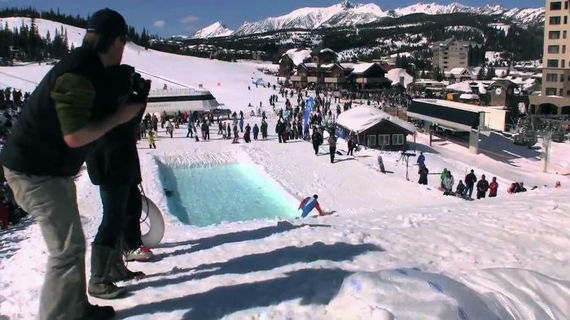