The "world's loneliest chimp" just got a warm and fuzzy gift.

Ponso was one of 20 chimps that were dumped on a tiny island off the Ivory Coast by the New York Blood Center, a medical testing company, in the early 1980s, the Humane Society of the United States told The Huffington Post.

According to SOS PONSO -- a Facebook page which advocates for the chimp -- Ponso is the sole survivor.  The rest of the 19 chimps died of starvation and disease, once the blood center stopped funding their aid.

Since then, Ponso's only friend has been a local farmer named Germain, who has fed him and buried the chimp’s last living relative -- his son -- in 2013.

After three years of solitude, Germain and his friend Mohamed recently brought Ponso a special gift along with their usual delivery of bread and bananas -- a cuddly teddy bear:

"Ponso was very interested by the teddy bear we bought," SOS Ponso wrote on Facebook. "He took it and brought it on the island, far from Germain and Mohamed."

In the above video, after Ponso has received his food, he can be seen reaching out to grab Germain’s hand and shake it. The two then playfully swing their arms together, until Ponso leaves for the forest.

According to a study conducted by International Union for Conservation of Nature on West African chimps which was provided to HuffPost from the Humane Society, Ponso's group was one of the New York Blood Center’s failed attempts to retire its lab chimps.

The New York Blood Center did not respond to repeated requests for comment from The Huffington Post.

In 1983, Ponso and 19 other chimps were taken to a small island in the Bandama River near Azagny National Park in the Ivory Coast. The initial objective was that the colony would eventually restock the wild chimpanzee population in the park. Yet, after eight chimpanzees disappeared or died from severe diarrhea due to an outbreak of shigella after just three weeks, the Ivory Coast government did not allow the chimps' release into the park.

A year later, in 1984, Ponso and nine other survivors were transferred to a smaller island where Germain's father was hired as their keeper, another one of Ponso’s advocates, Estelle Raballand, the president of Project Primate and founder of Chimpanzee Conservation Center, told HuffPost. He was paid a salary, the chimps were fed and a European veterinarian came a few times a year.

Posted by New York Blood Center: Do the Right Thing on Thursday, January 28, 2016

“We don't know when it stopped,” Raballand told HuffPost. “But Ponso and his family weren't fed by [NYBC] since 2005 when I first came to visit him.”

This was not an isolated incident.

The New York Times reported that NYBC decided to cut off funding for a colony of 66 chimps in Liberia in March of 2015.

The blood center released a statement on its website, stating:

The Humane Society of the United States has since picked up some of the slack and began to support the chimps. There's also hope for Ponso.

“We are working on a long-term plan to create ways to integrate new chimpanzees into existing social groups,” Kathleen Conlee, vice president of Animal Research Issues for Humane Society of the United States, told HuffPost. “But can't do so at this time.”

PONSO- A MIRACLE SURVIVOR ABANDONED BY NYBC:Meet Ponso, lone survivor of 20 lab chimps left to die by the New York...

Posted by New York Blood Center: Do the Right Thing on Thursday, January 14, 2016

In the meantime, Ponso has his teddy bear and the support of Germain and many others on the Internet who post using the hashtag #IamPonso:

To make a donation to SOS Ponso, go to its GoFundMe page, here.

To donate to the Humane Society of the United States, click here.

CORRECTION: A previous version of this story incorrectly referred to chimps as monkeys.

'World's Loneliest Chimp,' Abandoned On A Small Island, Gets Cuddly Teddy Bear
Lab Chimp That Had Babies Taken From Her Now Bonds With Troll Dolls 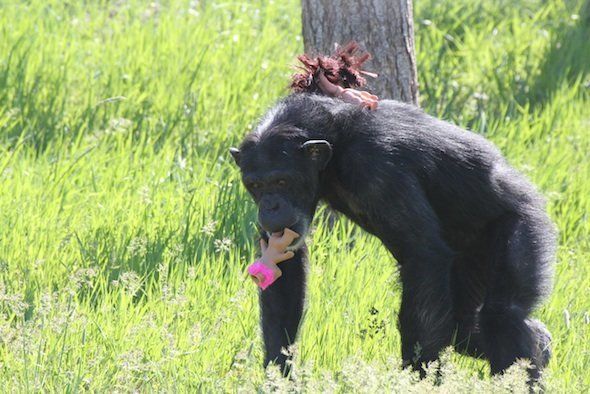