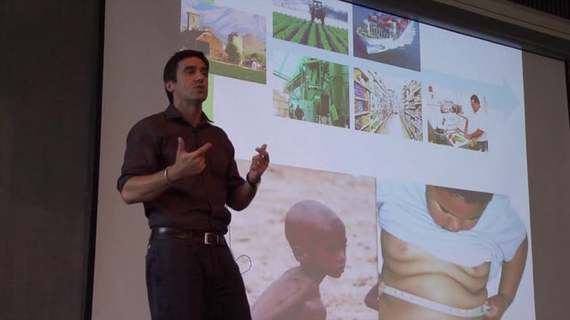 ImpactAlpha.com -- It's not surprising that impact investors believe environmental sustainability creates long-term value. That a traditional private equity investor is betting on sustainability -- that's a signal of an important market shift.

That shift has occurred in aquaculture, says Francisco Saraiva Gomes, CEO of Pontos Aqua Holdings, an investment company he formed last year with Tinicum L.P. to invest globally in aquaculture. Aquaculture is the world's fastest-growing agricultural sector and a larger protein provider than the global beef industry. Fish farms already supply half the fish consumed globally, and that share could rise to two-thirds by 2019, according to the World Bank.

"Real sustainability always drives cost-efficiency," he says. "Artificial sustainability might be cost-plus. But when the operations are really sustainable -- economically, socially, environmentally -- those things bring a confluence of technology development that benefits everyone, including the farmer."

The new firm has the flexibility to invest in publicly traded companies and private equity transactions. With its bankroll and mandate, Pontos Aqua has access to nearly every deal and dealmaker. Pontos Aqua is looking to make investments of $30 million to $150 million or greater in aquaculture companies that can serve as platforms for long-term growth.

"We invest opportunistically across the sector but focus mostly in four areas: health and nutrition, fish meal and oil, hatchery and genetics and large-scale farming," says Saraiva Gomes

The 39-year-old native of Portugal has managed many kinds of aquaculture operations around the world, from large corporations to venture-backed startups. "I have a holistic ecosystem view of the aquaculture value chain," he says. "While there still a lot of growth yet to come, there are also opportunities to invest in industry consolidation and efficiency."

Investors will get a look at a range of aquaculture ventures at the final event of the Fish 2.0 business competition next week at Stanford University. Acadia Harvest is growing Pacific Yellowtail in Maine and Kuterra is raising Atlantic Salmon in British Columbia, both in closed, land-based systems. Pacific Ocean Culture, based in Fiji, is producing giant clams, sea cucumbers, finfish, seaweed and prawns from sea ranching and aquaculture. Target Marine Hatcheries in Canada is raising white sturgeon and caviar.

Pontos Aqua sees a convergence between land-based, or recirculating, aquaculture and open-ocean pens as the industry matures. "I'm a partisan to the philosophy that there won't be one model of production," says Saraiva Gomes. "Those two models will constantly evolve, because they each benefit from technology development of the other."

Indeed, sustainability is key to both so-called Recirculating Aquaculture Systems, or RAS -- sometimes called Aquaculture 2.0 -- and the open-pen, ocean-based approaches. The older, ocean-based operations are scalable and capital-efficient, in terms of their payback potential, but have had environmental problems including invasive species, waste and the spread of disease and drug resistance.

Those problems can be managed in recirculating systems, though at lower profitability and lower returns on capital. "But that model is picking up, and there will be situations where it might make more sense for a recirculating facility to produce closer to the end-market, so the higher production costs can be compensated by lower logistics and distribution costs," he says.

Solutions to the environmental concerns of the open-ocean systems, and the capital-efficiency needs of the recirculating systems by rely on health and nutrition: "producing very robust animals with little disease," he says. "As technology develops for open water aquaculture, it helps with recirculating as well."

One example is the emerging hybrid production systems in which better recirculation systems are allowing juvenile fish to grow larger on land, making them more robust with better nutrition and few diseases, and reducing their time at sea

Sustainability is key to the industry's response to the squeezing of supply for fish meal. The growth of aquaculture strained supplies of wild-caught forage fish, driving up costs and calling the future of the industry into question. "So the industry had to pursue novel techniques to reduce fish meal and make feeds based on sustainable proteam, and we have achieve exactly that," he says. "The industry has not stopped growing because of the stagnant supply of fish meal." (See "Demand for Feed Attracts Innovators and Investors," and "These Insects Feed Fish That Feed People.")

Pontos Aqua counts as a competitive advantage its long-term investment horizon that lets it ride out the industry's volatility (which Saraiva Gomes says is often misunderstood as risk). Tinicum L.P. does not need to for exits within the five to seven years typical of other private-equity funds. Saraiva Gomes believes many of the problems that have bedeviled aquaculture stem from pushing industrial-paced growth in what are still fundamentally biological systems.

"We're talking about producing animals in a production system, where the animals live, eat, breathe and excrete in the same water," says Saraiva Gomes. "It accelerates mismanagement, and accelerates sustainability victims. If the industry exceeds the biological loads or doesn't apply best practices, nature will be very unforgiving."

All that volatility doesn't change aquaculture's long-term growth trajectory. Saraiva Gomes says current projections for aquaculture's growth (to about 220 million metric tons by 2050) don't take into account the increased yield from improved techniques. Aquaculture is the only major agricultural sector where the product still competes with a wild-caught alternative. The domestication of various species has just begun.

"I think all species -- salmon, tilapia, trouts or even low-cost freshwater species -- will continue to develop," he says. "These will be reinforced by emerging ones such as flatfishes, tunids, basses, lobster etc. Some of the strongest growth will occur in the low- to mid-cost marine whitefish -- for which there is great demand but where the market is still largely supplied by wild-caught products without real aquaculture substitutes."

Sustainability is also key to the emergence of fully packaged, branded aquaculture products that are known for their intrinsic quality as well as their production processes.

"Sustainability as a market force is undeniable," Saraiva Gomes says. "People want to know where their seafood comes from. I think aquaculture has all of the reasons to become the preferential source for the consumer once the consumer is educated where that seafood is produced and the advantages it brings."