The idea that a floating pool might be constructed smack dab in the middle of New York City's East River is amazing enough. The fact that this feat of architectural prowess may become a reality thanks to crowd-funding absolutely blows our minds.

This is precisely the scenario presented by +Pool, a sustainable design project that would bring a giant filtration system disguised as a pool to the less-than-pristine waters separating Manhattan and Brooklyn. Aiming to clean up to half a million gallons of river water each day, the impressive endeavor, imagined by architectural firm Family and the design office PlayLab, would allow New Yorkers the opportunity to swim in the East River for the first time in a century.

The project entered into headlines two years ago when ideas for the pool first surfaced on Kickstarter. Now the ambitious dream has inched that much closer to reality, as PlayLab/Family has a new Kickstarter page geared toward creating a test pool.

To learn more about the future of +Pool and the hardworking team of architects and designers behind it, we chatted via phone with PlayLab founder Archie Lee Coates IV. Scroll down to read about his plans for the East River of tomorrow:

What inspired +Pool? Was there one specific 'a-ha' moment?

Yeah, it was a hot summer! [Laughs] That's what we always say. Dong [Ping Wong, of Family] was the first to come up with it. He comes from San Diego where he was surfing everyday. Being in New York...he was a fish out of water. He looked at the East River as a barrier between Brooklyn and New York. You know, Bloomberg called it the sixth borough, but that just hasn't stuck. We dont think about using the river recreationally at all. So as an architect you think, What if we could change that or propose an idea that could change that? We decided to pitch [+Pool] to the world. We just had no idea the response we would get.

The pool is supposed to filter half a million gallons of river water every single day. So, in the simplest terms, how exactly will the filtration system work?

We describe it as a giant strainer dropped in the river. But that strainer is actually made of a fine membrane material. You can think of the pool as having a wall lined with a bunch of Britta filters. There are three layers -- a primary, a secondary and a disinfection layer. The primary layer takes out sediment and the kind of big stuff. It will bring the color of the water back to normal. The second layer is crazy powerful, but it is the disinfection layer that will remove the bacteria and viruses. It will do what chlorine would do, except that we won't be introducing chemicals into the East River.

You’re creating this test pool first. Should it come to fruition, will the public be able to partake in the testing?

Not for swimming just yet. The goal is to make it somewhat accessible and raise awareness that the East River is something we should be testing. In the future, it could become a greater possibility. A big part of our message is transparency and showing exactly how a project like this comes to life. We are actually doing something for the river and we want the pulic to see what this means. We would like to have some form of a public exhibition in DUMBO to allow the public to interact with visualized information at the very least.

Ideally, how would the pool function once it’s finished? Would it be privately funded? Would you hope that the city would take over maintenance and control?

We look at the High Line as a perfect model. It's both public and private in the sense that it functions like a public park -- it's free to the public, the public can use it. But it's offering all of this privately, because it's funded through a non-profit called "Friends of the High Line." This allows for the design to be kept intact and keeps beautification at a high level. That would be our goal, so that the project is not a burden on the city. We're not adding problems, but we are creating something that is a full-on part of the civic architecture of the city.

What’s amazing about the project is that you’ve been funding it through Kickstarter. How do you see this type of project affecting the future of architectural endeavors? Do you think the Kickstarter platform will allow for more egalitarian city planning?

Hell, yeah! Seriously, to be able to Kickstart or crowd-fund civic architecture is super exciting. We understand this is one of the first campaigns on this large of a scale. We are ambitious. But if this is what the public wants, they can chip and see their mark and their name on the project. It's an incredible thing. I never thought I would be a part of a project like this, nonetheless all of my friends and their friends and their friends. It defintiely set off a whole new line of projects. Now it's nothing incredibly new. There's the Low Line. The base of the Statue of Liberty was crowd-funded. Alexander Pope essentially crowd-funded the English translation of the Iliad, and he had the names of the 720 people who pitched in inscribed in the first edition. This was of course before the internet, but now we’re talking about civic architecture.

Have you found that you've run into challenges on Kickstarter in particular?

Sure. Kickstarter is new. Kickstarter is unprecedented, as is this sort of project. Trying to get $15 million [the total anticipated cost of the pool] at least partially funded, to run a small test on the river, is difficult. We did not think people would rally together the last time, but we over-exceeded our goal by almost 100%. Now [the new Kickstarter] is the thing that will prove it. At first we couldn't even promise that it will happen. All we could promise is that we would work as hard as we could to make it happen. But the future of this thing is becoming more tangible now. We've broken it down to these individual tiles that people can purchase. If every one is sold we can raise a quarter of a million dollars. But one of the biggest things about Kickstarter is that it makes you work and work and work for that. The public is our client.

For more information +Pool check out the Kickstarter campaign here, which will run until July 12, 2013. 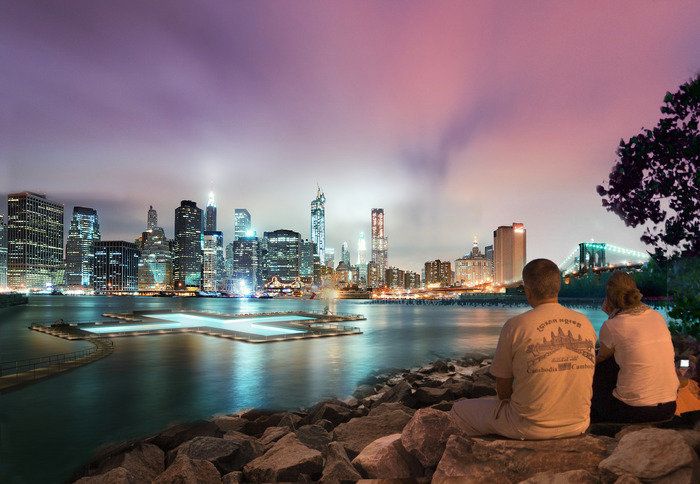