This Monday the American Red Cross, the nation's 'first responder' found themselves in need of rescue.

The century old institution was in the news not for its relief efforts on behalf of victims displaced due to the wildfires in California or what has been described as thousand year flooding in West Virginia. Instead this august organization was triaging damage that was self-inflicted as a result of its use of a poster "Be Cool, Follow the Rules" from a 2014 safe-swimming campaign. The White children in the poster are labeled as behaving in a "cool" way while children of color are depicted as defying pool rules and are labeled as "not cool." 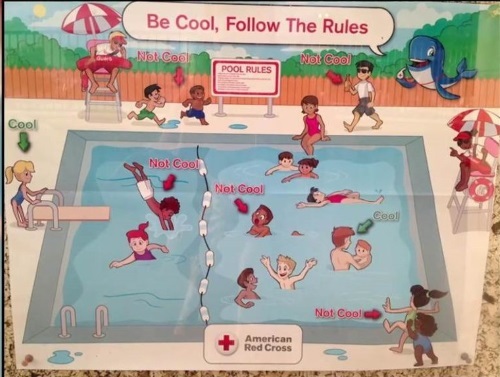 Many, including myself, find the poster insensitive and unenlightened at the very least -- and at worst perpetuating racist stereotypes. When I showed the poster to a White friend who works in media her immediate response was: "What were they thinking?"

The Red Cross apologized in a statement posted online Monday:

"The American Red Cross appreciates and is sensitive to the concerns raised regarding one of the water safety posters we produced. We deeply apologize for any misunderstanding, as it was absolutely not our intent to offend anyone. As one of the nation's oldest and largest humanitarian organizations, we are committed to diversity and inclusion in all that we do, every day. To this end, we have removed the poster from our website and Swim App and have discontinued production. We have notified all of our partner aquatic facilities requesting they take down the poster. Our organization has emphasized to our partners and on social media that it was absolutely not our intent to offend anyone and apologized for this inadvertent action. We are currently in the process of completing a formal agreement with a diversity advocacy organization for their guidance moving forward."(Read the full statement here.)

The larger question is how something so racially insensitive could have ever been deemed 'appropriate' for use in the first place. Was it that the individuals who created and approved the poster were not cognizant of the fact that for generations Black children and their families have faced discrimination at America's public pools and beaches? Were they not aware that Black people had been denied swimming lessons and had been barred from public pools? That those who did want to swim, especially young people, were forced to do so in more dangerous locations? Stories about drownings abound for generations of African Americans, and for many a fear of the water has not subsided.

It is often difficult to find regulation-size pools for swimming and diving in Black neighborhoods. Many communities have turned to splash parks as a cheaper alternative to maintaining pools, which means children never get a chance to truly swim. As a result, Black children have traditionally been less likely to take up swimming as a recreational activity or sport.

Were they not aware that the intersection of aquatic activities and racism is deeply embedded in our nation's psyche?

In 1964, civil rights demonstrators jumped into a segregated pool at the Monson Motor Lodge because the manager refused to let Dr. Martin Luther King Jr. and his guests enter the Monson Restaurant. The incident is well detailed in Clennon L. King's documentary "A Passage to St. Augustine". An iconic picture shows the lodge's owner Jimmy Brock, pouring acid into the pool and on the demonstrators.

Just last week a Texas grand jury decided not to indict former police officer Eric Casebolt who was seen on video throwing a bikini-clad Black teenage girl to the ground and pointing his gun at others at a pool party last summer in McKinney Texas, an egregious incident I wrote about at the time.

So to the Red Cross and organizations like it, I say:

While you "deeply apologize for any misunderstanding, as it was absolutely not [your] intent to offend anyone'' you would do well to acknowledge the lessons of history. Then put those to use going forward to combat the implicit bias and systemic racism that are very often at the heart of these matters -- seemingly at the water's edge, and just below the surface.