Back in 2003, Chicagoan Paul Cannella had a big problem on his hands. He had become somewhat obsessed with an unlikely household item: poop bags.

Between swiping the black plastic liquor store bags off kitchen counters at parties, always getting his groceries double-bagged and asking his mother to help save them up, Cannella could never seem to keep enough plastic bags on hand to clean up after his big yellow lab did his business.

Cannella finally turned to the Internet in search of a solution to his problem and, in so doing, learned how bad the plastic bags he'd been desperately collecting were bad for the environment. At that moment, he realized he was on the brink of a real opportunity.

The then-33-year-old proceeded to purchase the domain for PoopBags.com and began reselling biodegradable and compostable bags imported from a company based in Sweden through a Yahoo store he built.

A lot has changed in the decade since then. Today, his company is an award-winning enterprise that's seen "rocket-level growth" since its founding. The eco-friendly bags are sold in stores in four different countries and online in many more. 2014 is on track to be the company's biggest year yet.

Cannella works with manufacturers to sell three tiers of pet waste bags: the "original" series, plus the USDA-certified bio-based series and an "eco-eco" line that sells at a lower price point. The company has also developed new products beyond the bags themselves, like an eco-friendly dispenser for the bags that is 38 percent made of corn.

"Hopefully one day it'll be 100 percent," Cannella told The Huffington Post, saying he's waiting for technology to improve to allow for the materials to be sturdier. 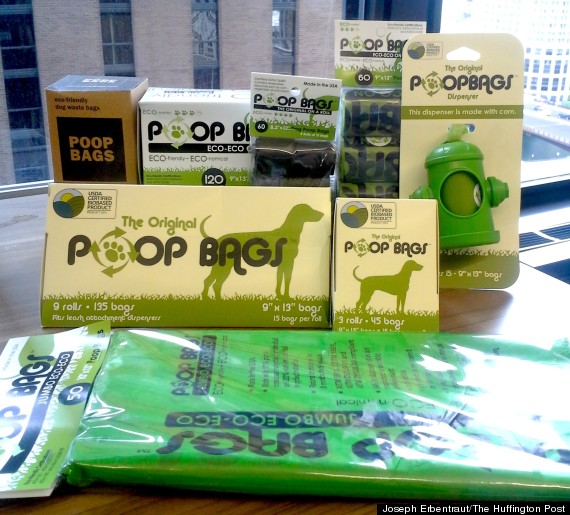 Traditional plastic bags that have been lining the pockets of dog owners for decades are among the between 500 billion and 1 trillion plastic bags consumed worldwide each year, based on estimates by the United States Environmental Protection Agency. Much of the plastic bag-wrapped pet waste winds up in a landfill, where it will remain for years to come.

PoopBags.com bags are different and are composed of three levels of earth-friendly materials. Their most eco-friendly offerings -- designated as "five paw" products -- are made from plant fibers, vegetable oils and starch and will decompose at a rate similar to other compostable materials like food waste and leaves. Their "four paw" bags are made of USDA-certified bio-based materials, such as corn and corn starch, that help them break down faster. The "three paw" eco-eco line is made of post-consumer and post-industrial materials and will also degrade at a far faster rate than plastic bags.

At a time when more pet owners are being urged to more consistently clean up after their dogs, many local governments are moving to ban most retailers from offering plastic bags to their customers. It's a move that makes one of the most accessible tools for pickup more difficult to attain -- a fact not lost on opponents of plastic bag bans.

That's where PoopBags.com's business has also gotten a boost, though Cannella said he attributes more of the improvement in sales to the buzz plastic bag legislation creates, increasing pet owners' awareness of how their decisions impact the environment. Dog waste contains parasites and bacteria and is one of the biggest contributors to water pollution. It also contributes to oxygen depletion.

"It's a bell curve. I think 10 percent of people are super eco-friendly and will buy top level poop bags and will pick it up if they saw someone else who didn't," he told HuffPost. "The next branch wants to be eco-friendly and will pay slightly more. Then there are the people who just use a grocery bag or whatever, and the last group don't care."

California is PoopBags.com's number one state in terms of sales, and has been so since before bans went into effect in cities like Los Angeles and San Francisco. While many Californian cities have already passed regulations on plastic bags at the municipal level, the state could become the first in the U.S. to ban the bags at certain retailers statewide under a proposal advanced by a key legislative committee last week.

"I think people will eventually see the bans as an opportunity versus a detriment," Cannella added.

With a market that continues to grow as more pet owners become aware of the environmental challenges plastic bags present, Cannella anticipates more competitors will emerge. He hopes to counter by pushing to make his company's products even more earth-friendly and to continue to develop new products that help pet owners tend to their furry friends in a responsible way.

"We of course want people to choose a bag from us, but we mostly care that somebody chooses to do their part in picking up, helping save the earth one poop at a time," he said. "It helps when everyone does their part and kicks in for the effort."