Is poop precious? Worth its weight in gold?

Not quite. But new research suggests that the organic materials (biosolids) generated by sewage-treatment plants may be an untapped source of gold, silver, platinum, copper, and other metals as well as rare elements like palladium and vanadium that are used to make cell phones, computers, and other electronic devices. Holy crap!

The scientists behind the research are looking into ways to identify and recover the elements and metals (which also include potentially polluting "nuisance metals" like lead). They say this might reduce the demand for mining and help curb the release of pollutants into the environment. 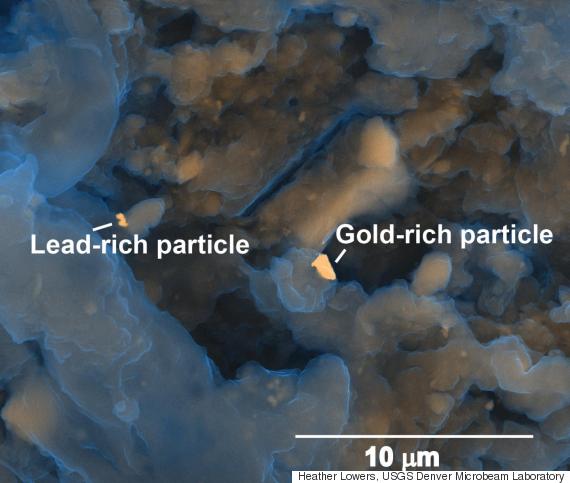 Micrograph showing microscopic gold-rich and lead-rich particles in a sample of biosolids.

"If you can get rid of some of the nuisance metals that currently limit how much of these biosolids we can use on fields and forests, and at the same time recover valuable metals and other elements, that's a win-win," Dr. Kathleen S. Smith, a research geochemist at the U.S. Geological Survey in Denver and one of the scientists, said in a written statement.

Metal, metal everywhere. The metal particles seen in biosolids are microscopically small--about 100 times smaller than the width of a human hair, Smith said at a March 24 press conference. And she said other, even smaller particles may also be present.

Exactly how do these microscopic bits get into our poop in the first place? Actually, the source of the metal in biosolids isn't yet clear, Smith told The Huffington Post in an email, adding that cosmetics, kitchen and laundry detergents, and other household products can contain small quantities. And when these substances go down the drain, they can wind up, along with feces, at wastewater treatment plants.

"The real challenge is to try to find a way to release and recover the metals so that they are in the correct form to be usable," Smith said in the email.

Each year, more than 7 million tons of biosolids come out of U.S. wastewater facilities each year, according to Smith. Roughly half is incinerated or sent to landfills, with the other used as fertilizer on fields and forests.

Big bucks. The economic feasibility of metal recovery would need to be evaluated on a case-by-case basis, Smith said in the email. But previous research conducted at Arizona State University showed that an average American city with a population of 1 million sends down the drain about $13 million worth of precious metals each year, International Business Times reported.

Smith gave a talk about the research in Denver at the 2015 national meeting of the American Chemical Society, which began on March 22 and runs through March 26.