I am a 29-year-old woman who, just a year and a half ago, pooped my pants while running a marathon. Perhaps you read about it in xoJane.com or saw my appearance on "The Doctors." Yes, I am now known for pooping my pants. 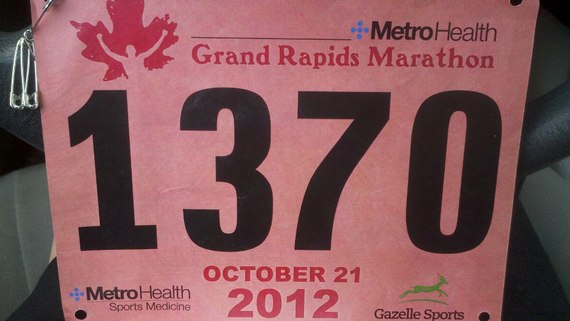 It was an incident that, while it was happening, was soul-crushing. In the moments after, I had a long 6.2 miles left to ponder whether I would hide my embarrassment from everyone or turn it into something positive. Clearly, we know what I did with this situation. Although my thinking wasn't positive in the moments after what I now refer to as "The Incident," once I crossed the finish line, every bit of depression, pain, embarrassment and uncertainty left me. I was ecstatic. I had ran 20 miles, pooped my pants, ran another 6.2 miles and crossed the finish line with a pretty decent time for a beginner (4:21:49, beating Oprah by about eight minutes!). When I met up with my friends and family who were waiting for me, the first thing out of my mouth was, "I pooped my pants!"

So, why write about and publicize an event in my life that should be mortifying? Well, a few reasons.

First, it's funny. Poop is a funny topic. We all do it, so it's relatable, and we don't normally poop our pants. Most times, we can reach a restroom before anything too out of control happens. Or maybe we do it more often than we think, but it's too embarrassing to admit.

Second, it's too embarrassing to admit. Is this because it's an uncivilized act? Or that in doing it, we have failed somehow? Or because it's just plain gross? (Because it really is.) However, I've never been one to get embarrassed easily. Plus, I have a self-deprecating sense of humor that made this topic an easy one to write about.

Third, women especially are told not to talk about it. According to... actually, I don't know who declared "women do not poop or fart," but whoever did, they're wrong. We poop and fart. A lot. Just as much as men, too. But society tells us that we don't. Huh?

In April, Vice did a great post about women and the number two taboo. (NSFW) They talked to a number of women candidly about poo, and I love it.

There are already so many things in this world women are not allowed to do because of our gender. In certain parts of the world, women are denied education. In America specifically, we have the wage gap. I could go on. In telling my story, it gave me an opportunity to fight the poo taboo. While not as serious as education or the wage gap, it's something that still bothers me. The reason being that women are told one more thing we're not supposed to do. If that makes me the face of fecal matter, I'm cool with it.

Since my story has made the rounds on websites, social media and television, I've received nothing but support and positive words from people I know and strangers who can relate. It means so much to me, especially because I am discussing a humiliating topic. There are times when, yeah, it is embarrassing to admit my claim to fame. I mean, "Hi, I'm famous for pooping my pants" is a pretty awkward ice breaker. Overall, I wouldn't change a thing. People have told me my story is funny and honest, which was one of my goals for sharing it. Plus, it has gotten people -- women especially -- to open up about that good ol' poo taboo, which I think is great.

And as for my future as a marathoner? I am currently training to run The Detroit Free Press/Talmer Bank Marathon in October. This time around, my goal is simple: Don't poop my pants.

More:
healthy livingmarathonHealthWomenpoop
Newsletter Sign Up
The essential guide to taking care of your mind and body
Subscribe to HuffPost’s wellness email
Successfully Subscribed!
Wellness delivered to your inbox