The idea of "financial inclusion" can seem abstract or difficult to comprehend until you put a human face on it. The picture gallery below does just that, showcasing the ingenuity, struggles and resilience of the world's poorest populations. Each year, photographers from around the world show us their take on financial inclusion by entering a photography competition run by the Consultative Group to Assist the Poor (CGAP), which is based at the World Bank. CGAP's mission is to help improve the lives of those living in poverty by making it easier for them to access formal financial services.

The winner of the 2013 CGAP Photo Contest is a compelling black and white shot by Vietnamese photographer Truong Minh Dien. Called "Rainy Afternoon", it captures a woman at dawn who is struggling against the elements to carry a heavy load of sweet potatoes to sell in a local market. The potato seller, 36-year-old Mrs. Nhung, lives in the coastal Rach Gia City in Kien Giang Province. The money she gets from selling breakfast potatoes at the Nguyen Trung Truc-Co Giang intersection helps feed her two children and husband, who suffers from a kidney disease. 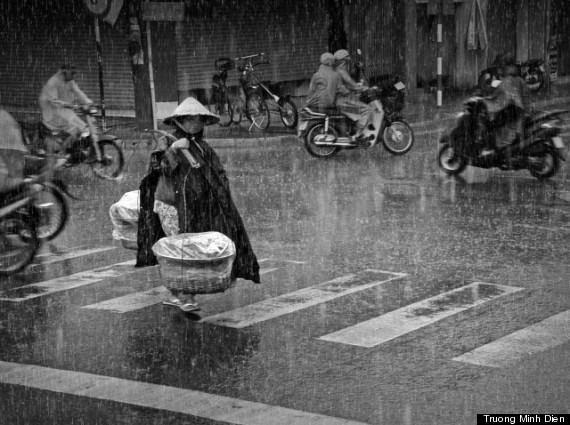 "This is my favorite picture because Mrs. Nhung is on my doorstep," said Truong Minh Dien, winner of the competition. "I'm into photography just because I want to record every day moments of life of the people where I live," he added.

Judges poured over nearly 4,000 entries from 91 countries before choosing the soulful picture from Vietnam. "The photo really captured a great moment," said Mohammad Rakibul Hasan, the 2010 CGAP Photo Contest winner and a guest judge for 2013. "This is a winner. You can almost hear the traffic," said fellow judge, Suzanne Lemakis, Director of the Department of Fine Art at Citigroup.

The competition, which was launched in 2006, shows in visual terms how poor people's lives are made better if they are not marginalized financially. Other pictures documented tasks such as workers in a tire retreading factory in Tanzania and a paper seller in Bangladesh, which won second prize for Md Farhad Rahman. Third prize went to Chinese photographer Chi Keung Wong, who attained perfect symmetry with a shot of two men pouring grain in a market in Mali.

Aside from the 29 finalists chosen by the judges, there was also a People's Choice winner which was chosen by popular vote on CGAP.org. A shot entitled "Talented Nesma", which was submitted by Mohamad Gouda of Egypt, won that category by a margin of nearly 400 votes. It shows a woman who leveraged a microfinance loan to build a painting and embroidery business.

Check out more photos from the contest in the gallery below.

What If Poor Weren't Marginalized?