We are getting into the thick of our mission to report on Concern Worldwide's emergency response to Pakistan's devastating floods. Susan Finucane, Program Officer, and I have flown to Karachi, provincial capital of Sindh, and have made our way by car to Thatta, the ancient center of Muslim learning and the more rural parts of Thatta district, where Concern Worldwide is working in close partnership with local organizations.

This is our first look at the destruction left in the water's wake. Thousands of villages in Sindh have been damaged, and the UN Office for the Coordination of Humanitarian Affairs (OCHA) estimates there are still up to one million homeless. Surveying the landscape, the statistics make sense. Highly vulnerable mud houses characteristic of the extremely poor province, were literally washed away in heavy flooding. Meanwhile, stagnant water in large areas of the province increases the chance of waterborne diseases, a risk factor that will get worse once warmer temperatures return in the spring. 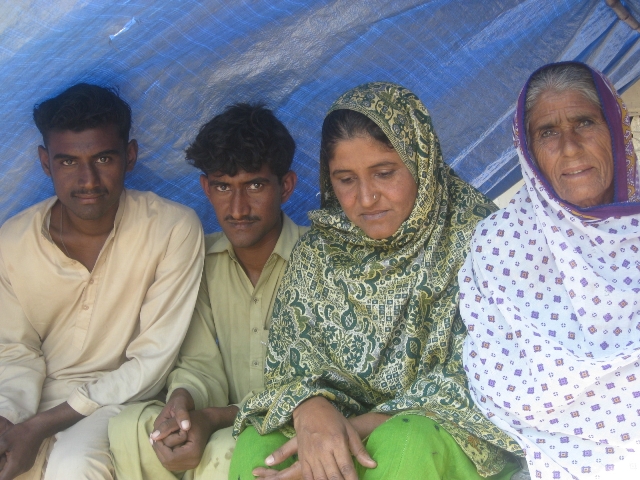 Zeenat, second from right, with two of her sons and her mother-in-law.
[Photo: Pakistan, Concern Worldwide]

It is jarring to see sudden 'lakes' appear in the arid landscape, with half-submerged telephone poles making it evident that these are still flooded areas. Roadside shrines and other simple structures clearly bear high-water marks -- up to five feet and more. Workers are building new brick ramparts everywhere, as hoped-for protection against future flooding. Tent camps dot the higher grounds.

Our first stop is in the village of Mongo Jakhro, a small community of just 30 households less than one and a half miles from the Indus River. Most of the families fled without being able to take along any of their possessions and they returned here only in late October, after spending two months or more at a spontaneous settlement outside of Thatta. Working with a local partner, Concern came to the village shortly after the families' return to distribute tarpaulins along with bamboo and rope frames. These crude but carefully constructed shelters are their homes for now.

"It is not easy living this way," said Zeenat Khaskaili, 36, a mother of five. "We are grateful for this shelter, which is much better than having to sleep in the open," she adds. Her semi-collapsed mud home stands just behind the two tents the family was allotted.

Life is decidedly rough, as most family members have to sleep on the bare floor, their few possessions scattered about. The children are dirty and have nothing to do. A local school was washed away in the floods. There are no latrines yet. Water and hygiene programs are the next step after the provision of shelter in the emergency effort.

"We need a reliable supply of drinking water, mattresses and bedding, as well as kitchen utensils," says Zeenat, adding that "a latrine is a priority." A WASH (Water & Sanitation and Hygiene) program will be next for the village.

WASH programs can make an enormous difference in the lives of communities. The village of Aboro Jakhro is a case in point. This medium-sized village is home to 198 households. At the height of the flooding the community was submerged in five feet of water and residents had been forced to spend 50 days in a spontaneous settlement in the nearby town of Makli. But with the villagers' eventual return came a transformation. 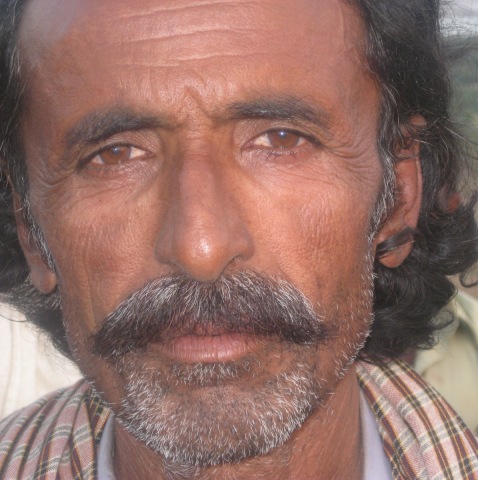 "We have learned how important it is to cut our nails, to wash our hair and wash our hands in order to stay healthy. We are wearing slippers now!" These were the excited exclamations of a group of animated women and girls gathered for one of the village hygiene refresher sessions. Compared to the dirt-strewn and chaotic environment of the previous village, Aboro Jakhro greets visitors with a positively bright, organized and clean-swept appearance.

"Before we never really thought much about hygiene," says Nooran Merbahar, a 32-year-old mother of five, "today we wash our hands before and after eating and after we visit the latrine." Hygienic discipline is paying dividends. "...our children's diseases have gone away," says Nooran.

Concern Worldwide has constructed 44 latrines -- plumbing-included, a rarity in rural Sindh -- across the village grounds, their temporary frames covered by bright-blue canvas. There are also three brand new hand pumps at strategic locations, each serving a cluster of homes. The old pumps had been destroyed or proved incapable of drawing up water from deep enough to avoid the flood-polluted ground waters.

Here, too, villagers are eager for a return to normalcy and especially an end to living in tents, but Concern's WASH program is an important first step forward. Accountability is key -- each program site is punctuated at regular intervals by posters listing numbers that villagers can call with questions or complaints. Local WASH committees -- one for women, one for men -- are being trained to keep things going even after Concern has pulled out. The process marks a transformation in the community's way of life prior to the floods.

Ghulam Mustafa heartily agrees. This 46 year-old father of six heads the men's WASH committee in the spontaneous settlement of Ed Gah. The camp is the temporary home of 128 families; it is perched on a hill overlooking a river and the almost completely submerged remains of their village beside it: "Many of the diseases we were struggling with have largely disappeared," he says with a smile that demonstrates a leader's pride.

"We had to follow women's lead in paying more attention to what happens in our home," he says, stressing that the well-being of the young is a top priority. "The children are our future," he insists, echoing the message conveyed at hygiene sessions.

The road to recovery for the very poorest people in Sindh will be a very long one. But their journey has begun in earnest.