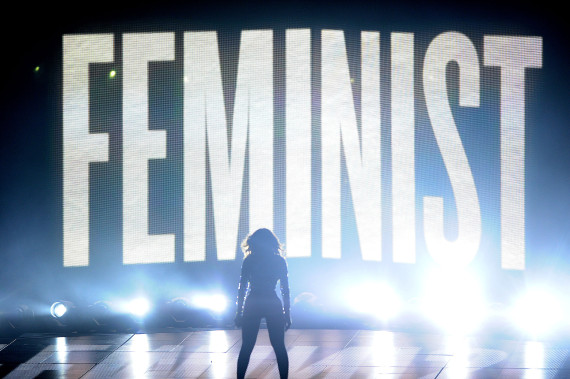 In the backlash years of the '80s and early '90s, feminism was "the f-word" and stereotyped as uncool -- a label applied to hairy-legged, Birkenstock-shod straw-women who were either excessively intellectual, out-of-touch harpies or tarot-reading, goddess-worshiping weirdos. To claim the feminist label was to declare yourself a living, breathing hang-over from a time when collective activist movements made headlines.

Starting sometime around the release of Spiceworld, that very slowly started to change. Today, feminism is the bleeding edge of pop culture. Maybe it's because tarot and Birkenstocks are cult-cool now. Or maybe the negative stereotypes have been forgotten entirely. Ads that appeal to women's independence -- the modern cousins of Virginia Slims' "You've come a long way, baby" -- are too numerous to count. Many of the biggest stars in the world call themselves feminists, proudly performing in front of the word in giant neon letters.

In her new book We Were Feminists Once, the writer and cultural critic Andi Zeisler calls this phenomenon "marketplace feminism," a convenient packaging that companies and celebrities can use to sell themselves as more substantive, woman-friendly, and change-making than they really are. Moviegoers know what the Bechdel test is, but the barriers to Hollywood acceptance remain prohibitively high for anyone who isn't a white dude. Companies from Verizon to Always to Spanx promise empowerment as a selling point, yet women are still hard to find in the corridors of power, from Congress to corporate boards. The word feminism, Zeisler writes, is now used interchangeably with words like strength, authority, wealth, and happiness. She makes a convincing argument that, as a result, feminism these days is more personal ideology than broad-based activist movement.

The modern self-labeled feminist, Zeisler argues, is binge-watching Orange Is the New Black while courts continue to lock away women who were simply defending themselves against an abuser. She is celebrating Transparent's Emmy nominations, meanwhile hate-fueled bathroom bills spread across the country. She was outraged that the NYC subway wouldn't allow ads for period underwear, but isn't sure what to do about the fact that state legislators continue to pass abortion-restricting laws. Her book club read Girlboss, but she has no idea that domestic workers are organizing for better legal protections in her own state.

Zeisler sees this as a failure, and she's done a service by cataloging the disconnect between marketplace feminism and the decades-old movement for justice and equality. But as wary as I am of "empowering" undergarments and feel-good TV, it's possible that they could be gateways to something more substantive. Maybe I'm a wide-eyed optimist, but I believe there is potential for this hypothetical woman to do more than watch Broad City in her feminist granny panties -- if she realizes that real feminist change requires more action than swiping a credit card or setting a DVR.

The low-bar requirements of marketplace feminism might actually make a friendlier introduction to feminism than leaping into the movement. Feminism, Zeisler acknowledges, has a poor track record with being inclusive and forgiving. Even though I wasn't alive in the '70s and didn't go deep on feminist activism when I was a college student in the early 2000s, I got my taste of movement drama when I was a feminist blogger from 2004-2010. I found some great community in the feminist blogosphere, sure, but by the end I absolutely hated it. To opt into a group of active feminists is to adhere to the lines they draw around themselves. Write the wrong thing, or fail to support the right cause, or use the wrong word, and the feminists who consider you one of their own are quick to call foul. "Most of us know the drill," wrote the writer and activist Ngọc Loan Trần a few years ago. "Someone says something that supports the oppression of another community, the red flags pop up and someone swoops in to call them out."

There is power in broad political movements, but they ask a lot of the people involved. It is a time-consuming, exhausting pursuit to declare yourself part of a movement for direct action, especially when the cause is as broad and as variably defined as feminism. Not everyone can be a devoted activist. For the rest of us, there's casually worshiping Beyoncé and taking our politics into the voting booth and fighting with our partners about chores and making small donations to organizations we support and, yeah, making personal decisions about how we present ourselves to the world. I don't actually think these things are small potatoes. Daily choices and personal experiences are important front lines of feminism, too.

But many of us should be setting the bar higher for ourselves. The reality is that if you're buying $45 underwear with the word feminist on it, you can afford to spend a little time and money supporting more explicitly activist causes, too. This is the potential in the mainstream embrace of all things labeled feminist. Zeisler writes that feminism isn't supposed to be fun. But I see some truths in the much-blogged quote often attributed t0 Emma Goldman: "It's not my revolution if I can't dance to it." Sure, some truly committed people will sign up for an activism that exclusively involves legislative slogging, in-person protests, and intramovement politics. But that number is doomed to stay small. Activism can't make a difference if it's all sketch-comedy satire and snarky enamel pins, but a staunch commitment to no-fun feminism is really hard to sustain, too.

Get people dancing, and it's possible to pull them into harder, more meaningful activist work. Near the end of her book, Zeisler name checks an impressive list of political efforts that have cropped up in the years since feminism became cool -- HollaBack, Black Lives Matter, the National Domestic Workers Alliance. Where Zeisler sees a disconnect, I see a pipeline. The answer isn't to roll our eyes at the Bechdel test going mainstream or granny panties becoming marketable. It's to see those things as a starting point.

More from The Cut:
Brie Larson Is Allegedly the Front-Runner for Captain Marvel
Young, Black, and Watching 'Roots'
A Condensed History of Michael Bay Being a Sexist Jerk
Donald Trump Thinks Letting Women Work Is 'Dangerous'

Pop Feminism Doesn't Mean The End Of The Movement
The Multiple Facets Of Modern Feminism
1 / 11
Social Media Feminists: Laura Bates
Laura Bates, founder of the <a href="http://www.everydaysexism.com/index.php/about" target="_blank">Everday Sexism Project</a>, has a simple mission - to raise awareness of the sexism that still exists "in a modern society that perceives itself to have achieved gender equality". Bates seeks to overturn this perception with an open invitation for all women to record their personal daily experiences of inequality online. The project has already garnered a collection of over 10,000 women's anecdotes. Aiming to remove the 'uptight', 'prudish', 'militant', 'bra burning' labels historically associated with feminists, Bates is one of a new wave of feminist activists using social media and technology to make feminism more accessible to all women.
YouTube