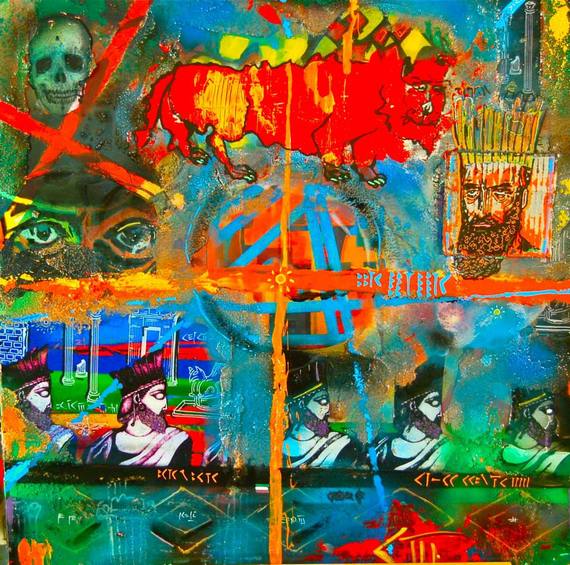 I visited Iranian-American artist, Manu Marzban at his home/studio, in the hills above Cannes and was delighted to see the interesting turns his art has taken since I first reviewed his work. I like the unpretentious and playful quality of his work and thought it was time that I let him explain the way his mind and his art work.

Manou: These last twelve months have been quite a ride, an eye opening experience in the art world. I have come to realize how hard it is for an artist to break through. I found the whole experience to be quite educational. For my art, the key element was the reaction that my art drew from different audiences. That reaction made me want to cater more, in a more popular fashion, to a responsive audience.The reaction to the first works, 'Streaks', which did not include faces or narratives, was very positive -- but what bothered me was that people would look at them, seem to enjoy them, and just move on. I felt that I didn't' engage my audience enough. I realized then that I am a story teller and making decorative art was not enough for me, I needed to speak and provoke my audience. I had a 'eureka' moment when I was walking around Berlin, after an exposition, and was captivated by the street art. The street art in Berlin is full of energy and tells volumes. You literally go on a visual journey that works because the series of words and images are juxtaposed in such way that make you ponder stories rather than just be stimulated visually. It occurred to me, during one of my meditations on the walls of Berlin, that it is a shame that you cannot physically take the graffiti home with you. And that is what made me decide to do the 'Streets' and the 'Pop Collage' series. I wanted to make street art that you could take home with you and hang in your living room.

Me: What do you think made these paintings such a hit?

Manou: I think people can relate to them. Because the images I use come from a lexicon of popular symbols and icons. I mix that urban grammar with my own visual creations and thread it with a narrative. So this combination of image and text is used to construct a narrative. The story telling aspect of the art is what keeps the attention of the viewer. Suddenly people were standing in front of my art for much longer than before trying to figure out the story. That was a great feeling. Also, what helped make my next exhibitions so popular was that I decided that I am not a "wine and cheese opening" type of artist. My art had too much energy to be contained with decorum. So the exhibits became events in which I used multimedia and audience participation. Basically the exhibits themselves became the art installation.

Me: I remember attending one of those events at BSpot in Nice. It was really quite a lot of fun. More like a party than an art exhibit. Who do you paint for? Who is your 'dream audience'?

Manou: I think given, the kind of art that I do, the most receptive audience are people who lived through the sixties and seventies. And younger people too have been very positive when encountering my art. I approach my art from a comical angle. I want to be satirical but not burden the viewer with heavy judgment. But I was pleasantly surprised at how the Iranian community reacted to me. When I was first asked to have a show in Paris at Gallery Nicolas Flamel, owned by Iranian-French Yassi Metghalchi, I wanted to make sure that my exhibit was a non-traditional multimedia show rather than a polite Persian art exhibit. I was very impressed at how the Metghalchis and my promoter, Hessam Khalatbari were receptive to my ideas and helped make the show a sellout success.

Me: How did it feel to sell all your art in one show? I saw a picture of you and the Shahbanou, Farah Diba, the wife of the late Shah of Iran, who is a great patron of the arts, having known Andy Warhol and many other giants of 20th century art -- that must have been a great endorsement for you?

Manou: It was an incredible feeling to sell everything I had painted and to see that so many people appreciate my work. Meeting her majesty, the Empress, who has endorsed so many great Iranian artists for the past fifty years, was both a humbling and an inspirational experience for me. Besides the Iranian community's positive reception I was thrilled to see people from a variety of backgrounds. It was truly a cosmopolitan show including even some international celebrities.

Me: There is a lot of art being produced out there. Your art strikes me as unpretentious and that is what I find refreshing about it. What label do you try to avoid?

Manou: I like to be an entertainer. What excites me is that my pieces entertain the people who look at them. These images can mean different things to different people. Some artist might find 'entertainer' to be a shallow label, but I am not ashamed of my desire to entertain. I consider myself a popular artist, meaning a populist, one who caters to people's imagination, not one that belittles them. I don't want to be known as merely a decorative artist or as an abstract artist like the first series were headed. Mine is an accessible art that can captivate equally my children's friends and my own peers. 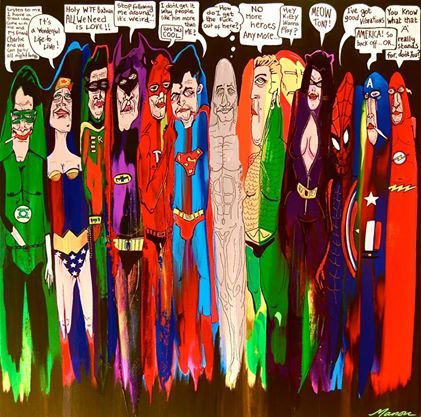 Me: There is a playful quality in your work that I wrote about earlier, how do you maintain that and keep from becoming boring or jaded?

Manou: Since I collected comic books as a kid, I have been an avid consumer of visual and textual information. I am a film aficionado -- I read voraciously, I spend my days taking in lots of new information and data from the internet and other media. I keep up to date with news and popular culture. I follow musical and cultural trends. This helps keep my eye fresh. I plug into the visual library of my mind to pluck new images to help me narrate.

Me: I like your work because I see a very pure boyish quality in it, all your pieces look like you had fun making them, while engaging and intriguing they are never too sad or too serious. Has being a father, always around games and toys, influenced your work?

Manou: I certainly use the culture, because that is what it is, of my sons, who are both in secondary school. It keeps me connected to a new generation. When my art works with them as well as with my peers then I know I have a keeper. I use their old toys to create sculptures. I did a piece solely made up of Kinder Surprise prizes and another using toy soldiers to create adult political story lines.

Me: Your art has evolved enormously. You went from painting "Streaks" and the more decorative pieces to the "Freaks" series via a detour through use of objects in narrative collages; your distinctive style has endured this branching. Why do you think you succeeded in developing a signature style? What is the next stop in your artistic journey? 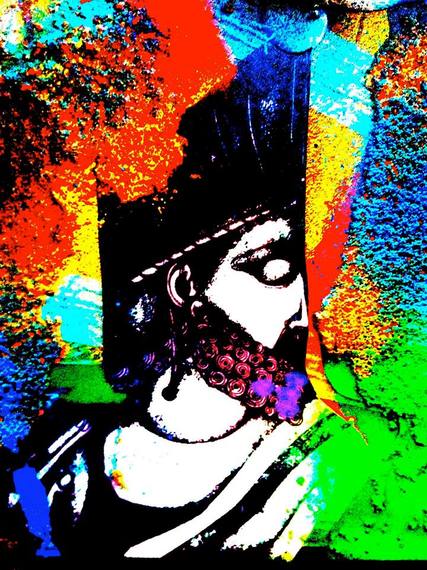 Manou: The one thing that fascinates me as a Persian is our past. A lot of the Iranian art that I see is very heavily political or very traditional. No one has played with these images of Persepolis ruins in a pop fashion. I wanted to lighten up that past and make the symbols more vibrant and contemporary. In other words I am tired of the heavy presence of old ruins in our psyche. I wanted to take those images of our glorious past, paint them in color, and toss them into a future that is hopefully less heavy. 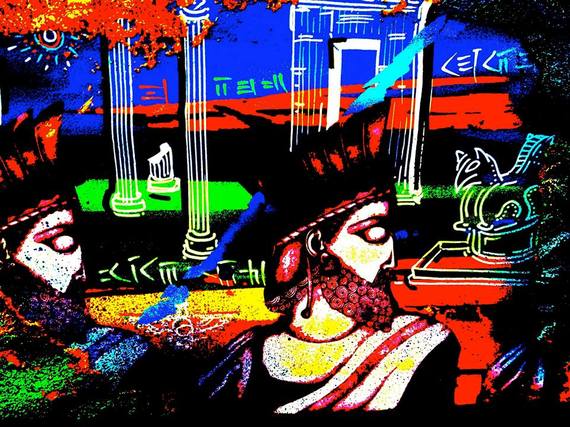