For many Americans, weekday breakfasts are eaten in haste, if at all. Yogurt is packed in squeeze tubes, granola bars are pocket-sized and even cereal and milk, ever a staple, tends to be scarfed down while simultaneously packing a book bag at home or during the morning commute.

And then there are Pop-Tarts. Plop 'em in the toaster -- or don't (Editor's note: But do, for raw Pop-Tarts are loathsome) -- and move on (fast!) with your busy day.

First brought to shelves in 1964, Pop-Tarts were revolutionary because their fruit filling didn't need to be refrigerated. Mothers' worries could be put to rest: Their children could enjoy a "healthy" (fruit!) breakfast while on their way to school. Plus, the food didn't mess up the kitchen. At the product's inception, there were four flavors to choose from: strawberry, blueberry, apple-currant (later changed to apple-berry) and brown sugar cinnamon. Fifty birthdays and dozens of flavors laters, there is still something about Pop-Tarts. While the sale of other sugary junk food like soda and cereal has declined, Pop-Tart sales have gone up for the past 32 consecutive years, The Wall Street Journal reports. 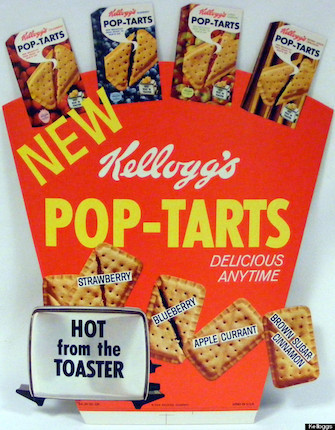 Thanks to the Pop-Tart and other morning food products, it was in the 1960s that the pervasive "ain't-nobody-got-time-for-that" attitude surrounding breakfast emerged. The Pop-Tart symbolizes something much bigger than the unbroken trend of efficient grab-and-go breakfast foods. It represents the frenetic culture and feel of the decade. It stands for a decline in the tradition of shared family meals that has only become more pronounced since the toaster pastry first hit the shelves.

By 1960, women made up more than one-third of the workplace; three years later, Congress signed the Equal Pay Act, which aimed to abolish wage inequality and other discrepancies between working men and women. Women became better equipped to enter the workforce as technology helped to expedite the responsibilities expected of housewives. "With the help of a dishwasher, a washing machine, and an occasional frozen dinner, [working women] could undertake that employment without endangering their family's living standards," writes Ruth Schwartz Cowan in More Work For Mother. Convenience foods -- like Pop-Tarts and cereal, which took hardly any work at all -- may have been directed at children, who as a result "could make their lunches and their breakfast themselves," Schwartz Cowan writes.

Second-wave feminism had its beginning in the 1960s. Enthusiasts spent time fighting for gender equality, which, perhaps, affected their ability or desire to pour a glass of freshly squeezed orange juice for their husbands and kids (call it a coincidence or don't, but in 1964 a General Foods product called Awake, a synthetic orange juice, was introduced. A year later, Tang hit the markets).

There are contradicting stances about women's views on household and kitchen work during this time. Food expert Michael Pollan has written that Betty Friedan's The Feminine Mystique, which some consider the Bible of second-wave feminism, "taught millions of American women to regard housework, cooking included, as drudgery, indeed as a form of oppression." Others argue it was postwar industrialization -- not resistance to "women's work" -- that brought the focus away from home cooking and spotlighted convenience products and dining out. Regardless, however, products that made it easier and faster to prepare food were growing in availability.

Indeed, Pop-Tarts were not the only "instant food" to fill grocery carts during the 1960s. Instant coffee, which was initially developed for soldiers who didn't have the luxury of a percolator in their bunkers, became a nationally distributed product. Pantries across the country were stocked with the stuff, marketed as being just as tasty as the percolated version. Maxwell House Instant Coffee, Folgers' Instant Coffee, Nestlé Instant Choice and other brands vied for the attention and the wallets of American consumers.

The new type of cup of joe was convenient. You could pour yourself a single cup if you didn't want to brew an entire pot, and coffee-making skills became gratuitous: Virtually anyone could pour a cup of hot water over the pre-ground beans. Now, as the TV commercials pointed out, wives could ease their anxieties about making a great-tasting cup that would please their guests' taste buds.

Naturally, instant creamer followed suit: In 1961, Nestlé's Coffee-Mate, a non-dairy powdered creamer, hit the shelves, enabling the time-pressed to craft the perfect cup just about anywhere. Women could worry less about having fresh cream on hand, too, since the new coffee aid could last without being refrigerated and would stay fresh much longer than ordinary milk.

But refrigerators probably were stocked with milk. Cereal production exploded in the 60s; today's children may have favorites that originated decades before they were born.

Yep, Lucky Charms, Cap'n Crunch, Honey Comb and Apple Jacks cereal all emerged in the '60s. Other modern favorites, like Total, Frosted Mini-Wheats, Froot Loops and Fruity Pebbles have roots in the decade, too. Just like the Pop-Tart, the ease of serving a bowl of cereal is obvious: Pour into a bowl, add some milk and enjoy the sound silence from the children.

Cereal was an attractive buy for several reasons beyond the convenience: First, it was targeted at children, with colorful boxes, prizes and cartoon characters that made kids want it. Since most of the cereal items marketed to children were nearly all sugar, it's likely that kids would crunch away instead of asking for something else to eat.

It was also a meal children could assemble themselves -- no flames or knives required. Even cleanup, which for lazier tots may not have gone beyond leaving the empty bowl on the kitchen table, was child-proof. "With the rise of feminism in the 1960s came an increased demand for foods that would move liberated mothers out of the kitchen," writes Heather Arndt Anderson in Breakfast: A History. Anderson adds that "new sugar cereals continued to be introduced every year. This may have been the market's predictable response to an increased demand, but was just as likely an advantageous coincidence that allowed American mothers to justify stepping away from the stove."

Today, even though Americans are swapping cereal for other, even more convenient breakfast alternatives (think bars and portable Greek yogurt), around 90 percent of American households still report purchasing it. In 2013, cereal yielded $10 billion in sales; it remains the most popularly purchased breakfast food.

The trend toward faster and more convenient breakfasts is undeniable. It doesn't matter whether it's a pot of exotic Icelandic yogurt or a handful of Frosted Flakes: Americans have not come close to shaking the ritual of making weekday breakfasts into quick meals. Breakfast can be consumed on the fly; tables and utensils are rarely a necessity.

Yes, convenience is convenient, but in the case of eating (especially in a country where more than one-third of the population is overweight), it'd be a good idea to slow down.

Multitasking at breakfast, whether it's to finish up some remaining math problems or pack for a business trip, can be harmful to the waistline. A report published in 2013 in the American Journal of Clinical Nutrition reveals that distracted eating tends to make people eat more. Those who pay attention only to their food while ingesting it eat less and are often less hungry later on in the day. "When you're distracted, you can't really pay attention to the taste and textures of your meal, so you rob yourself of the eating experience, which can leave you feeling both overly full and unsatisfied," Cynthia Sass, R.D. told Shape Magazine. 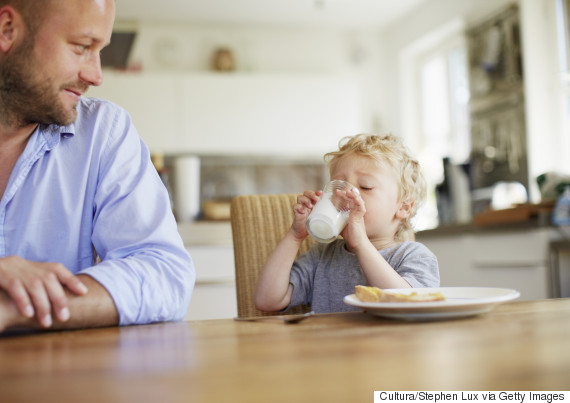 Moreover, since the task of eating breakfast can be checked off the list quickly and in any location, the importance of sitting down for the meal as a family or group of friends has diminished. For some, eating breakfast while sorting email is considered a luxury, and it's made possible by foods that don't require pots, pans or heating up (the worst damage that can be done is a couple of stray crumbs wedged in between the keyboard keys). As harmless as this may appear, those who eat breakfast solo while multitasking are missing out on the benefits that come from eating with others. A 2012 Cornell University report highlighted how destructive it can be to skip out on social meals, particularly for children. The report suggests that kids who do eat family meals at the table may be 35 percent less likely to engage in disordered eating, 24 percent more likely to eat healthier foods and 12 percent less likely to be overweight.

These numbers aren't specific to breakfast, but the morning meal can be considered the gateway drug to fast, on-the-go lunches and dinners, aided by the availability of foods more likely to be eaten alone. There's nothing wrong with munching on a Pop-Tart every now and then (though you could do better). But at the very least, it'd be wise to eat that breakfast pastry while seated and engaged in conversation with a family member or friend.