Remember those childhood days when the world held wonder and amazement? When a shooting star was a lucky sight and the idea of a Willy Wonka chocolate river actually seemed totally plausible? Transitioning into the adult years usually puts an end to that kind of magic. But designer Jolene Carlier is hoping to bring a little of it back into the most basic of things: popcorn.

With inspiration from Willy Wonka himself, Carlier took to reinventing the mundane process of making popcorn into something beautiful. Popcorn, which is now so often made in a prepackaged bag in the microwave, is actually an exciting snack to make. Just take a look at corn popping in slow motion for proof of that. With that in mind, Carlier created a machine that highlights the magical process of popping corn. Take a look at this thing. 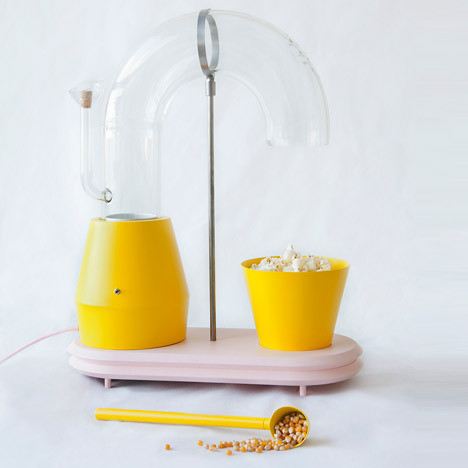 Here's how it works: Corn kernels are placed in the compartment on the left. Once the heat is turned on, the corn starts to pop as kernels are apt to do, and the hot air blows the popped corn over the glass tube into the waiting yellow bowl. It's a beautiful sight. Watch the video above to see it in action.

Sadly, you can't buy the Popcorn Machine at the moment, but Carlier is looking to put it into production in the near future. Stay tuned.