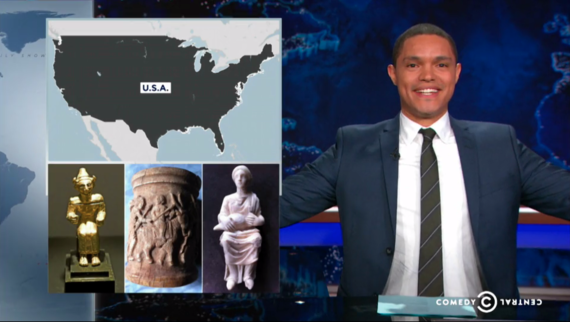 Popular culture is no stranger to archaeology. The subject has made its way into some of America's favorite movies, TV shows and video games. But archaeology has most often been referenced in popular culture as a novelty, and much of that is a result of its most famous pop-culture icon, Indiana Jones. Although times have changed since Harrison Ford made the fedora famous, the portrayal of archaeologists in popular culture and the work that they do has not. But archaeology has evolved since the days of 'Indy' chasing Nazis and with it the nature of heritage crimes. With the growing instability in the Middle East and beyond culture is under threat now more than ever. Enter: The Daily Show. 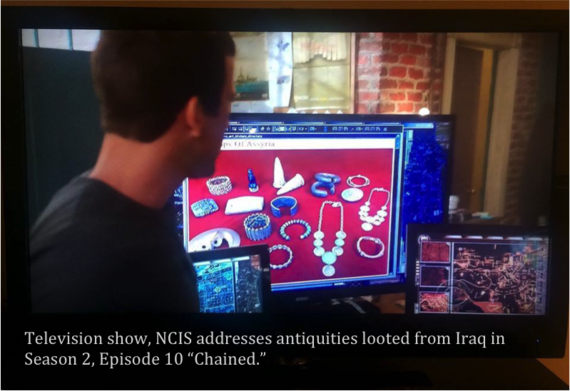 Saving culture under threat doesn't require whips or involve running from boulders (let's be honest, real archaeology never did), and donning the fedora is optional but not necessary. What is necessary for protecting heritage is an intimate understanding of the complex social, political and economic circumstances of countries in crisis. As global politics becomes increasingly complex the general public is less likely to follow the continuous stream of conflict news, let alone the way it is affecting their history and heritage.

The Daily Show on Comedy Central has built its reputation on comedy that informs and engages. The impact that The Daily Show and satirical talk shows have on the public's knowledge of current events should not be underestimated. In fact, a study conducted in 2014 revealed that viewers of American satirical talk shows like The Daily Show and The Colbert Report are not only more informed than the average consumer of televised news, but are among the most informed and knowledgeable viewers on politically related topics.

As the former host of The Daily Show, Jon Stewart was-well known for his charismatic ability to break down even the most convoluted of Middle East issues in terms that those who are lucky enough to have escaped the juggernaut of current-events-junkyism could understand. Although there has been a changing of the guard at The Daily Show's, its impact on the public's knowledge of the complicated Middle East has not. On Tuesday evening, new host Trevor Noah dove head first into the atrocities of ISIS. He brought attention to the issue of conflict antiquities that until now, has only been a topic of interest among the archaeological community and more recently, the press. ISIS loyalists have engaged in extensive cultural racketeering, systematically looting antiquities as a means of funding their terror campaign. Recent reports from the State Department regarding the US raid on ISIS leader Abu Sayyaf's compound reveal clear evidence of a well-established antiquities trafficking network. What is equally troubling, or at least what should be troubling to the American public, is that one of the largest consumer markets for illicit antiquities is the United States. The American antiquities market is funding the very terror group the US government is seeking to eradicate.

But despite the constant stream of conflict-related news coming out of the Middle East, it's still unlikely that the public would take notice of the details of ISIS financing in their daily digital digest. The average online shopper is largely unaware of the surging illicit antiquities market ISIS has syphoned for financing before browsing on eBay or scrolling through Twitter and Facebook (all sites where looted antiquities often appear for sale).

On Tuesday (September 29th), The Daily Show's Trevor Noah introduced his public to 'blood antiquities' and shed light on the absurdity of the US consumer market for these trafficked artifacts QVC-style. He blasted the hypocrisy of ISIS funding their efforts through the sale of the very "idolatrous" artifacts they condemn. Noah was able to bring attention to culture under threat the way only a Daily Show host can: highlighting conflict and hypocrisy through pop-culture and humor. With the show's long-standing track record of informing viewers and influencing real policy, Trevor Noah may have just opened a Pandora's box of challenges for the art market. The acknowledgement of archaeology in popular culture has come a long way from the adventure fantasies of Indiana Jones. But one thing about heritage hasn't changed: