It is easy to predict that the visit of Pope Francis to the United States of America this week will go down in history. But will it be able to change the future? 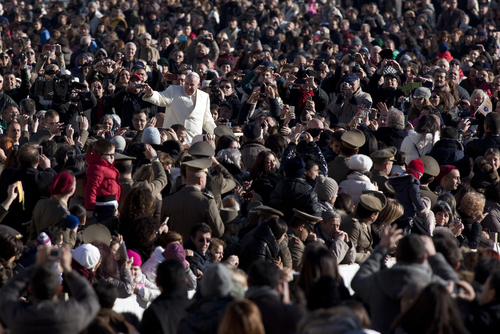 In the history of religion, great things happened when religious leaders stood in solidarity with the people. Think of Moses, who is revered by the three Abrahamic religious traditions, Judaism, Christianity, and Islam. Which observers in the ancient world might have predicted that the Hebrew slaves would eventually go free?

In the history of Christianity, Jesus is the prime example of standing in solidarity with the people, even though his mother Mary took the first steps in her Song of Praise: "[God] has brought down the powerful from their thrones, and lifted up the lowly" (Luke 1:52, NRSV). Many others followed.

In the history of the United States, great things happened when political leaders stood in solidarity with the people. Abraham Lincoln could not have freed the slaves without broad-based support from the people, including the enslaved African Americans themselves. Martin Luther King, Jr. would not have been such an effective leader of the Civil Rights movement without wide-ranging popular support.

Pope Francis, who is widely considered to be the "people's pope" belongs into this group of leaders standing in solidarity with the people. The approval ratings for his primary concerns in the United States just ahead of his visit are strong.

The two concerns that rank at the top of a CBS News poll are Pope Francis' support for the concerns of the poor (84 percent of American Catholics approve, only 8 percent disapprove) and his support of environmental issues (68 percent approve, 15 percent disapprove). Controversial issues of the unequal distribution of wealth, abortion/same-sex marriage, women, and immigration also rank high.

Pope Francis' legacy is not in doubt. That a Roman Catholic pope is taking clear stands on these issues, siding with working people and the environment rather than with the elites, has already made history. The future of this legacy is what interests us, and two things are of particular importance in trying to gauge it.

First, the concerns of Pope Francis are not the unheard-of, extremist ideas of yet another demagogue. Pope Francis' concerns for people and the globe are deeply rooted in the long history of religion and the church. He chose St. Francis of Assisi as his namesake for good reasons, linking not only to an individual but to a movement. These concerns have always been alive, even though sometimes pushed under ground.

They surfaced again in the twentieth century, when in 1968 the Conference of Latin American Bishops in Medellín, Colombia, agreed that the church should commit to a "preferential option for the poor." This was seen as God's option in the Bible and it can be joined by anyone, including the rich and the powerful. This option continues to shape the twenty-first century in many ways (see, for instance, Joerg Rieger and Kwok Pui-lan, Occupy Religion: Theology of the Multitude, Rowman and Littlefield, 2012).

Second, the future of Pope Francis' concerns is not tied to one powerful individual. These concerns resonate with people of faith not because they worship celebrities but because they worship a God whose leadership is exercised in solidarity with the people. Leadership matters long-term only when the people themselves become leaders -- a lesson that is consistently missed by the various empires in history and today.

The future of the poor, of racial and sexual minorities, of working people (to which 99 percent of us belong), and of the environment, is never entirely in the hands of individuals, no matter how powerful they may be at the moment. This is true whether these individuals support us or whether they oppose us. Our future is in the hands of all of us as we find inspiration in leaders like Pope Francis and guidance in the traditions of the people to which many of our religious traditions belong, and as we discover our deep solidarity with the people and the globe.

This solidarity will be more and more difficult to divide the more people become aware of our deep connectedness in the face of what Pope Francis has called an economy that kills (Evangelii Gaudium, 53, 2013). And it will further connect people of faith with the popular concerns for fairer wages, better health care, family and sick leave, ending wage theft, equality in all walks of life, and protecting our environment.